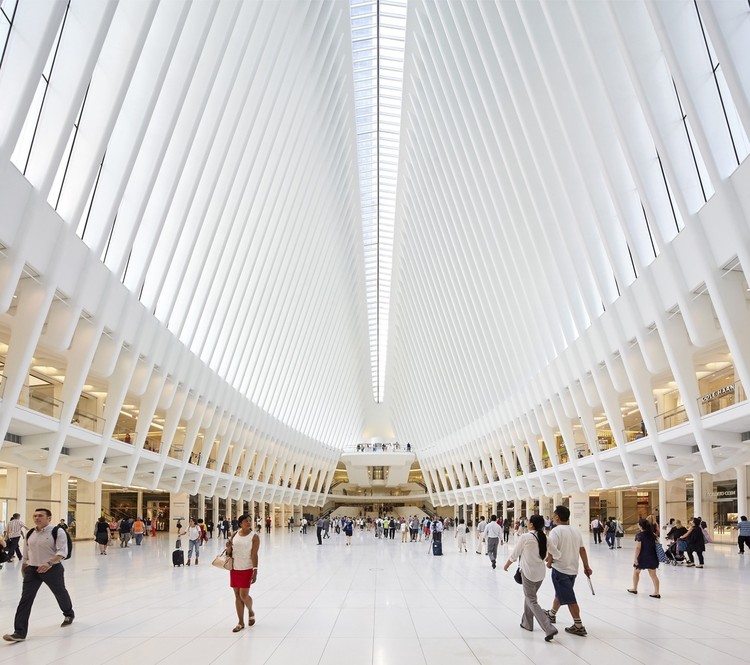 Text description provided by the architects. The Transportation Hub is conceived at street level as a freestanding structure situated on axis along the southern edge of the “Wedge of Light” plaza. As described in Daniel Libeskind’s master plan for the site, the Plaza is bounded by Fulton, Greenwich and Church Streets to the North, West and East respectively and Tower 3 to the south. It links the procession of green, urban spaces that extend along Park Row from City Hall Park to St. Paul’s churchyard, to the gardens of the WTC Memorial and Battery Park along the Hudson River.

The arched, elliptical structure - the Oculus - is approximately 350’ long, 115’ across at its widest point and rises to a height 96’ above grade at its apex. The structural steel ribs that form the Oculus extend upward, like outspread wings, to form a pair of canopies that rise to a maximum height of 168’ above grade.

Access into the Oculus is provided through two entrances located at the east and west nodes of the building’s central axis at Church and Greenwich Streets respectively. The entrances open onto symmetrical stair landings with cylindrical glass elevators. From this level, visitors descend approximately 22’ to the Upper Concourse level where the elliptical interior space opens to its full dimensions (approx. 400’ x 216’), and where visitors have access to the MTA 1, R and E subway lines, Towers 2, 3 and 4, as well as retail galleries.

From the Upper Concourse, visitors descend another 20’ via escalators, elevators and stairs to the Concourse level. This level is the main retail level in the Hub and offers pedestrian connections to the Fulton Street Transit Center to the east, the PATH Hall and Brookfield Place to the west, and Liberty Street to the south. From the Concourse level – 160’ below the apex of the 330’ long Oculus operable skylight - visitors will be able to look up at a column-free, clear span. Although suggestive of motifs from many traditions (the Byzantine mandorla, the wings of cherubim above the Ark of the Covenant, the sheltering wings on Egyptian canopic urns), the form may be summed up, according to Calatrava, by the image of a bird released from a child’s hands.

The MTA 1 Line bisects the site below Greenwich Street. West of the 1 Line and 8’ below the Concourse level, visitors arrive at the Mezzanine level, which is dominated by the 65,000 sf PATH Hall. The 290’ long vaulted steel ribs span 35’ above the floor supporting the WTC Memorial gardens above. Along the northern edge of the Mezzanine level, below Fulton Street, the 325’ long West Street Concourse connects the Hub to Brookfield Place. The vaulted ribs along the concourse rise 30’ above the stone floor and are an extension of the PATH Hall structure. Passengers moving through the PATH Hall descend 15’ to the four 550’ PATH platforms below. The platforms still enjoy natural light transmitted from above through generous floor openings in the Mezzanine.

The project’s sculptural form is achieved through the modulated repetition of structural steel ribs which unify the complex composition, and provides dignity and beauty to the building’s sub-grade levels and pedestrian walkways. Between the ribs, glass allows natural light, a powerful symbol of hope and vitality, to flood the facility. Calatrava speaks of light as a structural element in the Hub, saying that the building is supported by “columns of light.” At night, the illuminated Oculus serves as a lantern in the reconstructed WTC site. On September 11th of each year, as well as on temperate spring and summer days, the Oculus’s operable skylight opens to bring a slice of the New York sky into the building, reminiscent of the Pantheon in Rome. 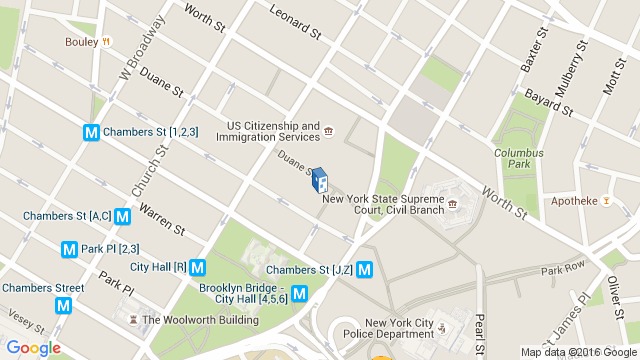 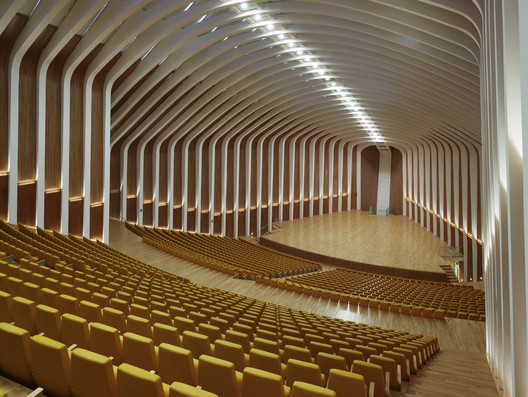 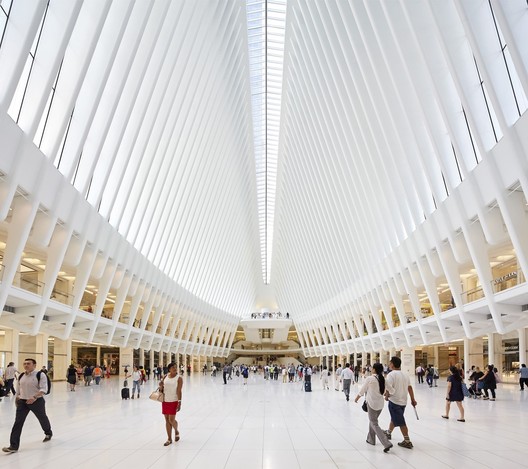