BIG has revealed their concept for the Redskins new stadium complex. Complete with a moat, the semi-transparent, undulating structure was designed to redefine the American stadium. Rather than being (mostly) preserved for game-day, BIG envisions the stadium to be a year-round destination used for more than just football.

“The stadium is designed as much for the tailgating, like the pre-game, as for the game itself,” Bjarke Ingels said on 60 Minutes. “Tailgating literally becomes a picnic in a park. It can actually make the stadium a more lively destination throughout the year without ruining the turf for the football game.”

“Does the typical NFL stadium have room for improvement?” Ingels told The Washington Post. “Yes most certainly. Is it waste of resources to have giant facilities that are only active 10 times a year... Also we have sought to distill the stadium experience — before, during and after the game — to its essential ingredients — to provide the greatest intimacy for the players and fans, and in doing so to create a more compact and efficient stadium as opposed to the colossal facilities of the past.”

The team's owner, Daniel Snyder has yet to select the stadiums new home. The Redskins currently play at the 80,000-seat FedEx Field in Maryland. It is said that they are considering moving back to Washington DC or relocating to Virginia. 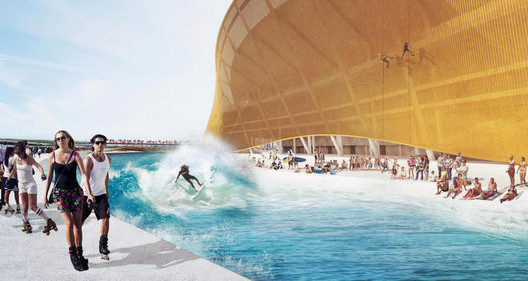