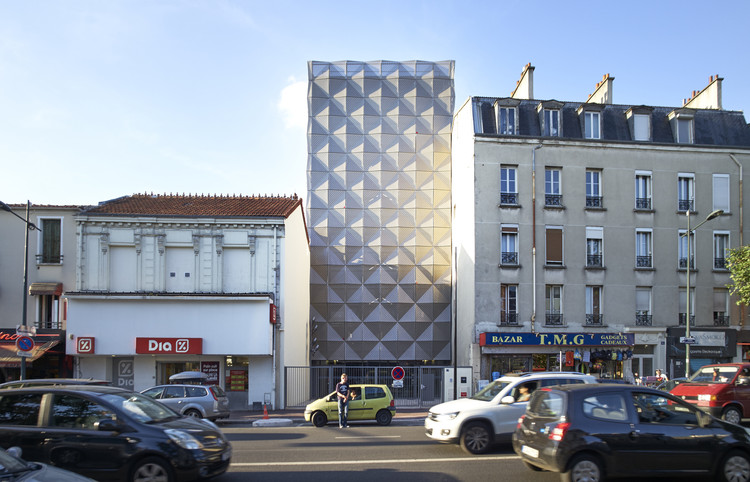 Text description provided by the architects. From cultural requalification to urban identification

Implanted in the district of lower Joinville on the avenue of General Gallieni, the municipal School of dance in Joinville-le-Pont is a response to the cultural approach of the town.

The Avenue du General Gallieni as a future Metropolitan Avenue is a busy main road; its traffic is intense, noisy, but the vibrant living environment brings a growing centrality on this thoroughfare. The dance school is implanted in a heterogeneous streetscape, ranging from more or less recent apartment blocks and well preserved pavilions.

Set back from the boundary of the land plot, the project breaks the street frontage built along the avenue to extend the public space and to reach a courtyard. This justifies the access to the amenities, marking a break in the continuous chain of shops at ground floor.

The narrow and deep site is wedged between a 4-storey apartment building in the east and a small supermarket in the west. This geometry influences the insertion of a simple volume, necessarily detached, the aim of which was to free as much space as possible to accommodate large and generous dance studios.

The structure consists of lateral concrete walls placed on the parcel boundaries which carry wide open floorplates, naturally lit and with an uninterrupted view over the horizon.

By strictly dividing the program between circulation on the avenue side, and the functional spaces and the garden areas on the interior, the school on the one hand optimizes the flow and circulation and on the other hand the solar orientations.

Minimalist interiors and raw materials such as varnished concrete, metal, contrasts with the precision of the outer shell of the building. Consisting of a perforated metal veil forming a regular diamond pattern, the envelope is designed as delicate lace, a goldsmith's work; it functions as a filter, rather like a moucharabieh that filters light without altering views.

The Dance School is significant by its difference with its mineral context and suburban buildings.

It is inserted as an unusual object, capable of arousing perplexity and curiosity of the passersby. Its design is closer to urban design, so that its simple form looks like a monumental minimalist sculpture. The identity of the building brings curiosity. 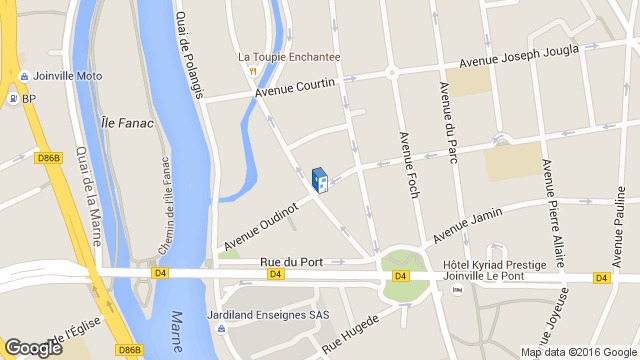