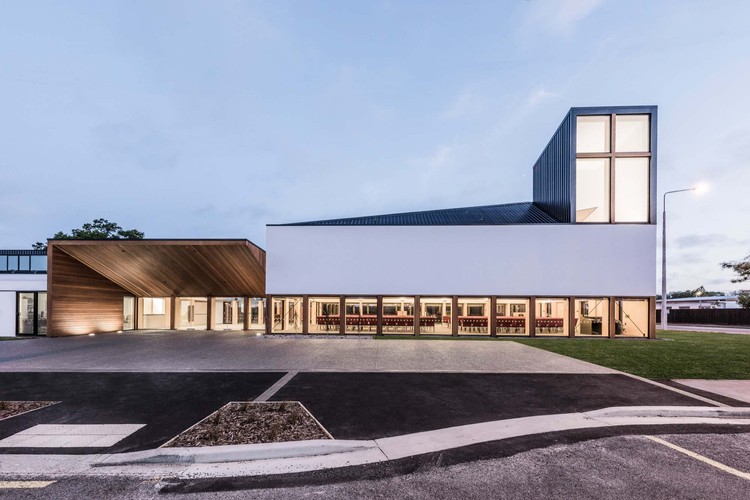 The Christchurch North Methodist Church has existed on this site for at least 100 years. However, due to damage sustained in the September 2010 and February 2011 Canterbury earthquakes, the church complex has been demolished, leaving a cleared site.

The limited construction budget has been the primary factor in targeting a minimalistic approach in the design. The intentional restriction of use of details and materials helped to achieve a stronger expression of architecture without exceeding costs. The clearly defined form enhances the contemplative atmosphere of the space, emphasising its predominant function.

The key landmarks of the site have direct impact on how the building is organized. The south side, being most exposed to public view naturally plays an iconic, expressive role. From the west, the building faces the community side. In this area, it is open, transparent and inviting, encouraging all to come closer and feel welcomed inside. The east side creates opportunity for the location of a silent, contemplative backyard with a tranquil garden. It enhances the atmosphere of a worship space and helps to maximise the visibility of the entrance.

The layout of the Ground Floor is organized around the central entry / foyer area, creating a transparent link to the backyard garden as well as a connection between the Worship Hall and the Community Block. It is designed as an open, inviting space that could be used as an entry, spill-out space and as a separate area for meetings and functions.

The Worship Hall has a rectangular shape with a central orientated layout with moveable seating and a platform that can be reoriented, allowing flexibility of use. From the south the Worship Hall is screened from the noise of busy street by a wall with smaller opening spaces. From other sides, the space is surrounded by 2m high windows positioned between regular columns. Limited height and depth of the openings prevents excessive sunlight in the interior.

The north community block connects the foyer with the parking area through an open gallery - corridor. Being adequately wide and lit through continuous skylights this link becomes not only a comfortable circulation area but a significant element of the building, and could be used for exhibitions and as an interaction space for the community. The meeting and lounge rooms take full advantage of the western light and can be opened to the fenced outside area while the kitchen, sports hall and storage are orientated towards the less attractive east side.

The form of the building is created through identification of basic forms established in the tradition of church architecture and of the place. Those forms are then revealed and their content is opened as an invitation and interaction with the outside environment.

The clearly identified corner tower of the Worship Hall expresses its predominant function of worship space, and gives a nod to the corner spire of the previous church. It restores a community landmark to the street corner. The entrance is distinguished from the rest of the building. Highly visible and strong in its expression, it invites the user into the transparent foyer that opens into to the backyard garden, allowing and encouraging its active use. 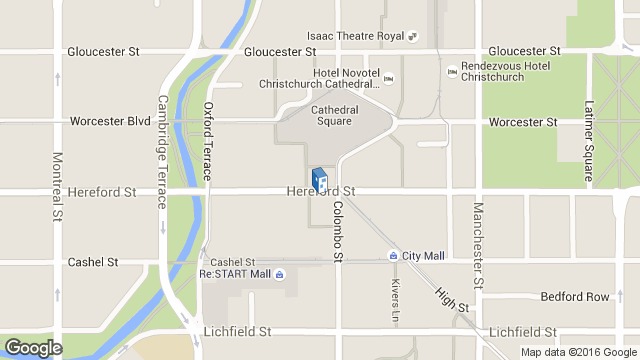