Carlo Ratti Associati has teamed up with German engineer Schlaich Bergermann Partner and British design studio Atmos to design the world's tallest man-made structure. Nearly twice the height of the Burj Khalifa, the 1609-meter-tall tower was envisioned as a vertical "Central Park" clothed in vegetation and supported by a lightweight matrix of pre-stressed cables.

"The Mile," as its named, is a "real project" says Ratti. Though its client is remaining unanimous, Ratti ensures that they are in discussion with a number of cities to scout a potential site.

If built, visitors would ascend via a series of dual purpose "sculptural capsules" orbiting the tower's 20-meter-wide shaft; beyond transporting visitors to and from the tower's mile-high viewing deck, "sky walkway," park and restaurant, the capsules can be used for a number of programs, from hosting meetings and concerts, to being a haven for private pools.

"The structural concept for The Mile is technically feasible because of its consequent and uncompromised lightweight approach," said Schlaich Bergermann Partner associate Boris Reyher. "The architectural form and the spatial equilibrium of forces become one and the same thing... On the one hand, this leads to an optimized usage of high-grade materials. On the other hand, the structural form and load paths become intuitively comprehensible by every spectator." 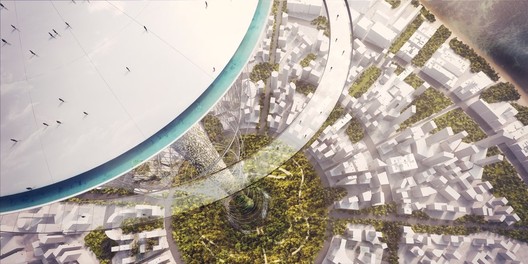