Save
CLT and the Future of Wood: The Timber Revolution Comes to Industrial Architecture
Share
Or
Copy

For the past several years, there’s been increasing talk of a renaissance in timber construction. Although we are predisposed to thinking of wood as a component limited to the classic balloon-frame house, new technologies have generated alternative materials which look like and are created from wood, but are stronger and more versatile than their more traditional cousins. While there are a number of different products on the market, including Glulam and Laminated Veneer Lumber (LVL), the material that seems to hold the most promise for changing construction is Cross Laminated Timber (CLT).

The engineered material is created by stacking and gluing smaller pieces of structural lumber, each layer perpendicular to the one below it, to create wooden panels with a number of advantages to other commercial construction materials. According to Reinhard Sauter, owner of Sauter Timber, “CLT has excellent seismic values, it is extremely durable, competitive in price to steel and concrete, lighter and thinner than the latter, and with reduced construction times” - all of which made it an obvious material candidate for the company’s award-winning construction facility in Rockwood, Tennessee, completed in 2014. The structure, which was built with a Glulam frame and CLT wall and roof panels, offers an insight into how these materials can be effectively utilized in future commercial and industrial structures. 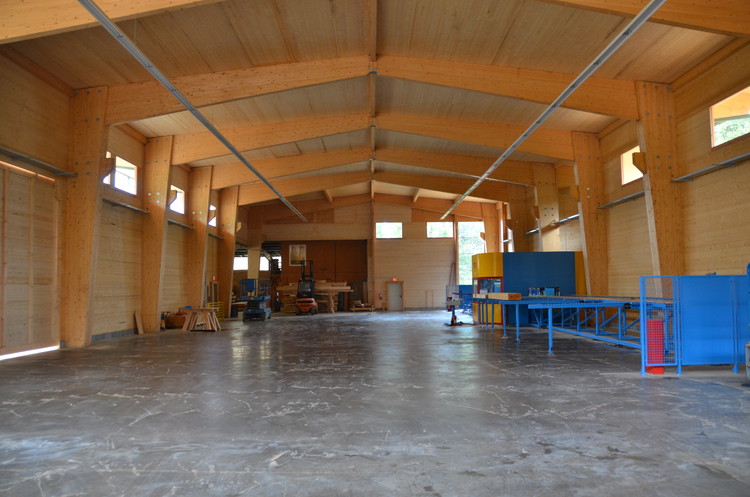 Timber began its material resurgence in Europe the 1990s, but it has only caught on in the United States in the last decade. One of the reasons “engineered timber” products are so much stronger than conventional wood is that reassembling smaller pieces reduces natural variability. Thus, the benefits and ease of production of such materials has mirrored a rise in computer-aided manufacturing, which has allowed for wood and other construction products to be milled with ultra-precision using computer-numeric-control (CNC).

Prefabrication is where companies like Sauter Timber have excelled. Beginning in 2002 with fully automated CNC heavy timber fabrication for log and timber frame companies, Reinhard Sauter affirmed that he could have never anticipated the change in reception to timber construction. “Little did we realize that our actions then would fuel a ‘precut revolution,’” he said, “as more and more companies continued to find the cost and labor efficiencies from outsourcing their precision cutting and joinery to specialists like us.”

In the United States there are existing standards for CLT and “panels typically consist of three, five or seven layers of dimensional lumber oriented at right angles and then glued to form structural panels,” says Sauter. Because wood is strongest in a vertical orientation, the stacked panels of CLT give it maximum strength in both directions. Most panels are between 8 to 10 feet (2.4 to 3 meters) wide, although some are 4 feet (1.2 meters), and they generally come in lengths of around 40 feet (12 meters). The 4-foot panels have the convenience of easy transit on flatbeds and can be moved with a standard forklift on a job site.

In 2013, as business expanded, Sauter Timber decided that their new production facility should be constructed with the same products that had fueled its necessity. In Robert Venturi, Denise Scott Brown, and Steven Izenour famously aligned buildings into two categories: the duck, a building that is a symbol for what takes place inside it, and the decorated shade, a building that relies on signage to convey its purpose. In this schema, Sauter Timber’s new building is a bit of hybrid; a building that advertises its business, but is also conventional and shed-like. As Sauter stated himself, “we were determined to build something better and different than the common steel and metal buildings typically used for industrial production facilities, and wanted to showcase the advantages and versatility that cross-laminated timber (CLT) offers in the process.” Using CLT was also slightly cheaper than constructing a steel building of similar size.

Besides being more versatile CLT is also more ecological than concrete or steel. “Because it can be made from smaller timber,” says Sauter, “it requires virtually no cutting on the actual job site,” which makes it less wasteful. The material is also less prone to fire and water damage than traditional wood. As timber has a natural capacity for carbon retention, an increase in its use also holds promise for climate change. Promoting such characteristics, Sauter sees a robust future for CLT construction in the United States. “CLT is the perfect structural solution for all types of smaller commercial and industrial projects into the future. Not only is it quick and easy to assemble, but it’s also good for the environment with its reduced carbon footprint and energy savings potential.”

Asked about specific future applications of CLT, Sauter believes that there’s still a big learning curve for wood on a large scale, but that increased public and industry awareness will help to advance future projects. At this point, “the biggest markets for CLT and Glulam in the near future are commercial buildings like hotels, motels and office spaces.” While at one point it may have only been feasible to build wooden structures up to four stories, there are now proposals for 12, 18, and even 22 floor constructions. According to Sauter, future applications of wood could work with steel and concrete, further expanding the possibilities of engineered wood. Although he believes the material is still too expensive to replace stick-frame construction methods for individual homes, Sauter surmises that increasing costs for disaster preparedness measures (like hurricane anchors and tie-downs) could one day make CLT and other engineered wood products an alternative standard for residential construction.