British firm PLP has unveiled their design for a large complex at the heart of the Pearl River Delta in China. The master plan comprises four buildings: the Platform for Contemporary Arts, the Lizhi Park Tower, the Concourse, and the Nexus - a 600-meter tall office and hotel tower that will be the masterplan's centerpiece and the region's tallest skyscraper. 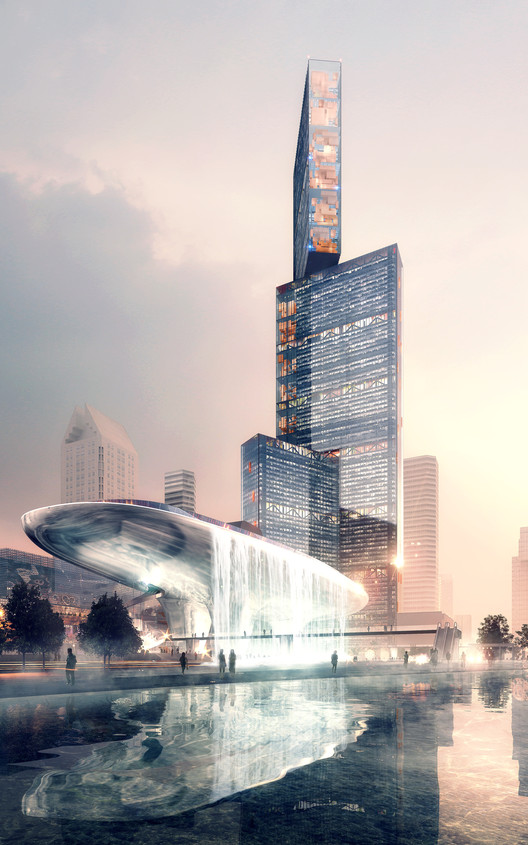 Avoiding the lateral loads and lifting requirements typical of bar or slab configurations, the Nexus Building's mass is redeveloped into several smaller volumes organized into families, similar to a tripod or outrigger. The resulting configurations all encourage natural lighting and cooling, flexibility and connections to the environment to create a pleasant work environment. As the tower moves up in height, it responds to different surroundings; in the lower third, it reacts to a nearby park; in the middle, to the urban context; and at the top, the Nexus Building is oriented toward the city and mountains.

Complementing the Nexus Building are three other structures. The Platform for Contemporary arts combines a public space with a performing arts theater. Housing 1700 seats, a music hall and a multi-purpose performance space and multiplex, the Platform is then lifted from the ground to free its footprint for public use. Water cascades from the platform to the nearby park, creating a “powerful new urban feature, an unforgettable civic spectacle.”

The Lizhi Park Tower is a 300 meter tall office tower, north of the Platform. The building is comprised of two interlocking volumes. The bottom is oriented to reveal more of the nearby towers when viewing from the park, while the upper volume cantilevers to “look” toward the middle of the site, balancing the uppermost portion of the Nexus building.

The Concourse connects all three buildings, also housing large scale retail and leisure facilities. Consisting of a main, elevated bridge that is suspended 7 meters above the street, as well as multiple off-shoot bridges, the Concourse is connected to the adjacent mall and the main road to the park.