Save
15 Incredible Architectural Feats Made in Minecraft
Share
Or
Copy

With more than 70 million copies sold worldwide, it would be unfair to refer to Minecraft as just a simple game of textured boxes in a pixelated 3D world. After acquiring the makers of the game (Mojang) in 2014, Microsoft announced on Tuesday, January 19 that it also acquired MinecraftEdu, the official educational version of Minecraft, which is used as a creative tool in more than 10,000 classrooms in 45 countries around the world.

The infinite possibilities that the game offers have led millions of people around the world to make and share their greatest creations: cities, buildings and even the reinterpretation of historical structures. Minecraft's impact was recognized in 2015 when the Centre Pompidou dedicated an exhibition to its creative potential for children and adolescents.

We've rounded up 15 of the best models created on the platform. And if you use Minecraft, you can download most of them (via an external link provided by the creator) to add to your own account.

The most ambitious project in the world of Minecraft is Project 1845, a recreation of Beijing in 1751 during the Qing dynasty of the Chinese Empire. The project has already completed its fourth year of development, and among its features is the recreation of the Forbidden City and the city of Beijing (1750), the tombs of the Ming Dynasty (1368-1641), the Summer Palace (1911 ) and the old Summer Palace (1760-1901).

The project is already available on MinecraftEDU to teach history, language and geography, according to its creators. They also seek to help restore the original rare map so that "more people can enjoy this unique piece of history which has been hidden from the public for centuries."

After making a replica of the Eiffel Tower in Minecraft (2012), LanguageCraft continued to improve and rebuild the model of the tallest structure in France to the point of recreating the Champ de Mars, the public gardens surrounding the French landmark in the seventh district of Paris. In short, an amazing job that doesn't miss a single detail, including cars, helicopters, public lighting and (pixelated) people.

User C_B_John set out to create New York in 1936, three years before the outbreak of World War II. This project is meant to recall "the last decades on earth when architects preferred visual arts (with a light influence of modernism, e.g. Art Déco) to design their buildings," explains the creator.

With 5% of the project complete, it already offers views of Lower Manhattan in the early 30s, with more than 400 buildings, as well as churches, interiors and lobbies.

As part of a recent exhibition at the Museum of Contemporary Art in Antwerp (Belgium), LanguageCraft recreated the city's central railways station, which was built in 1905, in Minecraft. Check out this timeline from the exhibition to learn more.

Hydros, City of the Future

Now we move from reproductions to visions of the future, as in the case of the LanguageCraft team who created Hydros, a project that took a full year to develop. Beyond just "a vision of the future," Hyrdos seems to be a utopia strongly inspired by a lush nature, where eclectic installations are erected in heights that vaguely resemble the architecture found along Southeast Asian waterways.

Future City 3.1 is a project by user Zeemo, who based his model in the year 2161. According to the creator, everything starts with the construction of a memorial dedicated to a hypothetical war between a society divided between "Exiles" and "Natives" after an alarming shortage of resources on the planet.

Since Minecraft doesn't restrict the amount of time or resources utilized by its users, ambitious constructions like Imperial City often appear. It is "a large, monumental city that is built in all styles from the 19th century and early 20th century (neo-classical, beaux arts style, modern style...)," says user Rigolo, the creator of this model.

"All buildings are original, even though they are often based on existing buildings that we modify or merge as a source of inspiration," he says.

You can download all the buildings or add to the Imperial City on your own server, provided that you give any credit to other creators where it's due (obviously). According to its creators, the project is 70% complete.

Created by user jamdelaney1 in three months, Adamantis is a "an enormous fantasy city built upon high cliffs from which natural springs and rivers flow, carried to the city by a network of aqueducts". However, it's the discussions that sometimes take place in the comment sections of this project that called our attention.

In response to someone who was disappointed when they downloaded the world and found out that it wasn't built as an inhabitable city, the creator said: "Adamantis would never be a practical city - it lacks infrastructure, basic housing and an enormous amount of other things required by a conventional city. I am aware of this, but Adamantis was not built to (function) - it was built *entirely* from an aesthetic perspective."

While Adamantis was criticized for lacking the sufficient infrastructure to be a functioning city, Modern City recreates a generic city with all the equipment that the creator, MC_Nightmare believes necessary: train station, casino, cultural center, hotels, offices, bars, parks, housing, the parliament building, bridges, ponds, boats, aquariums, entertainment area, historic landmarks, beaches, restaurants and cars. It raises an interesting question: If you had to design a city from scratch, what would you choose to include?

Now let's talk about the models inspired by fictional worlds. Let's move on to Westeros, the fictional world of A Song of Ice and Fire, the series of books that the TV series Game of Thrones is based on. A team of fans (WesterosCraft) created King's Landing, an amazing map created by 100 people selected via an application process (yes, people had to submit applications). They worked for more than four months recreating the reign of Aegon I Targaryen, conqueror of the Seven Kingdoms and founder of the Targaryen dynasty in the saga created by George RR Martin.

Tatsuyama, Empire of the Dragon Mountain

User Wooraah's project is an island in the fictional Dragon Mountain Empire, with an area of 1,440,000 square cubes and including 20 main buildings, 70 structures and various secret areas. It took 350 hours to create this Asian feudal city, inspired by Japanese, Chinese and Thai architecture, according to the creator. Wooraah' enjoyed the process and also learned a great deal "from map design, reptile anatomy, Asian culture, history and architecture, Video and Photo editing, plus (I) had a lot of fun, despite suffering from some writers block at various stages," the user explains.

The mythical island of Atlantis, described in the notes of Plato, has been a source of inspiration for hundreds of expeditions, theories, and recreations of this legendary civilization. In the world of Minecraft, Team NewHeaven built its own version of the Greek myth in three months.

Inspired by the Prince of Persia game series, user Anarrih created Alamut, the hometown of one of the main characters from the film adaptation in 2010. According to Anarrih, the project took a couple of months, working between 30 minutes and two and a half hours every day.

When it comes obsessions, Halion is a good example. This creation is the result of 1,000 hours of work by the Gazamo team: 196 buildings (including interiors), 10 wooden boats, two airships and "an un-numbered amount of hidden secrets" make up the island which, as described by a Gazamo official, is a site for workers engaged in the creation of metal tools and textiles.

We will close this selection by sharing the quintessential Minecraft structure: the castle. At the time of publishing this article, Planet Minecraft had 13,374 models of castles in all their forms, confirming the game's incredible impact. Beyond these impressive models, there is a greater potential here. "We hope that people will look back on MinecraftEdu as a kind of laboratory that explored the possibilities of new kinds of learning," the creators of MinecraftEdu explain.

A laboratory whose success lies in having rules that are as simple as they are clear. 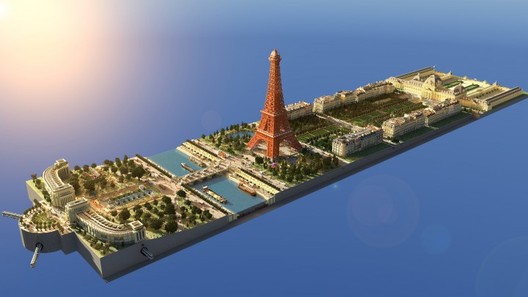