The announcement of the Pritzker Prize is often the biggest news story of the year in architecture. This year it seems will be no different: the accolade went to Alejandro Aravena, with the jury paying particular attention to his social housing work, and with the Aravena-directed Venice Biennale right around the corner, it seems that this year we'll be talking a lot about the 48-year-old Chilean.

That discussion has already begun in our comments section, where readers debated the pros and cons of the decision by the Pritzker Jury. Read on to find out what our readers had to say about Aravena and the other big stories of recent weeks.

The decision by the Pritzker Prize to award Alejandro Aravena was seen by many as the Pritzker’s clearest endorsement yet of the current trend of socially-aware architecture. The award generally went down pretty well with many of ArchDaily’s readers:

It's time for an Architecture that goes against the culture of "non-crisis". Congratulations Alejandro Aravena. Well-deserved. - Daniel Carrapa

Skimmed the comments, apparently some folks think the Pritzker should be a ‘lifetime achievement’ award. But hey, 48 isn't super young even by our industry’s standards, and he has had a profound impact in that amount of time. Including some badass Architecture in addition to his massive amount of social work. - Chris

Of course, not everyone was in agreement with the award:

In receiving the Pritzker this man denied so many other talented, creative thinkers this important award. What kind of message does it send to students that the best architecture can do is ‘synthesize existing conditions’? What in God's name does that even mean? What about inventing new conditions never thought possible? What does it say if the best architect bends over backwards to first and foremost solve issues about poverty? sustainability? Should those pragmatic issues really be our focus? What about beauty? What about space? - ben

But after reading ben’s comment, many of our readers felt the need to come to the defense of the Pritzker Jury’s decision:

Your insistence that the pursuit of beauty be segregated from any engagement with social issues to me is at the very least ignorant of what it is an architect does, or what the profession of architecture can be. The job of an architect is not to sit in an ivory tower and conceptualize abstract form, it is to provide shelter and pursue aesthetics within physical, social and/or technological contexts. Art cannot have a function. - HeywoodFloyd

One reader even put the award in a historical context to argue that the Pritzker’s new direction is not a new trend at all, but a return to the principles that guided architecture for much of the past century:

The greatest ‘creative thinking’ movement of the 19th and 20th centuries was packaged primarily in the ‘social’ project of urban Modernism. It was through engagement with actual conditions (or the denial of them, etc) that new notions of space were developed. We got to watch capitalism take over the functional and aesthetic aspects of the movement, and change the way the world looked. Wow. All from concern with the masses and mass production. I'm not being nostalgic or reverent, but it was only after that was all abandoned in the 1970s that everyone starts complaining that ‘meaning is dead’ and ‘architecture has lost its capacity for representation.’ - Captain Zero

Our republished article from The Architect’s Guide on why working abroad can actually be a hindrance to your career ruffled a lot of feathers. While it’s worth remembering Craig Robertson’s comment on Facebook that “He's not saying ‘don't work abroad’ but ‘be aware of the potentially unforeseen consequences,’” many people still responded by pointing out that Brandon Hubbard’s 7 points may not be universally applicable:

[This article is] applicable only if you belong to a first world country. But for us rest of the world, global competence is the key if one wants to be a successful. Yes, even in Architecture, there is also politics. Coming from a 3rd world country, working abroad is a great advantage. Getting enough experience trying to cover all the bases (consultancy path or design path or construction path or all). We need to be better than the average Joe to be in the loop, or suffer by witnessing our (first world) apprentice becoming our own boss in the future. - Carmen Tator

Others, whether they agreed with the author or not, were keen to share advice about working abroad - from how to get the opportunity in the first place to how to ensure you make a successful return one day:

I think he makes a lot of fair points and I have reached the point in my career where I know a lot of people who went abroad after school and are now trying to come back. They are running into a lot of the issues he talks about potential firms not counting their years of experience either at all or fully because of it being abroad. It also depends on what country you work in - the UK to USA is a much easier transition than China to USA - so it's all relative. That said, I think an alternate option to working abroad is to work for a large firm and make it known that you are interested in working on international projects (not everyone is). I spent about 6 months in China, all expenses paid working on a very interesting projects and was able to travel quite a bit around the region. It almost turned into 2 years. I have also been fortunate enough to travel to other countries for various projects/proposals that were all rewarding experiences. Also know others who have had very similar experiences working all over the world this way. - Scott Smith

Scott Smith’s is just one comment of many that gave valuable advice about working abroad, so if you’re truly considering a big move, I recommend that you check out everything our readers had to say here.

The news that Maya Lin, of Vietnam Veteran’s Memorial fame, is designing an “urban mansion” in New York attracted criticism from many readers. Some took issue with the project’s brief:

Good that a mixed use building is being replaced with 20,000 square foot private mansion. Would be a real gain for the neighborhood. How often do these people need to use the restroom to warrant 11 of them? Will the 5,000 square foot gym be accepting members? - bed stuy

While others focused on the external appearance of the design:

In addition to the fairly lame schematic design, all that glass looks commercial which will make it twice as easy for Landmarks Preservation Commission to reject. - HeywoodFloyd

And others focused more on the project’s relationship with its context:

My impression of Maya Lin is that she's otherwise quite talented, but unfortunately this project feels like it was designed without first having a site in mind, or even a sense of scale. - Alan

With so many angles for criticism, is it a good thing that, as pointed out by HeywoodFloyd, the project seems destined for rejection?

Keep the debate flowing! Please post any responses to these topics in the comments below. 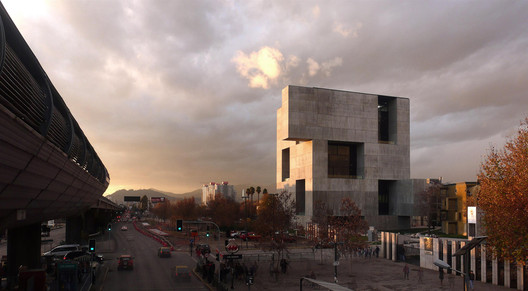