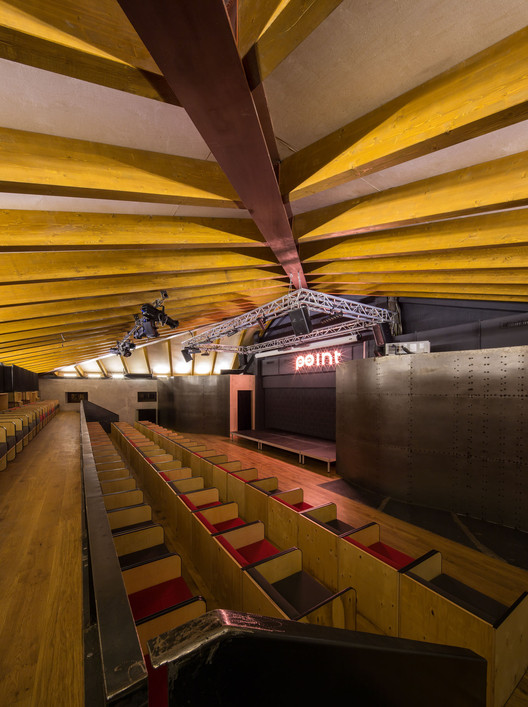 This independent theater positions itself on a site with great personality, defining it, awakening memories. By doing so,  it helps reviving that specific urban area.

The 19th century house that now hosts the POINT project was consolidated, restored, extended and mansard roofed. Therefore, the house comprises of a basement, a groundfloor and a mansard roof. Additionally, the property holds a long and narrow yard that develops along two sides of the building.

The start-up for this project was the pixel (POINT) concept. We used the pixel as a unit of measurement (module), thus generating a series of modular and multifunctional objects that helped obtain flexibility. These ended up enveloping and visually unifying the whole space, whilst separating and outlining certain areas.

The ground floor has the function of a foyer and is also able to host cultural events all by itself. The basement works as a bar/club  and sometimes as a performance room for some unconventional plays. The actual theater hall is contained in the mansard roof and is a modern interpretation of a hall, stressing on flexibility. The theater hall also benefits from having a covered terrace. The long and narrow yard defines itself as an extension of the foyer, especially during the warm seasons. The yard embraces the house on two sides, togheter with the ivy canopy and the branches of the trees planted along the fencing bench for protection.

The POINT Bookcase is modular and made of steel bars and randomly placed birch plywood boxes that look like pixels. It is not your traditional bookcase for, besides books, it holds plants and even bottles and glasses. Besides the storage and display purpose, the POINT bookcases work as semiopaque partition walls for an efficient zonation. The bookcases are working their way up, shifting their vertical axis with a horizontal one and unfolding on the ceiling’s surface. This way, they become visual filters for the cables and ventilation shafts and the plywood boxes are used to incorporate lights and speakers.

The POINT Armchair, a birch plywood and foam cushions armchair, is mainly used as a theater seat. It can be transformed with a simple flip, into a coffee table or even a nightstand. The groundfloor bar shows a POINT logo on it’s front. It is cut from a raw rusty steel plate, creating a visual effect similar to drops of mercury that clump towards the center.

In the theater hall, the staircase and the backstage (actors cabin) were embedded in two curved corrugated steel sheets, framing the stage. The existing finishings of the inside space were kept. This is how concrete cladding resulted as background for the basement and the groundfloor. The structure of the new mansard roof was exposed, closing the space between the beams and rafters with plywood pannels.

Because of it’s high visibility from the urban space, the blind wall of the XIX’th century house was painted by contemporary artists (Sweet Damage Crew).

The paradox inside the POINT project is that unity is achieved by fragmentation (pixelation). The crude finishings, structures and installations, the 3D accentuated perception of space and volumes, balanced by vegetation, curved lines (details of the XIX’th century), semi-opaque filters, the way lights and shadows are shed on the walls and the urban feel, gather up inside a nonconventional theater project. 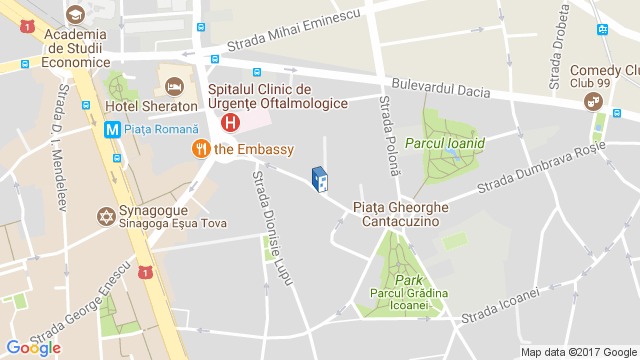