Save
Playing the Housing Game for Profit: the British Volume Housebuilding Project
Share
Or
Copy

In his essay "Figures, Doors and Passages", the architectural historian Robin Evans described how "it is difficult to see in the conventional layout of a contemporary house anything but the crystallization of cold reason. Because of this," he asserted, "we are easily led into thinking that a commodity so transparently unexceptional must have been wrought directly from the stuff of basic human needs." His words, which highlight the passive approach of designers, developers and dwellers when it comes to the vast majority of British housing being built today, were first published in 1978 – two years before the Conservative government under Margaret Thatcher introduced the 1980 Housing Act.

This legislation gave council house tenants the legal 'Right to Buy' the homes in which they lived and rented, offering those who had lived in their home for up to three years a 33% discount on its market value. By 1995, the majority of the UK's social housing stock were in private hands and Britain—for the first time in more than a century—became a nation of homeowners. As wealthy landlords took advantage of property-going-cheap, house values soared. Homes worth around £50,000 ($75,000) in the early-1990s were being sold for £250,000 ($370,000) in 2013 as local authorities slowed their affordable housing ambitions in favour of large-scale private development companies.

The side-effects of the decision to privatise the British social housing market (which was relaunched in 2015) rippled across the millennium and now, thirty six years later, exhibits itself as instrumental in aiding the transformation of vast tracts of England into a comparatively unaffordable, developer-controlled landscape of poor quality volume housing. As a response to new "complex and onerous" rules introduced by the British government in October 2015, which will allow local authorities to voluntarily (the UK does not have formal regulation in place to require a minimum size in house building) implement space standards in their districts, the Royal Institute of British Architects (RIBA) have attempted to make clear the stark contrast between British and European housing standards.

The RIBA's report found that the government's attempt to encourage authorities to suggest minimum space standards is a swampy morass of administration and bureaucracy, not to mention a loophole which means that they do not apply to all new homes. Overall, it found that a lack of a blanket standard is in fact "depriving thousands of families of the space needed to live comfortably and cohesively, to eat and socialise together, to accommodate a growing family or ageing relatives, or even to store possessions." In riposte, the Home Builders Federation (HBF) released a statement arguing that the report fails to address "land supply, economic viability, inconsistent planning rules and regional variation," stating that volume house builders "can only exist if they are able to build houses customers want and can afford."

Both sides of the table offer a case worth investigating. On the one hand, it's true that the lion's share of home building in Britain has become little more than a game of strategy between CEOs, planners, and property owners. Land banks—a vast stack of empty plots which housebuilders have in their kitties—are, according to a recent Guardian estimate, burgeoning at over 600,000 among the nine largest. Of these 600,000 just 66,881 were actually built on and sold to consumers during the last financial year.

The report, based on information disclosed in the companies’ last financial results, the four biggest developers in the industry (Berkeley, Barratt, Persimmon and Taylor Wimpey – all FTSE 100 companies) also states that together they are sitting on a staggering £947million ($1.4billion) of profit-driven capital. Of the aforementioned 600,000 empty plots, the four FTSE 100s control more than 450,000 – a share of the market verging on obscene.

Nevertheless, volume house builders must be doing something right. In the HBF's response to the RIBA's report, Stewart Baseley declared that, in spite of constraints, "developers are building the homes that [the UK] desperately needs, and providing billions of pounds of investment in infrastructure and the environment." The dwelling, in the oracular words of Robin Evans, has become commodified; they—the Volume Housebuilders—are simply taking their cut of the profit. In short, house building in Britain has arguably become leaner and more efficient than it might have been should the 1980 Housing Act have not been passed.

In 2015 myself, Hikaru Nissanke and Jon Lopez (of OMMX)—each a child of British suburbia—began an ongoing conversation with Daniel Miller (UCL), Victor Buchli (UCL), Dick van Gameren (TU Delft), Mark Pimlott (TU Delft), Hugo Hinsley (AA), and Irénée Scalbert (AA) about (what we have termed as) the 'Volume Housebuilding Project' (VHP). The following edited extract is from an essay originally published in Volume #46 (Shelter) examining how, in the post-Thatcherite world of home ownership, the VHP phenomenon has reflected societal shifts in Britain through the device of the domestic home and why, amid their responsive and immediate ecosystem of housing development, there is value to be found and a model to be celebrated.

A Piece of England to Call One’s Own

Relative to the city, suburbia is very recent condition. The traditional ‘deal’ offered by suburbia—which was originally catalyzed by the railways following the Industrial Revolution and encapsulated by John Betjeman’s 1973 film Metro-Land—was one of compromise. It catered for people’s desire to escape the squalor and labor unrest of the inner-city’s industrialized and polluted core in favor of an image of the ‘idyllic country enclave’ and, in particular, the freedom and independence that it afforded. It was the construct of suburbia that first created the British middle-class, governing and governed by their lifestyle, aspirations, routines and rituals. This ‘best of both worlds’ framework for suburban dwelling persists today, having evolved since into a highly successful, heterogeneous landscape of cultures and cultural contributions. It is home to four-fifths of the British population.

That said, a housing problem in the UK has, in recent years, tipped into a housing crisis. The traditional ‘deal’ (of dwelling in suburbia and working in the inner-city) and its corresponding social contract is unraveling. It’s becoming increasingly out of reach of the conventional middle-class, and the dialogue between city and suburb has developed into a dialogue between city, suburb and outer suburb. A comprehensive lack of affordable housing has increased the demand of proximate suburbs and removed the choice from a vast demographic who are now compelled to migrate further out from the inner-city in their search for 'idyll'. This, in turn, has created a fresh housing demand, which the Volume Housebuilding Project has absorbed. To address this growing imbalance, a new ‘deal’ must be negotiated.

Prior to that, however, it’s necessary to understand the context – what the Volume Housebuilding Project actually is. Comprising of mass suburban housing built by large-scale developers from the 1980s to the present day, the most prolific volume housebuilders in Britain[1] have the infrastructure in place to build en masse, and quickly – though [as a recent Guardian investigation attests to] are not necessarily compelled to do so. Their business model relies on trickling new housing into the market to maintain house prices; it is not necessarily in their financial interests to build at the pace that the demand requires. In spite of their size they are able to rapidly respond to consumer feedback and observations, fine tuning their stock portfolio to shifts in living patterns almost as soon as they develop. The cumulative result, bolstered by their concentrated marketing campaigns, means that they are able to sell the smallest houses in Western Europe[2] to a large portion of British homeowners who are seeking the suburban grain of detached and semi-detached typologies, all with the latest fixtures, fittings and appliances.

The success of the Volume Housebuilding Project’s highly distilled collection of collapsed, nostalgic styles—a neo-vernacular architecture of ‘non-style’, from neoclassical plaster columns to Tudor Mock—caters to people’s desire for ‘character’. This quintessentially British inclination cannot be bracketed as postmodernism, nor can it be simply labeled as pastiche: the homeowners’ aspiration for historical reference (or ‘character’) is, in itself, an authentic pursuit – a condition which anthropological discourse, in comparison to the architectural, recognizes as entirely valid.

It is this capacity to cede authority to the home-owner, offering the chance to complete the house through their own transformative activities, which is the most under-acknowledged success of the Volume Housebuilding Project. In contrast to the architect-designed home, the Volume Housebuilding Project’s model facilitates the homeowner’s need and desire to co-author domestic space – in terms of the exterior, interior, and on the level of furniture and objects. As a commercial force, the product is empathetic, accommodating and inclusive. It offers an accessible framework within which people feel comfortable to exact their own individual aspirations.

Nevertheless the houses designed and built by Britain’s volume housebuilders, as they currently stand, are not without fault. Earlier this year, when asked about the image of new homes, the three most strongly perceived disadvantages were, among 2,200 people inter- viewed, the size of their rooms and overall spaciousness, coupled with the amount of green space and garden.[3] The RIBA’s 2012 Future Homes Commission report echoed these sentiments,[4] citing the amount of interior space, natural light, privacy (both visually and acoustically), flexibility and provision for outdoor space as ‘key issues’ in relation to the quality of new dwellings.[5] When common sense might suggest that surpassing minimum thresholds for space would be a fundamental driver for the Volume Housebuilding Project’s success, the RIBA’s 2011 Case for Space report found that the average new home in England is only 92% of the recommended minimum size.[6]

The traditionally fluid relationship between suburbia and the inner-city is rapidly becoming a privilege for the few. As the discourse surrounding the British housing crisis finds itself in a professional and political maelstrom[7] architects in particular, who have until now surrendered this domain to volume housebuilders as part of a broader professional erosion, can no longer afford to ignore, nor disparage, its widespread impact. It is rapidly defining – and will continue to demarcate – the appearance and quality of British housing.

The Volume Housebuilding Project—a petri-dish of successes and failures—is a phenomenon so ordinary that it deserves, and warrants, closer examination. We need a more honest, inclusive debate about the reality of British housing. 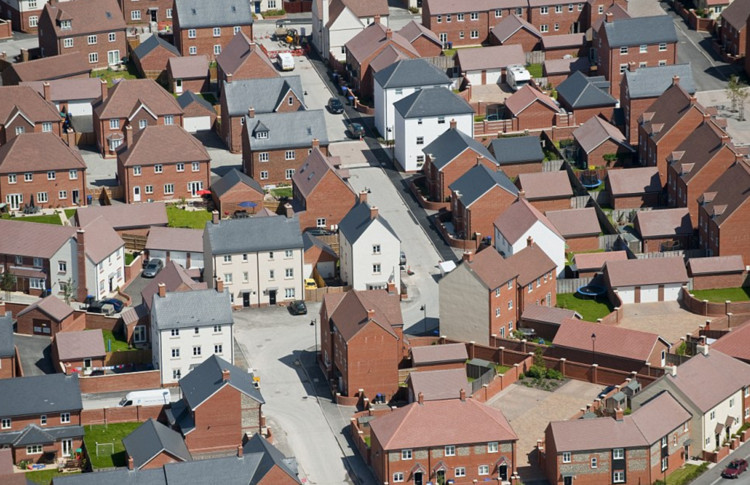 2 “Through analysis of EU Housing statistics in 2005, Policy Exchange and Locals found that new homes in the UK not only appeared to be shrinking, but were also the smallest in Western Europe. Consumers in Ireland could expect new homes to be 15% bigger, in the Netherlands they were 53% bigger and in Denmark, the average newly built home was 80% bigger than in the UK.” Rebecca Roberts-Hughes (Will Fox and Anna Scott-Marshall eds.), The Case for Space, (London: RIBA, 2011), pp. 9. (accessed October 9, 2015).

4 The RIBA’s Future Homes Commission “is independent and had no architects on it” according to Roger Graef, who was one of its commissioners. Roger Graef, ‘The British don’t want to live in new-build homes. No wonder’, The Guardian, October 2012 (accessed October 10, 2015).

5 The RIBA commissioned research on how people live today and what they want from a home. Stephen Finlay, Isabella Pereira, Ella Fryer-Smith, Anne Charlton and Rebecca Roberts-Hughes, The Way We Live Now (London: Ipsos MORI and RIBA, 2012) (accessed October 9, 2015).

7 “No politician explains the cause of the crisis. If you don’t acknowledge – or don’t know – the cause of a problem, you can’t find a solution. It’s like denying that smoking causes cancer, and handing out cough sweets instead.” Jules Lubbock, ‘Seeing Red Over the Green Belt’, Architects’ Journal, October 10, 2015 (accessed October 8, 2015).