Save
Critical Round-Up: The Most Important Buildings and Events of 2015
Share
Or
Copy

“Proof at last that OMA can make exquisitely crafted buildings when they put their mind to it – and when the budget is big enough” - Oliver Wainwright, The Guardian

Constructed in a former industrial complex, The Fondazione Prada is a permanent continuation of OMA/AMO’s runway designs for the fashion house. This time around, the buildings’ crisp austerity and cool gray tones are given life by a shimmering gold facade and network of eclectic spaces within. However, not all critics were as sympathetic to the design, with Lamster and Lange giving it their "Mitt Romney Sensitivity Award" for OMA's decision to design a private museum linked to a luxury fashion brand that is "literally plated in gold."

Lamster and Lange gave the Broad their “You Name It” Award for the multitude of nicknames it has inspired, but the museum stands out for more than its memorable facade by taking patrons on a surprising circulation path through its galleries that even includes a view into the museum vault.

Perhaps the year’s most talked-about museum, the Whitney’s new location reimagined the relationship between art and the city, and became an extension of New York’s most talked about urban infrastructure, the High Line. Unlike many contemporary museums, it is a building defined more by its context than its form.

“Whether you see it as a cluster of beehives or as a pile of dim sum baskets, the Learning Hub is a visual marvel, inside and out.” - Azure Magazine

Perhaps envisioned as a contemporary update to Paolo Soleri’s Vietri sul Mare, the Learning Hub created a warm, comfortable learning environment by giving its concrete structure a golden hue and 3-dimensional texture and by bathing the interior in light from above.

“It represents an alternative model of bottom-up development, after decades of ‘managed decline’ and failed top-down regeneration attempts, by both the council and private developers.” - Oliver Wainwright

Assemble Studio was awarded the Turner Prize for this project by changing the boundaries where architecture usually lives. Instead of employing top-down methods that determined what residents needed for them, Assemble worked at the smallest scale, empowering the community to create the products needed to renovate buildings and instead of starting from scratch, embracing what is already there.

“It’s a welcome trend to see architecture addressing both the symbolic and functional side of spaces dedicated to education.” - Julie Iovine, The Wall Street Journal

The dynamic composition of this university complex creates a buffer between city and classroom without becoming a standoffish fortress. The site sits on a modest-sized lot, but features plenty of public space. Staircases are pushed to the outside of the facade, and a 6-story glass curtain wall highlights the life within the structure, even from the street.

“Chicago had a biennial without starchitects, and the world continued to spin on its axis.” - Lamster and Lange

Chicago’s first Biennial was an open question to the architecture world: what is important to you? Responses ranged from affordable housing to construction technology to urban interventions to stacks of potato chips, but all seemed to say “we can make the world a better place.”

Architecture lost two great figures this year in Frei Otto and Michael Graves. Most famous for his tensile structures employed at the Munich Olympic Stadium, Otto was informed that he had won the Pritzker Prize shortly before his passing and the prize’s public announcement. Graves’ influential career was highlighted by his embrace of postmodernism and forays into industrial design for the everyday consumer. Both were recognized in Lamster and Lange's "Farewells" section, which described Otto's Pritzker Prize as "long-deserved, well-deserved," and Graves as a "master of composition and color."

After years of anticipation and a change to AIA’s bylaws allowing a pair to be nominated, Robert Venturi and Denise Scott Brown were awarded the AIA Gold Medal for their lifetime of work in the architecture field. Lamster and Lange gave it a "Good for Women in Architecture Award," adding that it's "about time for Bob Venturi too," while Ray Hu at Interior Design Magazine put the award at number 1 on his list of "15 Design Moments that Defined 2015."

All these topics barely scratch the surface of the critics' many different takes on 2015. To read these critics year-end lists in their entirety, follow the links below: 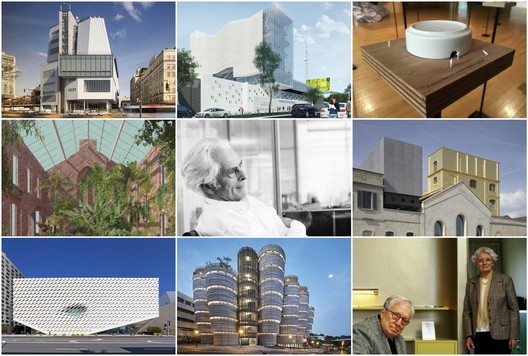