Heatherwick Studio has received approval to realize a new shopping area at King's Cross in London. By 2018, the practice will transform the city's 1850 historic Coal Drops Yard buildings into an "eclectic mix" of 65 boutique and destination shops and restaurants.

"Over a two-year restoration and build process, Londoners will see the existing Victorian buildings – the East and West Coal Drops and Wharf Road Arches – refurbished and re-purposed in a way that creates a stunning new upper level and improves connectivity, whilst allowing the original forms and functions to be read," says the architects.

“We are thrilled to finally bring this extraordinary and largely unknown Victorian industrial site into public use for the first time. These two historic structures were never originally designed for people to circulate through and by themselves would have never made a successful retail destination if we did nothing more than clean them and fill them with shops; the distance between them being too great to have any social chemistry with each other and only two stories of activity would not create enough busy-ness and vitality. So rather than adding an entirely foreign new structure to connect the old buildings, we chose simply to bend and stitch the two roofs together, forming another level of activity underneath, and framing and weather-protecting a dynamic new public space for the city.” 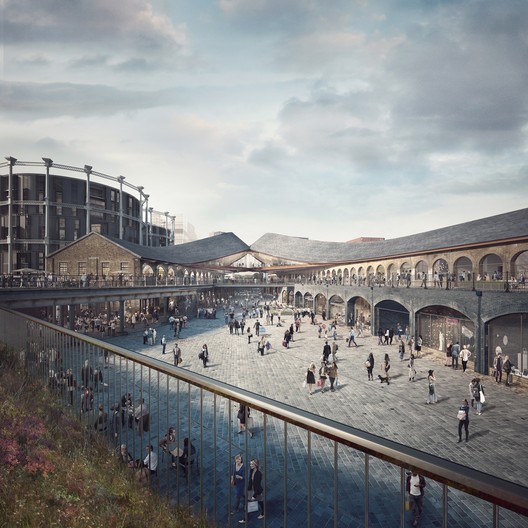