Save
Concrete and Glass: Lina Bo Bardi's Easels and a New, Old Way of Displaying Art
Share
Or
Copy 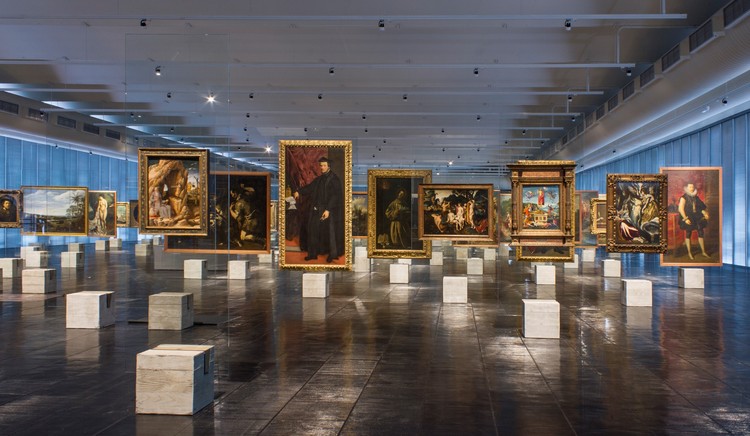 Upon assuming the role at the end of 2014, the current artistic director of MASP, Adriano Pedrosa, said that he wanted to look at the past in order to redefine the future of the Museum. Returning Lina Bo Bardi's glass easels to the painting gallery seems to be the height of this plan. How did you assess this proposal?

The first and inevitable step of the entire process of the institutional recovery of the museum, includes recovering the building and its exhibition techniques. Almost out of debt to MASP, to its history. I find the easels to be particularly incredible. It is a very radical and innovative way of exhibiting paintings that was recently recovered by many people who study the matter. Without a doubt, this is part of the museum's heritage that ought to be brought back, especially if one considers the conventional and conservative techniques, and the bad quality of recent mountings.

The museum has a tradition, deriving from its origins to be innovative, to propose movements and to keep them alive. After this revival, MASP will return to the drawing board, and it is important to think about what will be done from here onwards so as not to become a museum of the museum.

What were the main changes made by METRO in the redesign of easels?

The main change was to standardize the attachment of the works to the glass. Previously, each glass had holes made in it for one specific work. For example, the Van Gogh had four holes in the corners, while others were set directly by the frame. This created unwanted tension and each glass became exclusive to the work to which it belonged. When moving the painting, it was necessary to carry it with all the glass or the glass was discarded because it could not be used for other works.

We standardized the length and height of the holes. Now there are four sizes of glass and four hole patterns. We designed a metal platter with two bushings and screws that allow the work to be leveled. Both the works from the collection and the glass were divided into sets according to their sizes. Thus, all the panes of glass are 2.40 m high and their widths vary between 0.75 m, 1.00 m, 1.50 m and 2.20 m - the latter, which has two concrete bases, had never been created but it was in Lina's original sketches.

The base block also suffered minor adaptations to facilitate mounting and leveling, since the floor of the museum bulges slightly and is not completely flat.

What were these modifications?

We made four recesses underneath, where neoprene discs of varying height were placed to facilitate leveling. This was previously done with a wooden wedge of a makeshift shape. Aside from this, some criticisms made regarding the original easels was that they transmitted and amplified vibrations from the museum slab stone to the artwork. However, the neoprene makes it possible to absorb this vibration.

We also adjusted the glass pressure system. Since the wooden wedge slid diagonally, the original screw bent when it was tightened. So we elongated the channel and inverted the system. The wingnut now is positioned downwards, previously it was upward facing. We made a few changes in order to make the easels more resistant, more durable and easier to handle, so that they might be reused. However, we maintained the exact geometry and used the same material.

To achieve this, we had to examine the design and render it from scratch, always trying to transform it into a system, as we did with other display systems inspired by Lina's projects that we developed for other exhibitions in the museum, which were based on documents and transformed into reusable systems.

The works appear to be unprotected, how are they safeguarded?

This was one of the great works carried out this year by the museum staff: the creation of counter frames. These were made to facilitate the insertion of anti-reflection glass which protects the fabric.

Regarding the layout, will you also follow what was originally proposed by Lina Bo Bardi?

The original layout, the first one, was very difficult. But it underwent change; there were many changes during the almost 30 years of exhibition. Therefore, there was never a benchmark layout.

One big change was the one made to the lighting system in the museum. Originally it was composed of indirect, lateral illumination which shone onto the ceiling – when there weren't even air conditioning ducts -  therefore, there was homogeneous diffused light. This had been changed during renovations in the 90s, but it was visually too heavy and out-date technologically. Now, we installed LED lights and an automated system that allows for the adjustment of intensity of each light individually, using, for example, an iPad.

We repeated the pre-existing organization which consisted of transversal rows. We set out the selection of curated work in chronological order, beginning with the oldest piece of work and following a rigorous sequence of tiers. The distribution was based on a few rules that we made, such as widening apertures and spacing in accordance with the dimension of the art pieces and length of the easels, which results in a randomized distribution and creates an association amongst unexpected and interesting art pieces.

Tell us a little about the other exhibitions done by METRO at MASP.

We made two systems based on Lina's projects apart from this one, one in the basement for Italian and Brazilian Art, with large panels that were elevated, and another for a gallery on the first floor, with steel cables and modular panels. We used this system for the Brazilian and French Art exhibitions, and now, for the third time, in a very different way, in the "Foto Cine Clube Bandeirante: From Archive to Network" exhibition, curated by Rosangela Rennó, with tilted panels and large glass plates.

In addition to this, we made "Art in Fashion: MASP Rhodia Collection," which is an original exhibition of ours. As the museum is very transparent, and there are exhibits requiring very low luminosity, we installed a system of curtains that change density to conform with the exposed art pieces. In the case of the dress exhibition, which are very fragile, we decided to install a blackout curtain and we adopted this scenographic resource to structure the exhibition space. In the ¨León Ferrari: Entre Ditaduras¨ (¨Between Dictatorships¨), in a new gallery, where the museum shop previously was, we made a box within the gallery with the objective of protecting the works done on paper. This box was a change we made in order to reclaim this space. We always want to generate systems that could be reused in other contexts and events, as museums are different from temporary exhibits, and it is necessary to think of how to reuse systems for future exhibits.

In addition to the curtains, what were some other interventions proposed for the recovery of the building?

The first phase was the removal of layer upon layer of temporary walls that covered 90% of the windows, almost the entire museum, and we managed to open up MASP. There was a treatment done on these facades, with an application of special films, so they can stay open and co-exist with the works. Now we are addressing some issues and adapting the museum to current safety standards, which involves working with the heritage and going beyond the exhibition projects. A number of actions were planned to be made over the next few years to maintain and improve the building. For example, in the near future, the elevators must be replaced.

The interview with Martin Corullon was conducted by editors Romullo Baratto and Victor Delaqua on 7 December in the MASP art museum. We thank the museum board for hosting us during the exhibition.