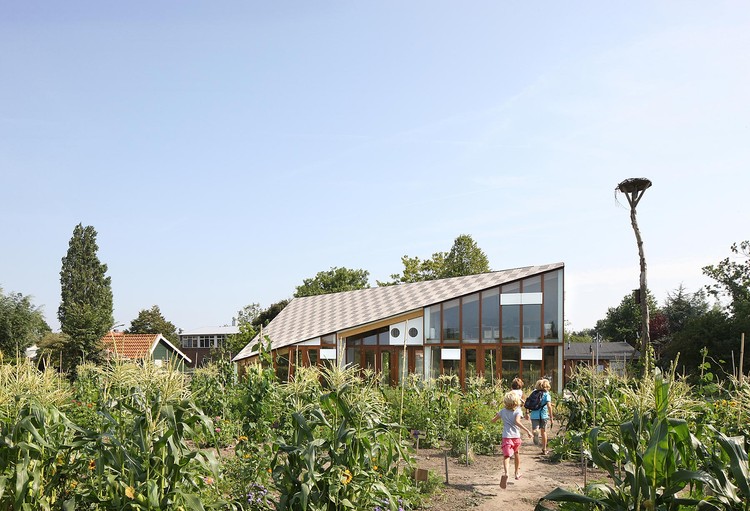 Text description provided by the architects. In Amsterdam, every primary school student is provided with his or her own 6m2 garden to care for. These students are also enrolled in classes where they learn about nature and the environment, held in one of the buildings dedicated to the purpose throughout Amsterdam. As of this year though, Amsterdam Noord becomes host to a new bui lding designed specifical ly for this purpose: the Nature & Environment Learning Centre. This new building replaces two temporary structures (which housed the program for the previous five years). In addition to being the first purpose-designed and bui ld centre in the program, it’s also unique in that it works both as a classroom and as an educational tool itsel f: the bui lding’s sustainabi lity can be seen and be felt by al l who come in contact with it.

As would be expected, the Nature & Environment Learning Centre (NME) is energy neutral. This in and of itsel f is not unusual: the nonconsumption of fossi l fuels is a property of almost any new bui lding (or at least it should be). What makes the energy management of the NME interesting is that its sustainability is visible, tangible, and easily perceptible to even the most casual observer.  For example, the seemingly eccentric shape of the building turns out to be a completely functional one, dictated by a desire to achieve optimal orientation of the roof towards the sun, thereby maximizing the efficiency of the bui lding’s solar col lectors.  There are also the large concrete slabs - Trombe Wal ls, more about those below - at the front of the bui lding, which heat up fresh air before it enters the classrooms, thus placing less demand on the heating system.

The location of the NME, situated in the middle of the school gardens of Amsterdam Noord, was just about perfect: a rectangular plot near the entrance of the site, optimal ly oriented to the gardens. The only significant chal lenge was that the long facade of the proposed structure was not precisely south-facing, which meant that the bui lding’s solar col lectors would not have been optimal ly placed for col lecting the sun’s rays. But by positioning the ridge of the roof exactly along an east-west axis - offset from the wal ls of the bui lding - t wo things were accomplished: firstly it solved the solar col lection issue by ensuring the solar col lectors were precisely south-facing, and secondly it provided the bui lding with its very distinctive shape. The design of the Centre’s roof also provided another learning opportunity for students due to its close proximity to the ground: at the roof ’s lowest point even smal l chi ldren can easi ly see the solar panels. Inside the bui lding, the floor plan is almost symmetrical, with the entrance in the middle. On the left and right are classrooms of equal size and on the first floor t wo identical rooms serve as a office space and a canteen. In the middle there is nothing, which provides a view through the glass entrance doors straight through to the school gardens on the far side of the building.

The north facade consists of window frames of about a meter wide, top to bottom. Operable window parts are clad with white lacquered wooden panels, providing an uninterrupted pattern of long vertical window frames.  On the south side, mixed in with traditional windows, are eight dark concrete slabs - sitting behind glass windows - mounted to the facade.  These are what are known as Trombe wal ls, a 1960s design of the French engineer Félix Trombe (1906 - 1985).  A lthough they’ve never gained a significant foothold in the design of sustainable bui ldings, Trombe wal ls provide a simple and intel ligent passive solar heating solution. The concrete slab - mounted behind the exterior window - is heated up by sunlight.  In the gap between the glass and the slab, fresh air is, in turn, heated by the slab.  From the inside of the bui lding there is a smal l slat that can be open or closed.  On a cold day, the slat is opened, al lowing the slab-heated fresh air to heat the interior of the bui lding.  On a warm day, the slat is kept closed, keeping the warm air out.

The Nature & Environment Learning Centre shows that Trombe-wal ls not only work very wel l, but that they can also provide a detai l that is both architectural ly and aesthetical ly pleasing. In order to increase the surface area of the concrete wal ls a pattern of recessed hal fshel ls is fitted. This pattern can literal ly be read - in brai l le - as an anthology of Dutch nature poetry.

The Centre’s roof and end wal ls are clad with wooden slats, which don’t function as  weather-proofing, but serve to hide the bitumen roofing from view. Using the slats also means that the solar panels - placed in gaps in the slotting - appear flush with the roof, instead of sitting on top of it (which is typical ly an eyesore).  The wood cladding also provided another opportunity for expression: in most wood-clad bui ldings the slats are arranged either horizontal ly or vertical ly. But when wood - as in this case - is used as a purely decorative element, many more possibi lities are imaginable. Wood flooring, for example, exists in a rich variety of laying patterns, and with equal ly exotic names: herringbone or block pattern, Hungarian Point of Versai l les. In the Nature and Environment Learning Centre the wood cladding consists of a block pattern of three boards, whose dimensions are matched to the solar panels.  And final ly, there is something of a residential aspect to the Nature & Environment Learning Centre: the east exterior wal l count 21 designer birdhouses: 20 for swifts and one for a bat. 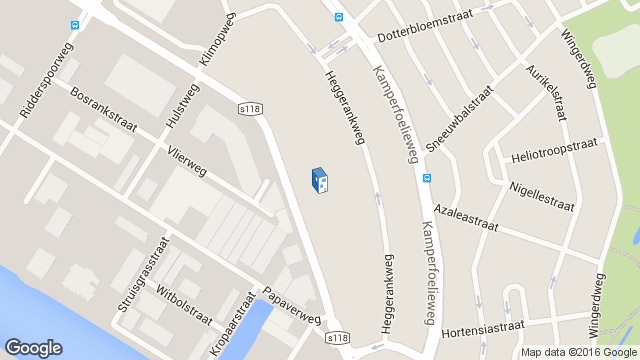