Save
The Landscape Architecture Behind the Lowline
Share
Or
Copy

In 2013 New York City ranked 14th among high density cities in the United States in parkland per 1,000 residents with only 4.6 acres/1000 residents. With almost 8.5 million people living in New York and more commuting on a daily basis, NYCers are finding it harder and harder to get outside and experience nature. The harsh winter and constant demand for growth and construction only make this more challenging.

In recent years New York has become famous for an unusual method of bringing green space to the city, the hugely popular “High Line” which reused industrial infrastructure in the creation of a new park. But as unconventional as the High Line is, it’s nothing compared to James Ramsey's of Raad Studio and Dan Barasch’s state-of-the-art proposed counterpart, the subterranean “Lowline." Working alongside others including Signe Nielsen, principal at Matthew Nielsen Landscape Architects, and John Mini, the pair recently opened the Lowline Lab, an environment similar to that of the actual Lowline site that gives the team a space to put their theories and ideas to the test, gather results and make final decisions. I had a chance to catch up with Ramsey and Nielsen to discuss the landscape of their test space. 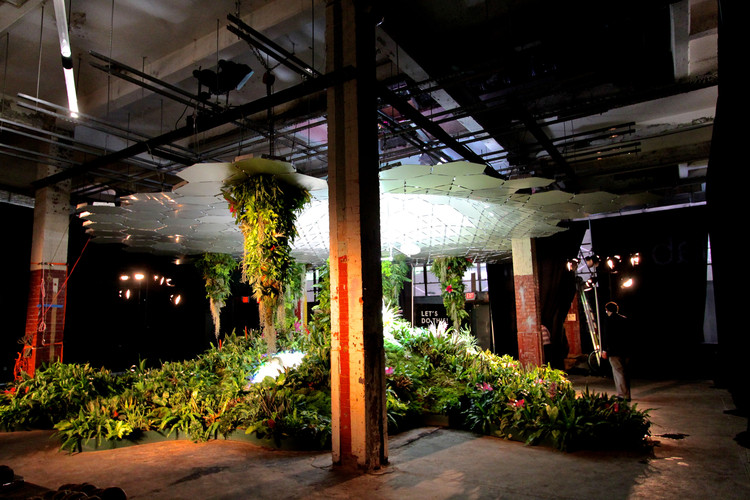 The Lab provides an opportunity to test James Ramsey’s innovative solar technology. His “remote skylights” allow for the collection and distribution of sunlight from above ground to the subterranean level. The tubes would allow for the transmission of wavelengths of light necessary to support photosynthesis, enabling vegetative growth. The exciting potential of this new technology gives the designers countless possibilities, but also presents challenges in their overall goal of creating what they describe as an “entirely new typology of public space.”

Due to the limitations of the sun-tube technology, the architects encountered a constraint never faced before: a fixed sun, or in the lab’s case three fixed suns. “It has sort of a disorientating quality because of that,” Ramsey observed, “you can’t really tell how long you’ve been in the space, you can’t tell the passage of time as well as you might otherwise and so even the shape of the terrain is meant to be a kind of commentary on that.” While traditional landscape architecture accounts for the sun’s path across the sky in its planning and designing, the Lowline team had to adapt to a fixed lighting distribution in the space. Measuring and mapping this distribution became vital to the design process. The architects began to map the light levels in the space in foot-candles and quickly found that the light distribution was not only projected horizontally but also vertically. It became clear that the topography of the project was going to be essential to its design and success.

The need to interact with different light intensity levels at various heights played an important factor in not only the distribution but also the selection of plants. These design choices also had to be squared with the need to create a “place for people,” an environment specifically scaled to immerse its visitors. The resulting design brings to mind a fusion between cave formations and plant life through the creation of living, green stalagmites and stalactites. Ramsey revealed his inspiration, “The creation of this dripping cave-scape is actually my attempt to envision what it might look like if we just left the Lowline on for a few hundred years – after people are gone.” Instantly visitors in the space are drawn into a surrounding of hanging plants and varied topography. “The way it's configured right now, we were actually able to create almost instant different spaces.” Nielsen commented “normally one would have to wait for a landscape to mature in trees and shrubs in order to feel like you were walking down a path or have some sense of privacy. By using this landform and the ‘tites and mites’—as we call them—it created a more instant spatial environment.”

The selection of plants had to be highly varied and intricately planned in order to create a thriving green space. Nielsen emphasized the need for an environment in which plants do more than just survive, one where they can take root and continue to grow. In our conversation Nielsen even pondered the possibility of plants flowering and eventually producing fruit. The strange and unique conditions in the lab as well as the availability of different species informed the selection of plants. Ultimately settling on a selection of 50 varieties of plants, the Lowline team found that tropical species had the highest probability of success because their natural environment, beneath a canopy of shade, was most similar to the environment created in the lab. The temperature, humidity and light level in the space all mirrored that of the natural habitat of the plants. After plant selection, plant placement was the most important issue; though the environment was highly controlled plants with similar needs had to be placed together: low water-need with low water-need and high water-need with high water-need, for example.

The team hopes to use the Lowline Lab as a “lab in every sense of the word.” During this experiment, the team will constantly be gathering data and observing the built environment. Ramsey hopes to use the Lab for four main aspects: to test the ability to capture light, to finalize the plant selection, to create an immersive experience and to develop its use as a public space.

There’s a long way to go from the Lab to the final product but just the initial idea and successful experimentation is an exciting step forward in not only architecture but also urban life as a whole. If successful the Lowline could revolutionize how we view “unusable” and previously wasted space.