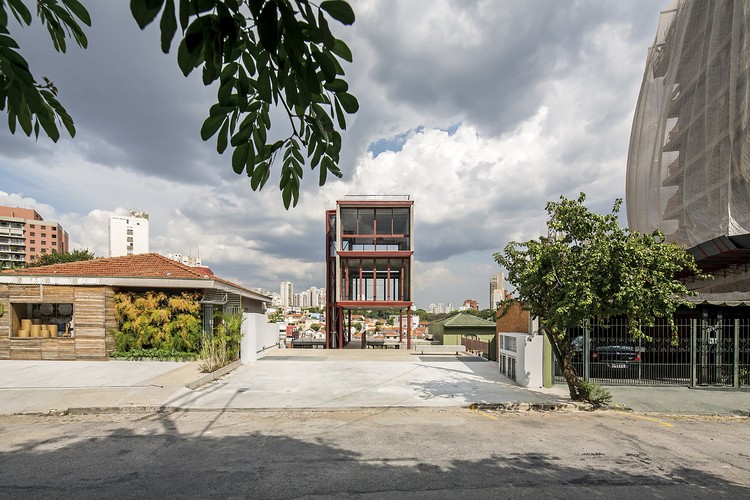 Text description provided by the architects. The project's main intention was to create a square on the ground floor, conformed by the extension of the promenade, also to preserve the view of the existing landscape: in the foreground, consisting of one or two storey houses, and in the background, high-rise buildings marking the occupation feature of the Pinheiros neighbourhood. Taking advantage of the original topography, this square-belvedere has reaffirmed the vocation of the Vila Madalena neighbourhood as "possessing/providing" various promenade situations, capable of surprising the pedestrians who circulate there.

The program required by the customer contemplated two completely distinct programs: a space dedicated to housing and another to work. As there was not a predefinition of these spaces, we had the opportunity to appropriate the land at the maximum capacity permitted by the legislation. Therefore, the building was developed in two independent volumes below and above the square, each one with completely distinct functions, maintaining the level of the street unobstructed, free from any obstacles.

The land originally had a steep slope, and in order to enable the integration of its ground floor with the promenade, a built foundation was proposed to reconfigure the topography. As it was below the street level, it was possible to occupy the maximum width (perimeter) of the lot, respecting the required setbacks. This foundation is organized into two spaces at the same level, connected by courtyards accompanying the sloping land.

The vertical circulation is strategically installed on one side of the building. An element capable of transiting between two opposite situations without obstructing the external void or the spaces built internally. Suspended by pilotis, the second volume is composed by two floors with free plans - common feature throughout the project - providing flexibility in the appropriation through the spaces by the users.

The construction had the available budget as the main premise. To this end, we followed the construction method of the office’s recent work in the same neighbourhood: Bar Mundial (World Bar) was built with metal structures and prefabricated concrete panels, which accelerated the time for executing the work. This prefabrication system with concrete elements was developed by our office in order to subvert the use of a material widely applied in Brazil. Often used for concreting massive slabs, the panels were used here in the sealing of the building, in pairs giving form to hollow walls executed in 25 cm wide strips with variable height.

The foundation was done with conventional concrete structure becoming a wall preconditioned to function as land consolidation. Massive concrete panels were interspersed with hollow panels; the massive ones prevailed in situations of contact with the soil, and in the slabs that conform the access square.

The suspended volume is structured by metal beams and pillars that bring lightness to its execution. The hollow panel system is used not only for sealing, but it also functions as slab by virtue of its enormous mechanical resistance - the slab was designed as a sequence of lattice beams with chords (top and bottom) in concrete and iron in its bracing frame. Therefore, the construction of this suspended volume was made quickly, as there was no need to concrete the core of the slab. This aspect reduced the load on the metal structure and the final cost of the work.

At first a limiting for this project, the budget condition motivated us to investigate new constructive alternatives. Its success was due to the execution of a space that did not require major investment, and without wasting materials. 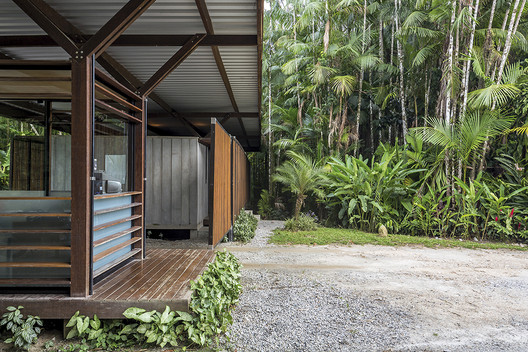 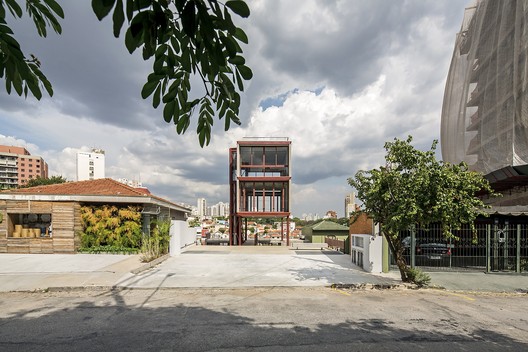