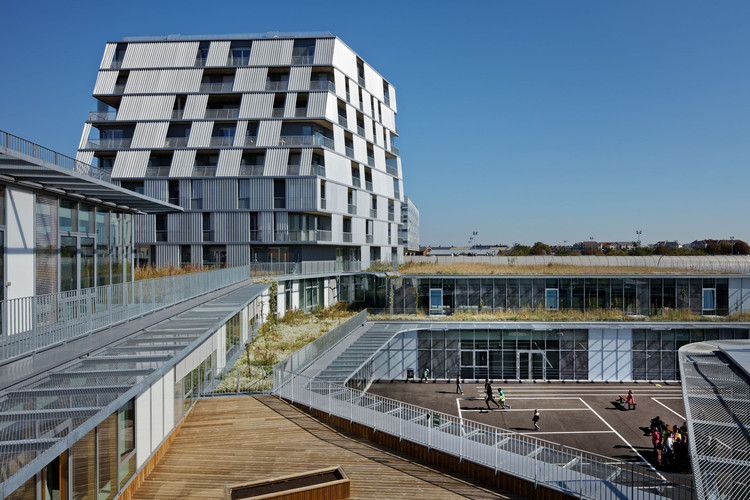 This school complex is located in Ivry in the Confluences ZAC (urban development zone), which adjoins Paris and is connected to it by means of an ambitious urban development project involving the extension of transport and road networks.

The complex is among the first facilities delivered to the ZAC. The site, undergoing a major transformation, stands at the intersection of two urban scales: one of a landscape open to the horizon and facing a water purification plant (designed by Dominique Perrault), and the more local one of a whole neighborhood in the process of emerging and for which the school complex and student housing serve as the core.

The school is laid out as a landscape of staggered and planted terraces. The playgrounds facing south take full advantage of the sunshine and of the landscape overhead.

A metal awning (opening gradually) follows the gentle contour of the classrooms, bringing unity to the interior and exterior spaces, the latter being linked via the covered playground which doubles back along the planted mall. This arrangement helps to separate the playgrounds from the mall and the apartment houses adjacent to the site (which in some cases rise up to 7 stories) and provides some shade from the hot summer sun.

This context offers a teaching opportunity on the subject of biodiversity, mainly thanks to two areas: the teaching garden, designed as a terrace accessible from the common areas on the first floor, provided with large planters for growing herbs and vegetables; the reading room on the mezzanine of the library, with a view over all the terraces.

The student dormitory is designed according to four main architectural principles. First of all, the project as a whole is organized to function rationally (superposition of the structure and technical shafts) and to be compact. Its distance from the rest of the program (it does not overhang the roof of the school or the one of the gymnasium) gives it a certain independence and detachment.

As the dormitory is laid out as far north as possible with a minimum of façade facing onto the avenue Jean-Jaurès, the platform does not block the sun. This ensures that the playgrounds enjoy plenty of sunshine.

The light façade is composed of perforated metal panels, with some being stationary and others sliding. They serve both to filter views from the street and as sunbreaks for sunshine from the east and the west. 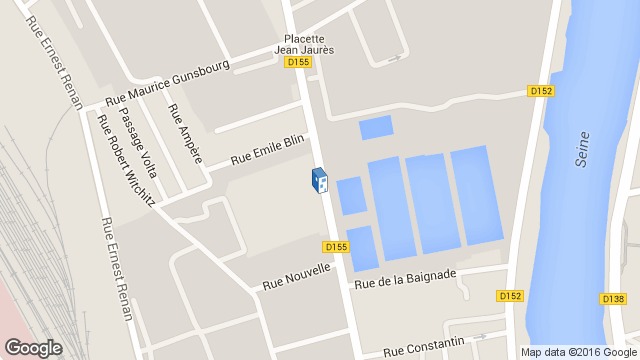