Relatively unknown outside his home country, Clorindo Testa (December 10, 1923 – April 11, 2013) was one of Argentina’s most important 20th-century architects. Consistently defying categorization, Testa had a hand in two of Buenos Aires’ most iconic buildings, the Bank of London and South America, and the National Library, as well as many others throughout his long career. Characteristically enigmatic, Testa would only ever acknowledge Le Corbusier as an influence, saying, “I never paid attention to other architects.” As a former colleague Juan Fontana described, Testa spoke the language of brutalism with an Argentine accent.

Born in Naples, Italy to an Italian father and an Argentine mother, Testa moved with his family to Buenos Aires only a few months later. At the Universidad de Buenos Aires, he briefly studied naval engineering and civil engineering, before switching to architecture. After graduating he spent several years in Europe, traveling through Italy, France, and Spain.

Testa’s first major commission came when he collaborated with the firm SEPRA to win the competition for the Bank of London and South America in 1959. Testa and SEPRA’s design artfully inserted a brutalist concrete structure among the Beaux Arts buildings on the narrow streets of Buenos Aires’ financial district by emulating the scale and massing of its neighbors. When the bank opened in 1966, 25,000 people attended the inauguration.

Among his other works, the National Library in Buenos Aires demonstrates how Testa’s career spanned the tumultuous decades of late 20th century Argentina. The heroic structure, cantilevering out from a structural shaft like the canopy of a tree, was originally conceived in 1961. But changes in government and the military dictatorships in the 1970s repeatedly delayed construction. The library finally opened in 1992, with some elements of the original design still left uncompleted.

Other notable designs include the Buenos Aires Naval Hospital and the Casa di Tella (now demolished). In addition to his successful career as an architect, Testa was also an accomplished painter and sculptor.

Read more of ArchDaily’s coverage of Clorindo Testa via the links below, or on our Spanish-language site Plataforma Arquitectura. 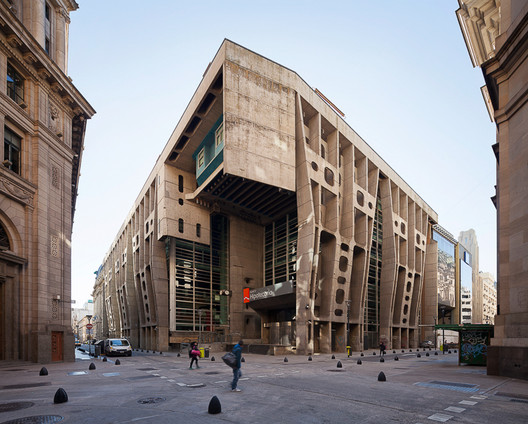