Save
OMA Selected to Design Manchester's 'Factory', Their First Public Project in the UK
Share
Or
Copy

Upon the announcement George Osbourne, the British Chancellor, said that "one of the biggest economic investments we can make in our nation is in our extraordinary arts heritage. That’s why, as part of our package for the Northern Powerhouse, we have backed the Factory with significant investment because we know it will provide an outstanding new arts venue to be enjoyed by people of all ages and backgrounds for generations to come."

The venue is set to feature an "ultra-flexible" arts venue that can transform from a 2,200-seat theater into an open 5,000-capacity space that will accommodate a wide range of art forms and performances. It will also serve as the new home of the Manchester International Festival.

The Architects' Journal reports that a Koolhaas "look[s] forward to realising this radical arts building for Manchester," stating that "it is wonderful to participate in the longstanding renaissance of the city, and particularly the [Manchester International] Festival, where real experimentation is expected." 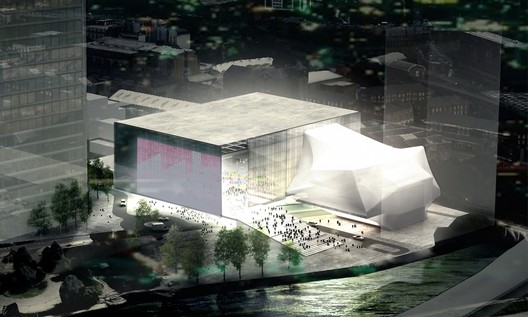