The International Association for Sports and Leisure Facilities (IAKS) has created an All-Time Award to celebrate their 50th anniversary. The Award highlights outstanding examples of sports and leisure facilities that have become both landmark and influential projects over the last few decades. See the eight winners after the break.

The design by gmp architects treats the Olympic Stadium as the central feature of the ensemble of monuments in the urban landscape. It takes up the overarching spatial elements and reinforces existing relationships. The strategy responds to the needs of monument preservation as well those of modernisation and users' requirements.

Beijing National Stadium by Herzog de Meuron, ArupSport and China Architecture was the centrepiece of the Olympic Green. Its design can be described as a perfect combination of elegance, simplicity and functionality. In this project, the architects and engineers have created a sports facility that is well-known as the Bird's Nest the world over and that has evolved into an important icon of the City of Beijing.

The 70,000 m² National Aquatics Center in Beijing by CSCE, PTW, CCDI and Arup had become well-known as the Water Cube long before the Olympics. It forms the heart of the Olympic Park together with the Olympic Stadium opposite. The façade of the Water Cube is clad with 3,000 different-sized, blue-tinted air cushions made of ETFE. Their arrangement is modelled on the natural appearance of soap bubbles and thus presents water in a different state of aggregation.

Oberhaching College of Physical Education was jointly planned by Helmut Blöcher Architects and Krawinkel Engineers. The 220,000 m² facility with its only two-storey buildings blends excellently into its surroundings. By lowering the voluminous building into the ground, the design has succeeded in keeping the building complex on a graspable scale.

The Holmenkollen site has been the cradle of evolution in ski jumping, and the facility has been upgraded and improved more than nineteen times. Its building history represents a form of record or architectural fossil of the discipline’s progress. For the 2011 World Championships, the ski jump was completely redesigned by JDS architects.

Richmond Olympic Oval was realised by Cannon Design as a response to the need for a signature venue for the 2010 Vancouver Olympic Winter Games. The building is located on 13 hectares of land along the banks of the Fraser River in close proximity to the urban centre of the City of Richmond. The Oval is a legacy facility, designed primarily as a post-Games sports facility after the Olympics. Today it serves as a multi-use sports, recreation and cultural centre for the region.

The Palau Sant Jordi by Arata Isozaki and Mamoru Kawaguchi was the contribution of the Province of Catalonia to the 1992 Olympic Games. As the focal point of the Olympic Ring, it had to be of superlative architectural quality. The Palau Sant Jordi is distinguished by its clear, functional assignment of sports and ancillary rooms. The task of creating a high-standard sports facility for various sports and multi-purpose uses has been outstandingly executed. The hall fits excellently into the Montjuic Olympic Park, largely by not dominating the main axis oriented to the Olympic Stadium. Its appearance recalls the hilly countryside surrounding Barcelona.

This Nagano Olympic Memorial Arena was built for the Winter Olympic Games in 1998. The impression of the interior of 216 x 80 m ice sports hall is magnificent. The movement of the roof and the side walls creates a sense of spatial expansiveness. An imposing load-bearing frame spans the interior. Externally, the arena impresses with its forceful and decisive form and with its clear choice of materials. 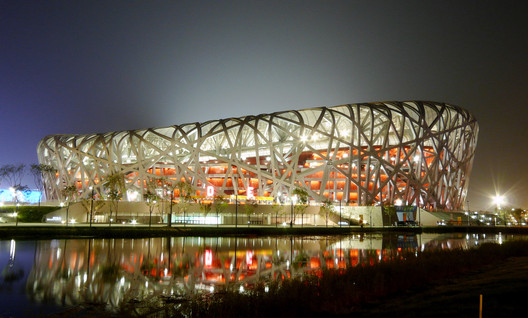