The Chicago City Council has voted to approve zoning for George Lucas' controversial, MAD-designed Lucas Museum of Narrative Art. Planned for a lakefront site on Chicago's Museum Campus park, near the Shedd Aquarium and Field Museum, the "mountainous" design faced opposition from environmentalists who claim the building is a "confiscation of public land." Despite this, and according to reports on NBC News, the Star Wars director won the Council's approval by promising more parking and tailgating space to Chicago Bears fans.

“The Lucas Museum of Narrative Art will be an incredible addition to Chicago’s Museum Campus,” said Mayor Emanuel in an official statement. “The Lucas Museum will join the 56 other museums in Chicago to provide new cultural and educational benefits for generations to come. And the new parkland will add more open greenspace that will be enjoyed by residents across the city.”

“We are very pleased with [Wednesday]’s approval by the City Council,” said Lucas Museum of Narrative Art President Don Bacigalupi. “The Lucas Museum of Narrative Art will be a tremendous educational and cultural amenity for all Chicagoans, and a major addition to the city's vibrant and renowned artistic community. It will also deliver nearly 200,000 square feet of new green space and accessible parkland along the lakefront for all to enjoy. We are excited to move forward with the Museum's construction.”

As a result of the controversy, MAD's original concept was scaled down back in September, promising a smaller footprint and more green space. Now 300,000 square-feet and 136-feet-tall, the dune-shaped building is designed to "merge into the land," says its architect Ma Yansong of MAD. "For this site, we need it to be organic. It works well with the water and the landscape and the green space," Yansong told the Chicago Tribune.

If permits go smoothly, the Lucas Museum will open in 2019. 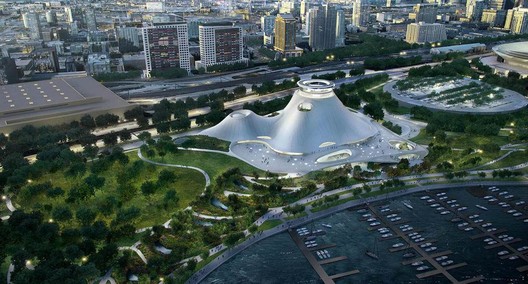