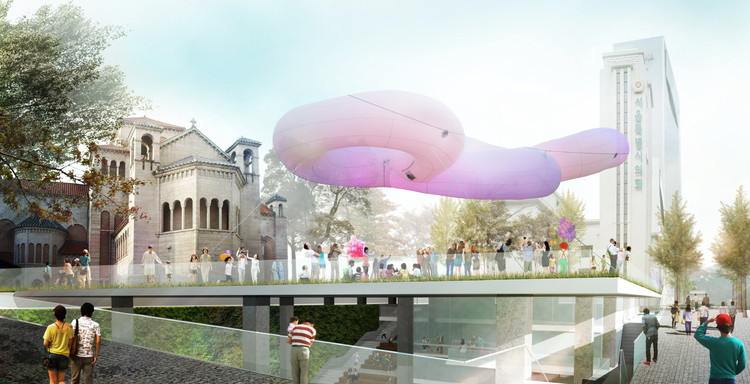 'Seoul Chronicle' was the most creative and brilliant proposal. It translated the layer of history around the site in micro and macro-veiw, interpreting the nature's level and layer surrounding Seoul. The urban platform lifted from the ground is the roof of an underground space, and also a square, where it can embrace numerous activities. The simple and understated rectangular platform is raised to the Deoksugung Palace Stonewall level, creating an attractive viewpoint, overlooking the cathedral, Seoul Plaza, and Sogongro. The platform creates a well-scaled wall and roof for walking spaces. The space, where time has transformed into material, gives people unexpected joy and undetermined exhibition space to host a variety of events, with Citizen Hall.

Time Connect had the most thorough analysis of urban structure, which made the citizen hall and 3D walking-space perfectly correspond spatially and visually to the Sejongdaero, British Embassy, and Seohakdanggil. The bench on the ramp is a gesture toward City Hall. The gallery and heritage museum along the ramp is well connected to the Deoksugung Underground path. If a long-term masterplan was finished, it would have made great cityscape, integrated with Citizen Hall.

This entry proposed a well-balanced design between Sejongdaero, the cathedral and the square. The 'platform of memory' lifted with the boundary of the visual axis created by Seohakdanggil and Sogongro. It minimized the protrusions above ground, and made great use of the space. If the 'stair stage of memory' is connected to the cathedral's parking area, it would make a meaningful node point, between above and underground space. 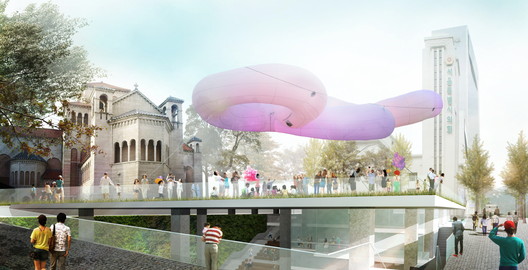