Russian-Chinese consortium Turenscape and MAP architects was announced as winners of a major competition to redevelop the Kaban lake system embankments in Kazan, Russia. Their winning concept, “Elastic band: The Immortal Treasure of Kazan” aims to establish a "continuous system of landscapes along the bank line, which will preserve the cultural and historical memory and become a basement for future stage-by-stage development."

"The water is turning into a real living treasure and heritage of Kazan," said the competition's organizer.

From the architects: The basis of the concept is creation of green and blue band along the lakes, which will unite the objects of nature, culture, residential spaces, tourism and transport networks. Within the project it is expected to create three types of landscapes, tied into bands and turning Kazan into a stable and viable city:

Turenscape and MAP architects' proposal was chosen by a jury comprised of key representatives of the Republic of Tatarstan Government as well as leading international, Russian and Moscow architects, urbanists, specialists in the field of landscape design and cultural programming. Work is expected to began at the embankments in 2016. 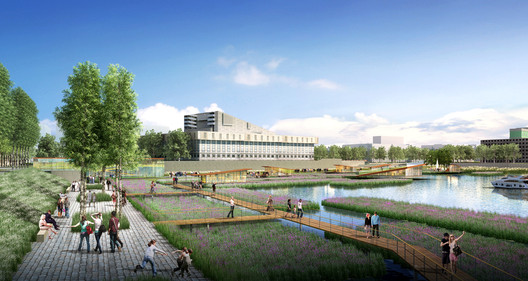