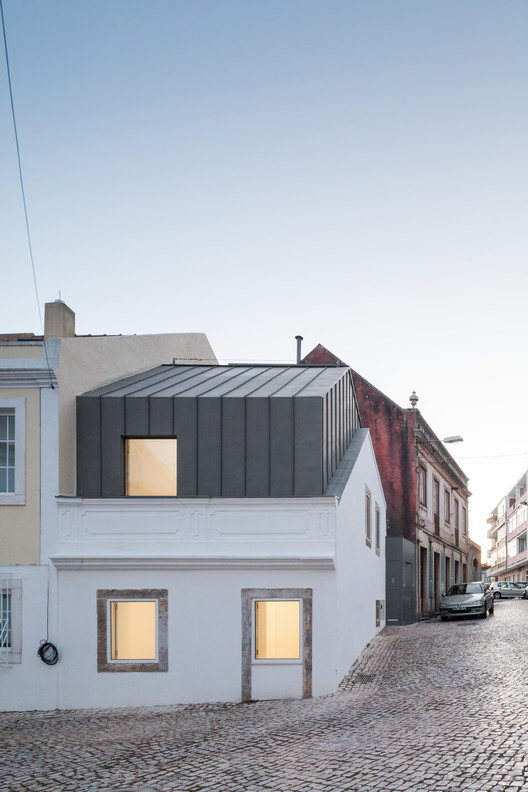 Text description provided by the architects. This intervention seeks to maintain only the two main existing facades of the building, at North and East, given the high degree of deterioration of the overall volume. Although the existing building is not a remarkable architectural example and with construction quality, contributes to the cohesion of the urban image of the set to which it belongs, so the maintenance of facades allow the continuity of the dialogue between the building and the context in which it operates.

This intervention, despite the surrounding references, admittedly has a contemporary nature, in which the choice of material - zinc - plays a fundamental role. Functionally, we propose a single-family house with two bedrooms, distributed on two floors, which the organization of the space is adapted to the metric existing window frames, subverting only the location of the main entrance of the building. Such access is now at North made on an intermediate level between the two floors. This option allows the creation of a small hall that makes the distribution and separation between the private and social areas, respectively located on the ground floor and 1st floor. So, while the ground floor we have the two bedrooms and a small sanitary unit, on the upper floor there is the living area and an integrated kitchen and a social sanitary facility. This intention of locating the social area at the highest floor, contrary with the traditional typologies, takes advantage of the volumetric rooftop, decompressing the space while giving it certain dynamism. This change in the distribution of common spaces simultaneously allows a visual expansion in relations established with the interior and exterior, creating more elongated perspectives and enhancing unexpected sunlight entrances.