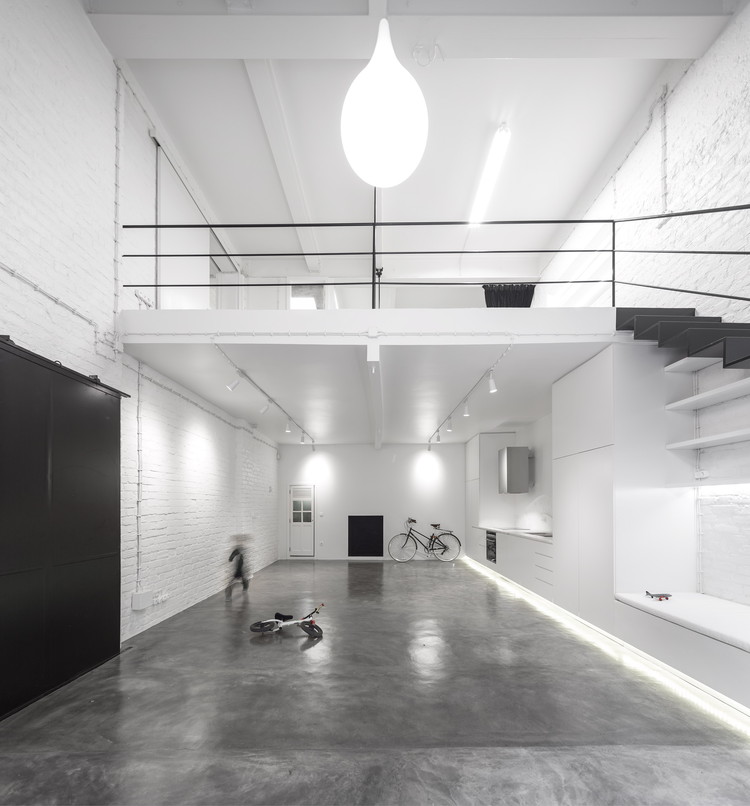 Text description provided by the architects. The existing space used to be a small abandoned lighting products factory facing the inside of a very disqualified block in the neighbourhood of Anjos, Lisbon. The interior was composed by two naves, one of which with 2 floors and the other with a mezzanine floor and a double height ceiling area.

The acquisition of the space by a film director and a photographer had the assumption of transforming the site into a place of artistic creation, exhibition and temporary residence. The morphology of the space showed ideal characteristics for its intended use since it was an open space with no partition walls.

The semi-basement like location means that the only openings to the exterior are the two major existing concertina gates in iron. However, at the 1st floor level, there are two low windows above these gates, through which an oblique light enters. The intervention created a working area on the left nave and a more private area, of residential nature, on the right nave.

Close to the right wall of the Loft, a new steel staircase giving access to the mezzanine was designed and in its extension a kitchen open to the whole space.

On the 1st floor a sound studio is installed in the working area, and a complete bathroom on the mezzanine. These two new compartments, have a translucent glass wall each, thus allowing the passage of light. A velvet curtain separates the sleeping room from the rest of the area.

Concerning materials, it was intended to recover the original properties of the industrial environment, with the necessary adaptations in order not to compromise the comfort of living. The existing plastered walls, result of various interventions which the space has undergone over the years, were picked to the bone in order to expose the solid brick or stone that constitutes it and painted white afterwards.

On the floor, the screed was redone, flattered and varnished. The iron elements such as balustrades, stairs, doors, tensioners (structure) and the new fireplace were endorsed and recovered, painted in black or white, thus regaining its major role in the space.