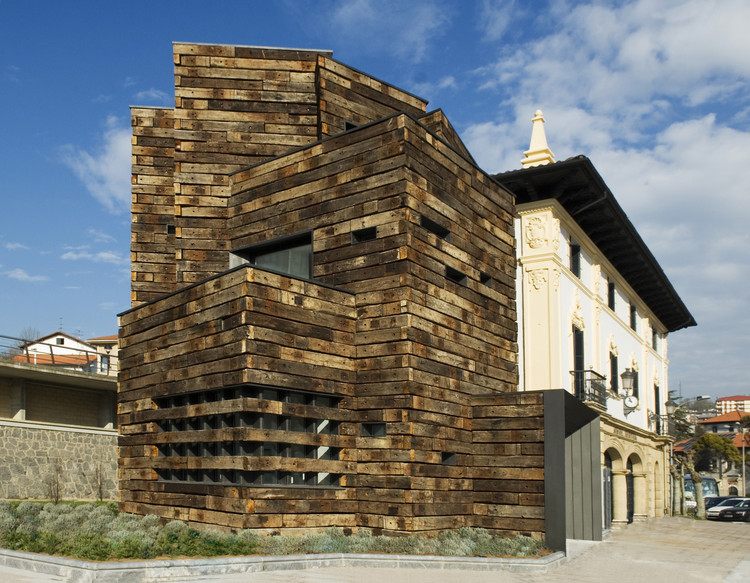 Text description provided by the architects. The railway’s memory of Urola.

There is no doubt that to make the extension of preexistence as the old station of Azkoitia, is an extremely delicate operation. The deep decoration and the good conservation of it, dignifies the facades of the old station, with a certain urban palace air. Despite its small size, the volume which it has to be preserved shows an architecture whose symmetry, facades’ decoration, corners and roof´s finishes has a clear intention to characterized it.

A sculpted box with an irregular shape, takes the new expansion of the library. Its heavy cover made of wooden railway sleepers evokes the history of the building, almost as if when the tracks were dismantled the old sleepers had been stacked near the station. The box character of the object which has the extension, allows not competing with the preexisting architecture. And at the same time, its condition of unfinished object values even more the current building.

The passant stations of the railway arise, often, as pre-designed buildings, from the board who design for a time all the stations of the route. Its deployment in the place is concentrated more with the railway line even than the city, trusting on the design autonomy. The railway´s disappearance does nothing but to reinforce that uprooted condition. The result is the eerie feeling which produces the library that its location was not a coincidence; and so, it could have been in any other place. It needed to take root.

The extension is located in the south side wall of the old station, so that is intended to relate the library with the Train´s Boulevard.  The use of the aged wood as the façade material, allows relating architecture and park, precisely because of its natural condition. In this way, the new library opts for the boulevard giving sense to its emplacement.

Before the enlargement, the stairs case, the service´s premises, the access and the control occupy almost a third of the building surface.  The needed enlargement of the uses of the library has been done by the procedure of emptying the existing building from all those uses, so that to gain such area.

With this, are achieved three big diaphanous room of 7x19m whose regular structure allows furnishing and subdividing them with light partitions in infinite ways. To the spatial attractiveness of unify the interior space in a coherent way with the unitary definition of the existing building´s façade, is added the great versatility and flexibility of use which provides the library.

In this way, that irregular sculpture of twinned pieces which has become the extension of the library is defined by the dimension of the rest of the uses that are concentrated the rest of the uses. There are the vertical communications, the access, a control on each floor, the service´s premises and other resting places and terraces which are open to the boulevard. The project is generated from the inside to the outside taking advantage of the flexibility that the during design process allows the irregular geometries. 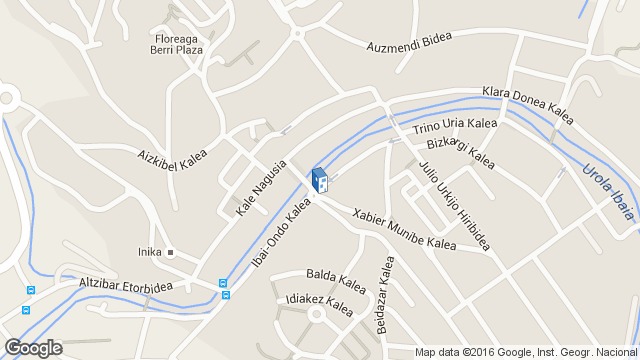 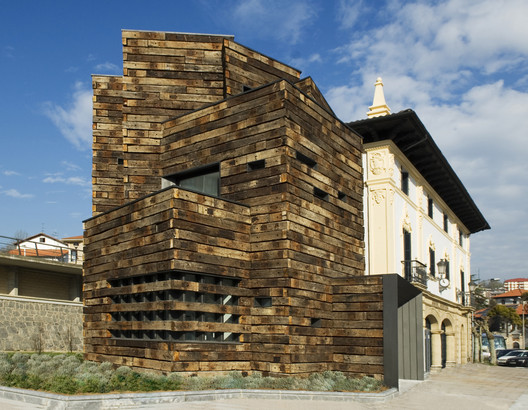