South Korean Haeahn Architecture, in collaboration with New-York-based H Architecture, has won a competition to design the Smart Work Center and Press Center at the historic site of the National Assembly Complex in Yeoido, which is the largest island in the Han River in Seoul.

The 23,750-square-meter building will be flexible in its uses and support "legislative functions of the National Assembly." Overall it will “house five distinctive programs: a press center with a briefing room alongside a small broadcast facility with a workplace for reporters; a highly-equipped smart work center which serves as a remote workplace for commuting officers and Ministers for the government; supplementary office spaces; underground parking; and welfare facilities which will include a restaurant, a banquet hall, and a retail component that will be accessible to both government workers and the general public.”

With an intentionally low building height, the design seeks to preserve the site’s park-like feeling, allowing the structure to be partially submerged in trees, but also to maintain views of the neighboring National Assembly’s main building.

The square rooftop of the design originates from the National Assembly’s original master plan, and the oscillation of the floor plates was added to create a stepped design that provides a greater amount of covered space in which programmed spaces and landscaped gardens can interact.

Furthermore, the stepped levels allow for security-separation, with lower-security programs on the lower floors, and maximum security on the upper floors.

A courtyard in the center of the building acts as a hub for community space, with the entry hall, lounges, and rest areas connected to it. 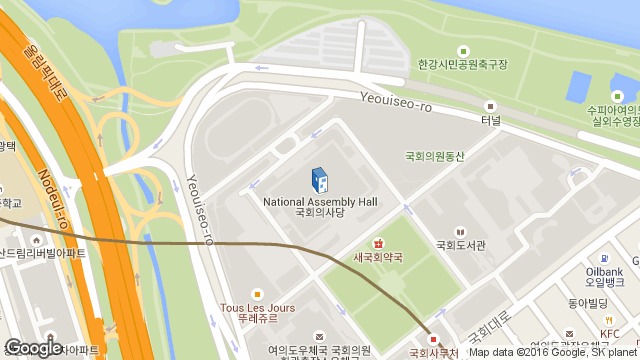