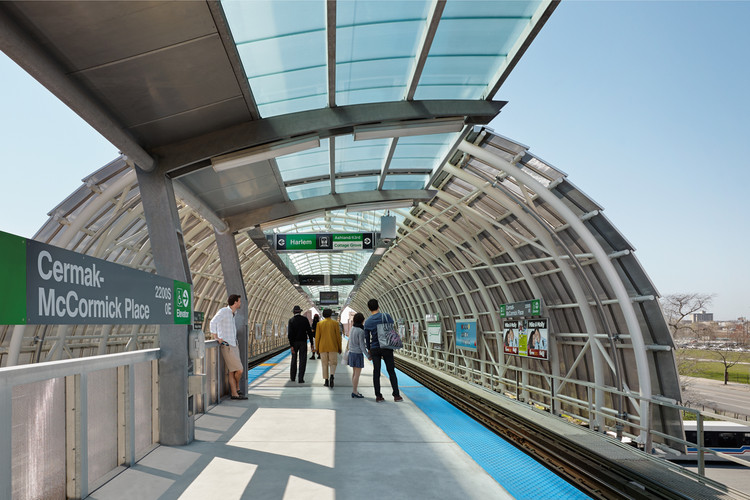 Text description provided by the architects. The Cermak-McCormick Place station, completed in 2015, serves the country’s largest convention center and a stretch of the Chicago Transit Authority (CTA) Green Line that has been without a station since 1978. The design, a light-filled and weather-protecting tube covering the platform, provides an attractive and joyful experience for riders and those passing by. It is the result of creatively working within constraints: short construction schedule, modest budget, and no suspension of service. Tracks could also not be moved, as a result, platforms approximately 15 feet wide would have to serve trains in a community with anticipated population growth and transit use. In addition, the client wanted the station to serve as an iconic gateway to a high number of first-time visitors to Chicago.

The design solution for the station was the development of a tube over Cermak Road, where the CTA right-of-way (ROW) is both widest and most visible to the public. Locating train berthing over Cermak Road allows views to Chinatown, McCormick Place, and Chicago’s skyline/ Loop. The perforated stainless steel and polycarbonate tube performs multiple duties: it provides wind and rain protection and a barrier-free platform; it places materials out of easy reach of vandals; and it creates a station easy to identify from a distance.

The polycarbonate and perforated stainless steel provides light, directs views, and subtly reminds passengers of the direction of travel.  Translucent polycarbonate is installed directly over the platform, while perforated stainless steel panels line the sides of the tube.  Four perforation patterns are used, none of them with more than a 23% open area.  Counter-intuitively, perforated materials deflect air if the percentage of “open area” is low.  The open area percentages used at the station is effective for usual wind speeds in Chicago.  Perforations on any given panel were either 1/8” or 1/4” in diameter.  In general, perforation sizes and densities are arranged to maximize views over Cermak Road and to protect from prevailing winter winds.  Additionally, a “swirling” overall pattern, created from the varying perforation sizes and densities visually echoes the movement of the trains.

Glass, polycarbonate, and perforated stainless steel are used to maximize visibility, views, and natural light in the station houses and on the platform.  For ease of maintenance and durability, glazed masonry units and granite are used for the interior walls and floors.

The 22nd Street (renamed Cermak Road) station was one of ten on Chicago’s first “L”, South Side Rapid Transit. The original two sided platform station, built in 1892, was at grade and served passengers of then steam-powered trains. In 1907, a third track for express service was added and the grade-level station was replaced with one at mezzanine.

Over its life, the Cermak Station served residents and a modest neighborhood commercial district.  Patronage numbers began to decline in the late 1960s.  The station was closed 1977 and demolished quickly there-after.  The closure created an almost three-mile gap between Green Line stations at Roosevelt Road and 35th Street.

The vicinity of the new station is home to McCormick Place convention center (the largest in the country), Chinatown, Bertrand Goldberg’s Raymond Hilliard Homes, and the Motor Row Chicago-designated landmark district. Located less than three miles from the center of Chicago’s central business district, it is an area that is seeing residential and convention center-related development, such as an arena and hotels. Prior to the opening of Cermak-McCormick Place station, the distance between the closest L station and the nearest portion of the convention center campus was half a mile. With the new station, the distance has been shortened by more than half. 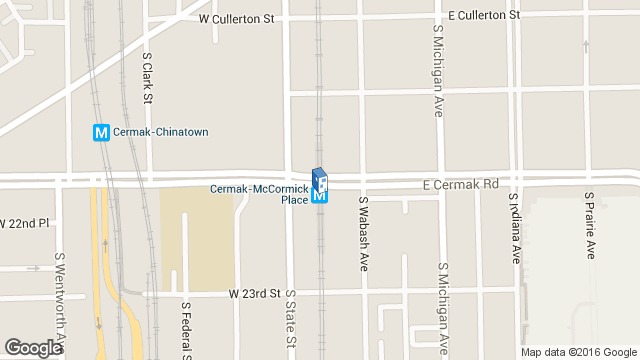 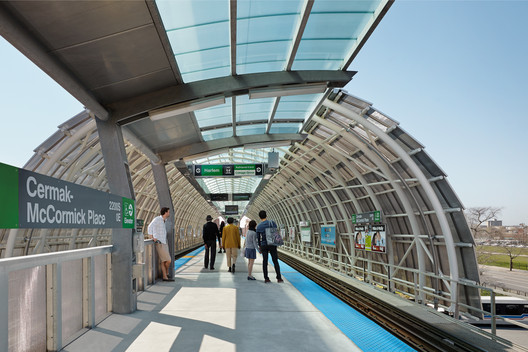