Concrete blocks. Ever since manufacturers developed techniques to make them cheaper than traditional clay-fired bricks, concrete blocks have been one of our most ubiquitous construction materials. However, this ubiquity comes at a price: worldwide, the production of concrete accounts for around 5% of all man-made carbon dioxide emissions, and concrete blocks (as opposed to in-situ concrete or concrete panels) contributes a significant portion of these emissions.

To curb these runaway carbon emissions, a California-based company called Watershed Materials is developing alternatives to the traditional concrete block which uses less cement, dramatically reducing the amount of carbon dioxide produced; they even have a product in the works which they hope will offer a widely applicable concrete block alternative which uses no cement at all. 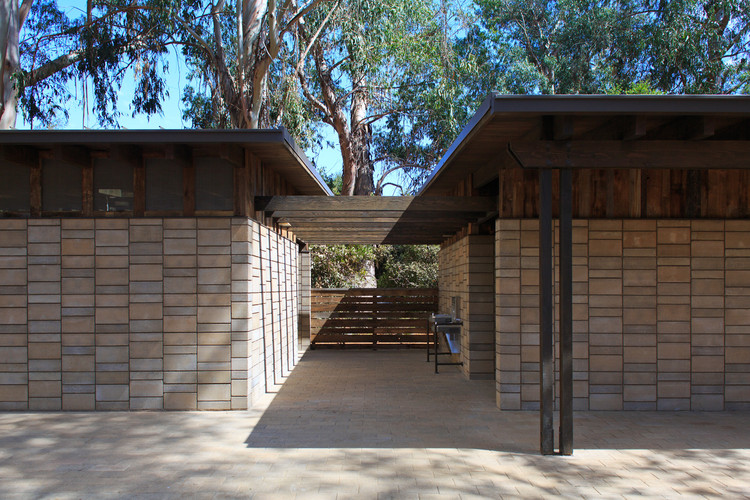 To date, Watershed Materials' flagship product has been the Watershed Block, which uses just 50% of the cement of a standard concrete block. And the other 50%? "There’s no 'other 50%' that provides the rest of the strength," explains Alex Wright, part of Watershed's creative team, to me. Rather, strength is provided by a machine that compresses the blocks together. "Rock forms in nature over the course of millions of years as pressure fuses loose grains into solid stone. Watershed Materials has developed technology to activate this process in seconds rather than millennia."

Another advantage of Watershed Materials' system is in the aggregates that can be used: firstly, their system can use a wider range of aggregate sizes than traditional concrete, and secondly, while aggregates for traditional concrete must be washed to ensure the cement binds to them properly, aggregates used in creating Watershed's blocks can remain unwashed. Not washing the aggregates saves both time and water, again making the Watershed Block an economical and ecological choice. However, it also means that aggregates retain the character provided by the local soil, meaning that blocks are attractive and context-sensitive without having to be artificially dyed.

However, the really game-changing idea is a project that Watershed Materials is currently developing. Aided by funding from the National Science Foundation, they're developing a technology that could reduce cement use in their blocks to zero. Instead, aggregate binding will be provided by a combination of a geopolymer binding material and a more powerful compressing machine. The geopolymer being used is a similar solution to the fly ash or blast furnace slag used to bind similar products on the market - however, fly ash is not widely available enough to make these products a large-scale solution. Watershed's alternative, though, is derived from natural clay minerals that can be found all over the world. Research into both the new machine and the new binding material are "advancing ahead of schedule and beyond initial expectations," with early tests of these zero-cement blocks having a compressive strength of 7,000 psi - higher than most commercially-available concrete blocks which generally clock in between 1,000 and 5,000 psi.

Right now, the Watershed Block is most popular with designers in the company's local area of California, but the company is confident that their technology could have wider, more transformative applications: in developing parts of the world, where cement can be expensive, Watershed Materials hopes that these technologies can make construction cheaper by using locally-available materials in place of costly cement. "We’re hoping to create a machine and mix design technology that can be used both in a factory in California and a small regional building site in the Dominican Republic," explains Wright.