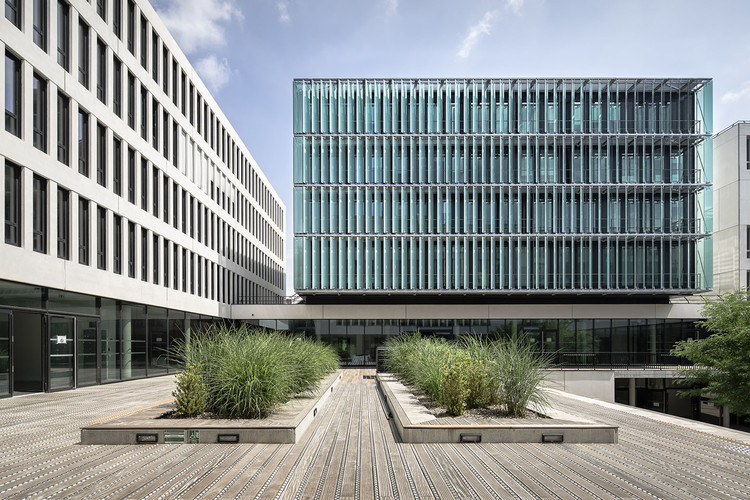 Text description provided by the architects. The "Pôle universitaire des Quais" is located in the university district on the eastern bank of the river Rhône in the 7th arrondissement of Lyon and comprises of five institutions:

The Institute of Technology (IUT) for around 900 students; The Department for Research and Higher Education (PRES); A canteen with a capacity of approximately 1,900 meals; A dormitory compromising of 200 beds; The International House of Languages and Cultures (architects : Thierry Van de Wyngaert and Véronique Feigel).

The structure of the building and massing within the block provides for a clear separation between the different areas of the IUT and PRES (client: University Construction Office) as well as the student accommodation and canteen (client: CROUS).

The individual components are encompassed in a compact ring around a spacious landscaped courtyard, which portrays a representative and quiet building block edge to the outside of the cityscape. The courtyard with its tiered patio areas functions as an open "Forum" promoting communication between the individual institutions.

The outer compactness of the new university building is supported by closely knit concrete façade pilasters. This appears as a subtly structured volume to integrate the project into its surroundings with respect to color and materiality.  The characteristics of this building are defined by the homogeneity of the light concrete, the use of a limited amount of different materials, and neglecting the building elements such as; windowsills and venetian blinds.

The uniform block structure at the main entrance is deliberately broken, as the autonomous block of the PRES significantly protrudes in plan and height. A gem-like exterior layer of adjustable vertical glass panels are used in the building ring-seemingly without touching it- thus contributing to its function and location opposite the existing University Construction Office.

The ground floor and the first floor are reserved for the entrance hall, the dinning hall and the classrooms. In the standard floors are offices, conference rooms and student apartments. The auditorium is embedded low in the centre of the block creating space for a large terrace above, which is linked via seating steps through the courtyard. The rich greenery of the patio creates an oasis within the compact urban structure that makes the "Pôle universitaire des Quais" a significant part of the urban university life. 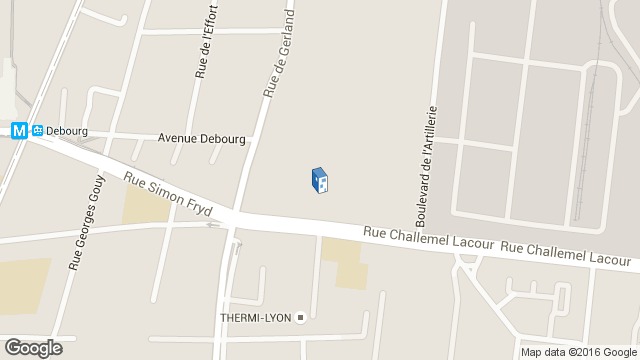 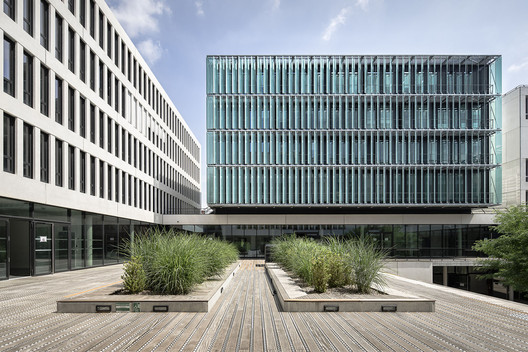