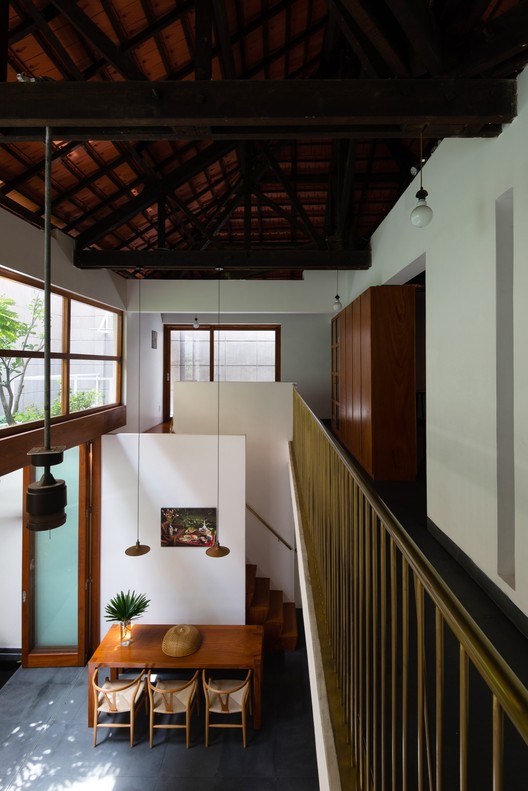 Text description provided by the architects. A peculiar quietude is a rare commodity for an individual living in the context of a metropolis city. Saigon, a vibrant, yet ecologically and mentally polluted city.

One can feel at ease and content toward architecture that awaken their sensibility of life and offer a place for refuge to rejuvenate their vitality. House 339 is a poetic interpretation of a house as a retreat. Although it has undergone many renovations prior the family acquisition, the intricate truss roof system remains intact, a true architectural gem in such city. Thus, it is preserved while the rest of the house is demolished and build anew.

Situated in a dense urban setting, the residence is surrounded by houses on 3 sides and faces one of the busiest roads in Saigon; traffic and noise pollution is always constant. It presents a blank face to the street, just a storefront and an entrance door leading to the garage, the kind of feature one can find on any busy street in Saigon.

The house unfolds itself, not all at once but only one veil at a time. A large stepping stone marks the spatial and atmospheric change from the garage to a more spiritual space, an entrance hall to the main living space.

A 3.12mx3.12m cube, in which the dimensional ratio between floor, ceiling, roof opening, and reflection pond is proportionally divided. Its modest combination of geometric simplicity, bare concrete wall, a bronze cross, stillness of water, movement of the sky offer an idea of deep connectedness to nature and the family religious belief. The spatial purity intensifies such ambient, hinting one’s soul toward a meditative state of mind.

A simple directional turn render one’s field of vision suddenly expanded. The more public part is gradually stripped away to reveal a humble living core. A stack of two vertical volumes connected horizontally to an atrium with large openings facing an outdoor garden. Planes of wall are strategically placed to divide the space into functional rooms. The harmonious interplay between horizontal layouts with vertical expansion intensifies the depth of space and senses of spatial freedom. The boundary between interior and exterior, the living space and the garden, seems to humbly dissolve.

If the light in the entrance hall carry a reflective essence, then the light in the living space is of proliferative quality. The house becomes a background, a place where the simplest natural phenomenon is respectfully embraced. Movement of shadow on dark volcanic stone surface, the trickling sound of water, a gentle breeze wind through the space, these natural sensation subconsciously facilitate personal detachment from physical world, and transcend the dweller mind into serenity.