Last month, Japan officially scrapped plans for the controversial Zaha Hadid Architects-designed National Stadium that was intended to be the centerpiece of the Tokyo 2020 Olympics. Since the decision, ZHA released a statement that denied responsibility for the project's ballooning costs, saying the Japan Sport Council (JSC) has been approving the project's design and budget "at every stage."

Now, British architect Richard Rogers, who served on the jury that selected ZHA's stadium design, has joined the conversation claiming Japan has "lost their nerve" and warning that their decision to "start over from zero" will harm Japan's "reputation as a promoter of world-class architectural design."

Read on for Roger's full statement:

As a member of the jury that selected architects for the Japan National Stadium, I’d like to express my concern about the decision to cancel the Zaha Hadid Architects’ (ZHA) design at this late stage.

For Japan to lose their nerve now, and abandon a design by one of the world’s foremost living architects that was selected by an international jury, will not only result in a poorer quality stadium for the Tokyo 2020 Olympics, but also in damage to Japan’s international credibility, and reputation as a promoter of world-class architectural design.

Every major project faces challenges, but architect and client can almost always work together to resolve them. If the design needs to change in response to cost or other issues, I am sure that the ZHA team would be willing to make them.

In 2004, I was co-chair of the jury which gave ZHA the award for the Aquatic Centre in London’s Olympic Park. This went through a number of design changes, but has since become an iconic building and popular with the public. 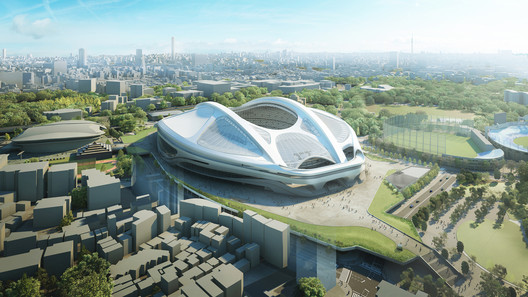