Anish Kapoor’s ArcelorMittal Orbit Tower in London will soon host the world's tallest and longest tunnel slide. The 114-meter-tall tower, already the UK's tallest sculpture, was originally built for the 2012 London Olympics. As the Metro reports, the semi-transparent stainless steel tube slide will start its descent 80-meters above ground within the structure's infamous lattice work, spiraling five times before embarking on a final 50-meter drop. Rides will last 37 seconds and cost just £5 a ride.

The slide will open in Spring of 2016. Bblur architecture and Buro Happold are responsible for executing the design, which was originally envisioned by the London Legacy Development Corporation as a way to attract more visitors. 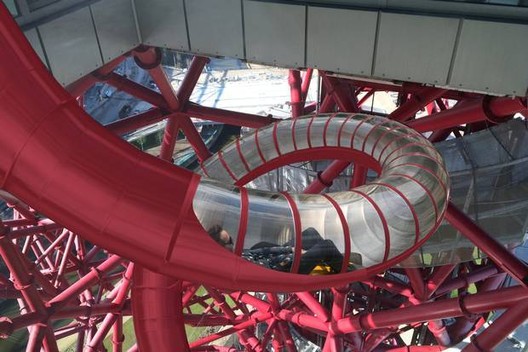