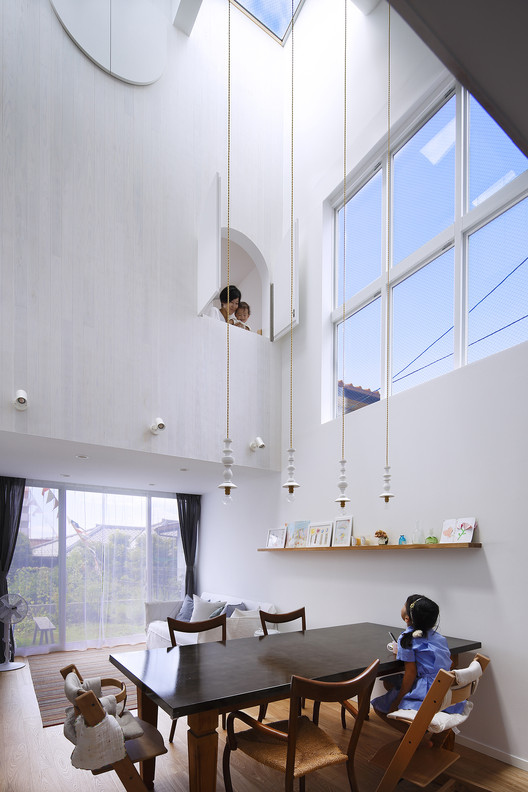 Text description provided by the architects. Site around this house is in a residential area that follows the old, lined residential with a relatively large site. However, in recent years, by subsequent generations or land prices soaring, large grounds of the original is fragmented, and it began to replace the three-story house, so different housing group sizes and height it had mingled. This plan site also is divided in half is similarly original site, As a result, the frontage of about 6M, became a long site shape in the back.

First, I take a parallel parking space on the road so as not to further narrow the frontage of the site, at which the remaining, to place the size and height of different large and small four volumes to overlap deviation with each other.

External space that is generated by the displacement of this volume, entrance approach and garden, bike racks, and a trash yard, also in each of the volume, by provided the size of the window that is different from the relationship between the neighborhood, it was placed in the natural light from various directions in the interior of this housing.

Thus, for the external, instead of complete on-site alone or building itself, multiple of volumes are independent, and the same time, committed nestled, it exists while in cooperation with the situation around this site.

In the internal space, by articulation that could be by the outside of the deviation, the individual spaces (living and kitchen, bedroom, stairs, toilet, bath) are created, they have led accompanied the floor step.

Main large volume of the center has a high-rise Void, by the large window and skylight towards the sky, while integrating the individual spaces that are scattered inside as well, at the same time, such as going to open the interior to the neighborhood, it forms an organic whole.