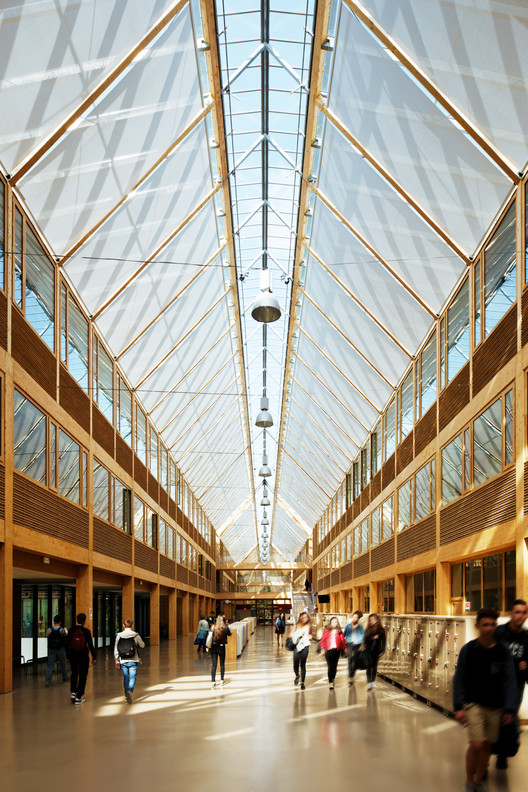 Text description provided by the architects. The figure of the industrial hall, the long and aerial morphology of which explains its rational and intense use, is intimately linked with the Île de Nantes’ past. It inspired the form of the Nelson Mandela High School, the broad prow of which pays tribute to the district’s Atlantic horizon and reactivates the immemorial ties between boat builders and building builders. For a high school is a voyage from the shores of adolescence to adulthood, a 24/24 odyssee in an industrial vessel, occupied hour after hour by young people between 15 and 20.

Lycée Nelson Mandela is a place for teaching, living and enjoyment. A place for learning in every sense of the word. A school from sophomore year to college prep classes. An apprenticeship in living together, then learning to live with differences through the mutual visibility afforded by its long atrium where all languages are taught to a diversified student body, some of whom live with physical or mental disabilities. Also learning the limits, for this place of life and residence is defined by the strict rules of a boarding school. Learning about effort through the regular application of examinations and the important place given to outdoor and indoor sports.

Learning about space and the way through it, for the wealth of its program speaks to the clarity of its architecture and the calm strength of its long indoor street that encourages exchanges and circulation. This indoor street combines a full program and blends a community that comes together between classes and spreads to the upper floors according to students’ schedules. This constant spectacle is given rhythm by the sun at its zenith, the variations of the light that shines down through the glass roof and the operatic arias that echo throughout the day. Classrooms spoke out between courtyard and garden on either side of the nave in a double thickness; the rooms are served by a hallway. Some rooms give onto the isle and its urban landscape while others look out at the nave. This duality unifies the building as part of a «campus park» that combines a plaza for events, a sports ground, the «five senses garden» and an auditorium around the school’s main body.

There are in fact three buildings under the glass roof that share their cold walls and views onto the nave from the documentation center’s «winter garden» to the cafeteria’s «café terraces». This bioclimate space is vivified and dilated by high and low views of the Loire River further off. The architecture fades between this interiorness and the urban landscape to highlight the rationality of the circuits and the clarity of uses. One end of the building contains the domestic functions like the boarding school, the cafeteria and the residences. While at the other end there are the areas around teaching such as the documentation and information center, the gymnasiums on the same ground floor as the classrooms, including a tall climbing wall, a kind of horizon for the inner street, suggesting the metaphor of an impossible escape.

By creating a new simple yet lively layout on an originally very insular plot, the project also contributes to developing the eastern fringe of the Île de Nantes. The high school, the boarding school, the sports complex, housing and cultural center work in synergy, offering access and working independence through individual addresses on the public throroughfares. With its resolutely urban setting the high school announces teaching that is open to the city. The boarding school, gymnasiums and cultural center are shared with the neighborhood’s residents and, more specifically the auditorium where the Orchestre des Pays de la Loire rehearses.

It is worth mentioning that the Nelson Mandela High School is made of wood. Wood was chosen not just for its rationality, the demands and precision of the design, but also for its ease of construction, its simple lines, its environmental lightness, its acoustics, smell and its harmony with the lived-in space. A bundle of indications that the agency happily conformed to from the very start of the project that was orchestrated around the extension of Lycée de Savigny-sur-Orge. It was another way for the architects to reactivate the logic of prefabrication by attaching it to its times. There was nothing dogmatic in their approach, just «the right material at the right place», as they explained. Although the high school orchestrates a radical break in image with the «metal and glass» message of the traditional hangar, it continues the philosophy in a permutation of its own time, i.e. respect for the environment and people first of all, then innovation.

Built on stilts, the high school frees the ground below, for it is both floodable and polluted. This simple solution made it possible to gain additional sports space. By standardizing the structure, typical of covered markets, it was possible to build quickly, thus respecting a very tight construction schedule. The blend of wood and concrete for the floor responds to seismic contraints: the wood for its lightness and flexibility, the concrete for its mass and ability to withstand stress. With its unusual design, the under-side of the floor in perforated wood panels becomes sound absorbant and acts as a base. Using storm wood (maritime pine of which there is an abundance in the region) for cladding the outside is in harmony with the required volumes. The dark, treated wood ages well rather like the salt stores typical of the region. The inner oak cladding gives a very precise response to the acoustic constraints. The wood moulding, like an accordeon fold, is a permutation of the high-performance acoustic principle of the famous Helmholtz resonance.

The auditorium that rounds out this arrangement is located in an adjacent building across the square. Its fold- away stage enables it to host the Orchestre des Pays de la Loire and also serves as their rehearsal hall. For acoustical reasons and to distinguish it from the high school, it has been built of concrete, again «the right material at the right place». 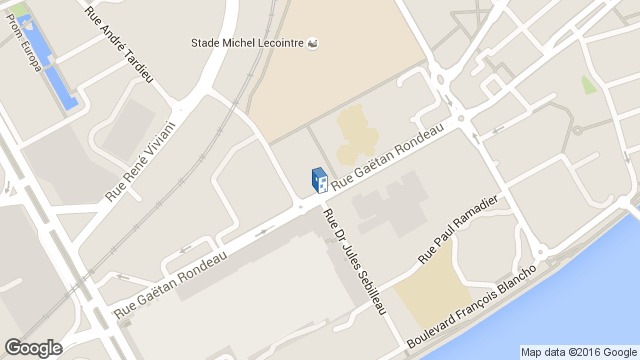