Save
The Luchtsingel / ZUS 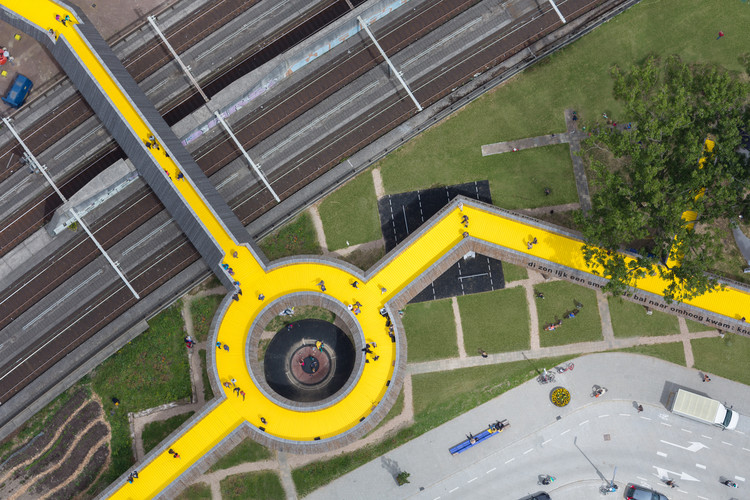 The Luchtsingel is open. Decades after their separation, the 400-meter-long pedestrian bridge has reconnected three districts in the heart of Rotterdam. The Luchtsingel was initiated and designed by the Rotterdam-based architects ZUS and is the world's first piece of public infrastructure to be accomplished mostly through crowdfunding. Together with the new public spaces, including the Delftsehof, Dakakker, Pompenburg Park, and the Hofplein Station Roof Park, a 'three-dimensional cityscape' has arisen.

'Based on the idea of Permanent Temporality, the Luchtsingel introduces a new way of making city. This means using the city's evolutionary character and existing forms as a starting point. Therefore, we have developed new instruments for design, financing, and planning',says Elma van Boxel, partner at ZUS.

When, in 2011, it was announced that a planned office development in Rotterdam Central District had been cancelled, leaving many existing office spaces vacant as a result, ZUS decided to take matters into their own hands. They used a former office building, the Schieblock, to develop a city laboratory, which currently acts as an important incubator for young entrepreneurs. With its ground-floor store, bar, culinary workshop, information centre, and its rooftop field called the Dakakker, Europe’s first urban farming roof, it has become a prototype for sustainable development.

Next followed the Delftsehof, which became one of Rotterdam's most vibrant nightlife areas, and then the child-friendly Pompenburg Park, where a vegetable garden has been landscaped next to a playground. The roof of the former Hofplein Station is currently being developed as a green space and events terrain. Additionally, the Hofpoort, a huge, empty office tower in the area, will be programmed by ZUS for the coming two years. These varied and new public spaces return this former heart of Rotterdam back to being green and liveable, with the Luchtsingel running throughout as a unifying factor. By simply increasing accessibility for pedestrians, the 400-meter-long bridge will ensure synergy between the various sites. It is now the norm to walk from the Station Quarter to the North, and to the Laurenskwartier via Pompenburg. These distinctive connections give the area a unique position in Rotterdam's urban fabric.

'The Luchtsingel, together with the transformed buildings and new public spaces, forms a new three-dimensional cityscape', says Kristian Koreman, partner at ZUS.

ZUS devised the Luchtsingel plan in 2011. In 2012, as co-curators of the International Architecture Biënnale Rotterdam (IABR), the station area was renamed ‘Test Site Rotterdam’. It consisted of eighteen interventions, all connected by one continuous route: the Luchtsingel. For financing, the 'I Make Rotterdam' crowd-funding campaign was started; for €25 anyone could buy a board inscribed with their name, and over 8000 boards were sold. In 2012, the 'Luchtsingel' won the Rotterdam City Initiative, which enabled further financing of the project. 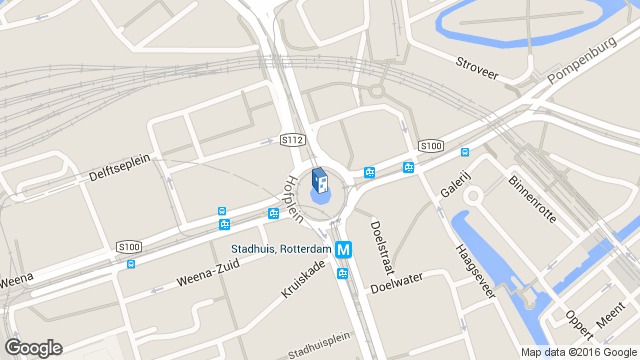 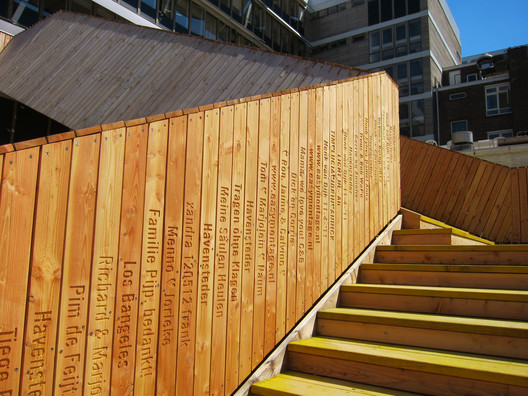 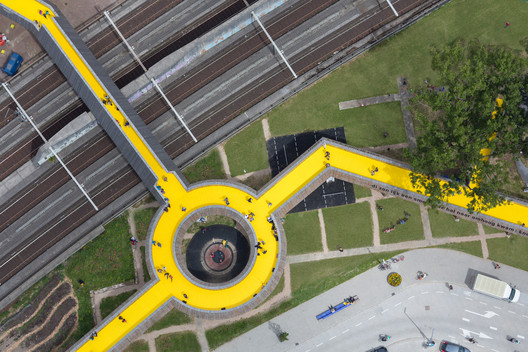