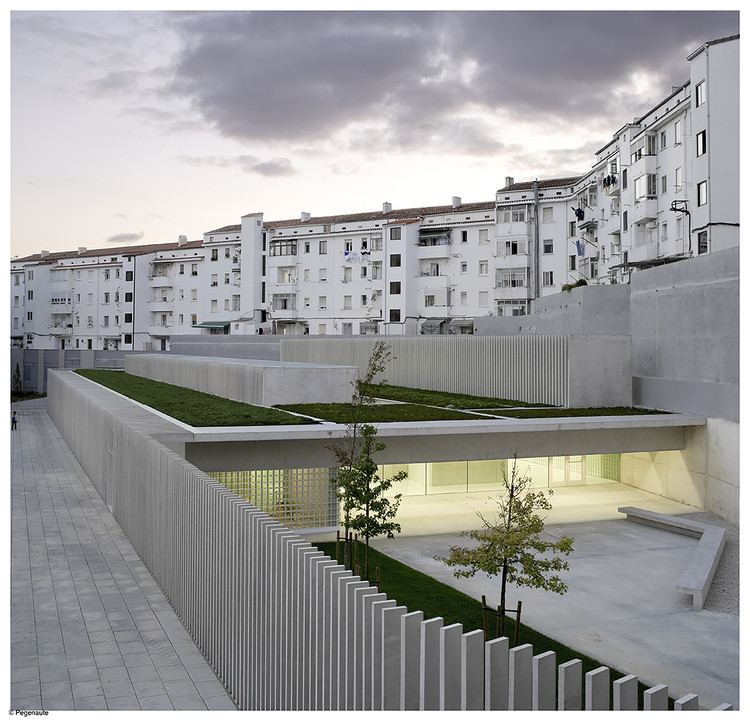 Text description provided by the architects. On the kindergarten project in Pamplona the value of the site is a main constraint, without it this project would not be easy to understand. The plot, result of a reallocation project, is located on the edge of a suburb in Pamplona. The geometry of such plot had practically a triangular shape, where two of its sides had the nature of dividing walls corresponding to the rear of a row of buildings, while the third side, and with the longest length, was orientated to the south, open to the square where the access is built.

Due to the extreme conditions of the plot and the program we thought that it was an exercise where firstly the common sense and the logic should be imposed in relation with the lay-out of the uses of the building and the priority of exploiting the sunlight prior than any other approach of highest complexity or exuberance.

For that reason, the proposal was not adjusted to an isolated construction in an aggressive location; we understood it as the plinth of the preexisting buildings. For that reason, we understood that the project should keep those values and to act as such. In that way was conformed, as an independent cell, which perimeter of changing concrete is placed and integrated on the plinth of this dividing wall. From this design, it was generated, with architectural mechanisms the different manners to light and to ventilate.

The project from the site and the program expected to work from the contrast adapting to the two situations; In one side the outside treated as an abstract plinth, in an ordered manner, modular and categorical. And in other side, the inside of the section treated as uneven, permeable, friendly and luminous.

The program was basically adjusted to five educational modules, a big general space to organize the prior mentioned spaces and to allow to be used as entertainment space when the climatologic conditions prevent to enjoy the two outdoors playgrounds, with its arcades also requested, besides additional indoor spaces for administration, services and facilities.

It was decided to place, from the organizational logic, the educational modules, understood as main spaces, at the only external side of the plot in order to ensure on those the direct sunlight and the views to the public space as the only values where the plot contribute with. From this decision it was developed the rest of the program in a natural way with the physical constraint of the plot: the educational modules were centered considerably on the lineal development of the square edge to release to its sides and at the ends the spaces planned to be used as outdoor playgrounds where the own geometry of the plot made difficult different uses and reinforce the idea that the spaces planned for children always have direct sunlight.

At the internal part of the plot it is placed and space between two supporting walls planned as the spaces of service no public, administration and facilities organized around a courtyard which supply it primary necessities, sunlight and ventilation.  Between both spaces separating two supporting walls, communicating those, it is placed the central space real distributor of the building, space of transits, space to play, multi-uses space which at the same time is communicated directly with the arcades and playgrounds.

Educational modules, comprised by a classroom, a bedroom, a workshop and the bathroom, are organized seeking the physical and visual continuity, except the bedroom which is isolated, to ensure the required objective.

In a plot with a big depth against a single façade, the proposal is articulated with architectural mechanisms of courtyards and skylights which ensure to the building the primary necessities of lighting and ventilation.

The skylights, as mechanisms to capture the direct sunlight, are overlap and increase in high according its arrangement in the depth of the plant with the mission of making the light penetrating at the same time than improving the visual impact of the dividing wall as it remains harmonized by those volumes. And the courtyards, diffuser of indirect light, reinforcing the lighting and generating an intimate atmosphere in each of the educational modules.

The building shows two accesses, the main one, placed almost in the center of the façade, is the only point in the lattice which allows the access to the building from the square. This entry allows access to the arcade and the main outdoor playgrounds.

Constructively the project is characterized by the utilization of prefabricated components of concrete. In one side in the ribbed forged which allow spaces with long spans, versatile and with constructive speed. And in other side the lattice of the façade, built also with concrete and with a prefabricated shape of concrete which makes the building special. This, as protection mechanism of the school to the square which without isolating, ensures four aspects in which the projects is interested: a proper control of the sunlight, a higher privacy in a building of such features placed at the ground floor, ensuring a better presence of this in the public space, assuming and harmonizing the typical under controlled “chaos” of those kind of building and finally making it jointly with the limits of the external courtyards built in the same style of the building having a higher presence in the plot conditions.

Finally the project since its design, and coming back to the beginning, was conceived under a strong environmental concern. And without any doubt, such orientation collaborates remarkably in one side using the geothermal resource, as renewable and clean energy. And in the other, making the upper deck as a garden area which besides improving the thermal behavior of the building improves the visual impact since is a single floor construction among higher buildings. 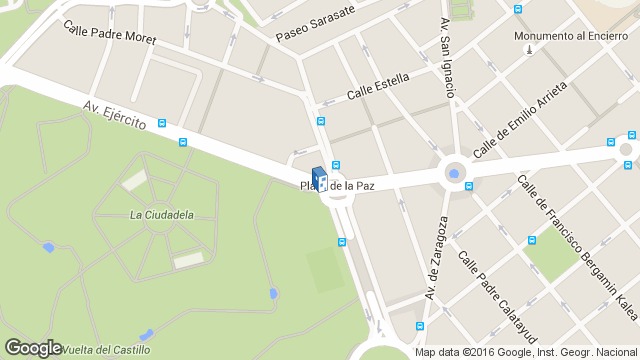 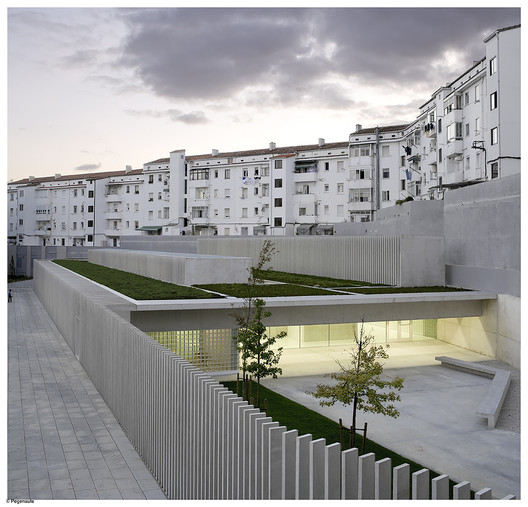