Chicago based architecture studio Design With Company, in collaboration with Arup, have constructed their winning proposal for the Ragdale Ring design competition, which asked entrants to redesign Howard Van Doren Shaw’s 1912 performance venue for a Chicago artists’ community. Their design lightheartedly references features of Shaw’s architecture, while creating a venue for acoustically unamplified performances. 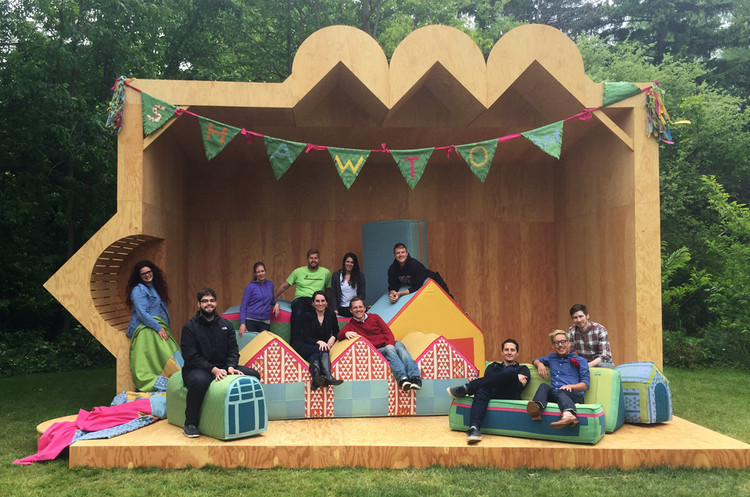 Composed of twenty pillows and a wooden box, which serves the dual purpose of housing the pillows and functioning as a stage for outdoor performance, Shaw Town is simple in form but embedded with rich contextual meaning, as the project’s shape is inspired by abstractions of Shaw’s buildings.

The geometric shapes of the pillows were created by analyzing recurrent design motifs in Shaw’s architecture and fragmenting them to produce engaging shapes, which encourage patrons to interact with Shaw’s architecture. "Ride them, kick them, hug them, lay on them or lean against them, visitors are encouraged to rediscover Shaw’s buildings without even knowing it," Design With Company states on their website.

The precedent research also influenced the stage’s form, which has simple geometries common to Shaw’s designs applied to the front of the stage, including "nestling silhouettes, tectonic decoration, and repetition in groupings of three."

Due to the fact that designing a wooden structure for unamplified performance in an area that frequently experiences strong winds posed significant logistical challenges, Design With Company consulted with structural and acoustical engineers from Arup. Using ray-tracing technology and digital structural models, Arup was able to help Design With Company create a project that could survive and function well in a difficult environment.

"Our unique acoustic and structural analysis tools were utilized to collaboratively inform design decisions with the architects – allowing all members of the design team and the owner to engage in the development and refinement of the ultimate performance space,” said Arup acoustical engineer Ryan Biziorek. "The simple but eloquent and efficient structure optimizes acoustic engagement and enhances the artist and audience engagement for the summer program.”

News Via Design With Company and PR Newswire 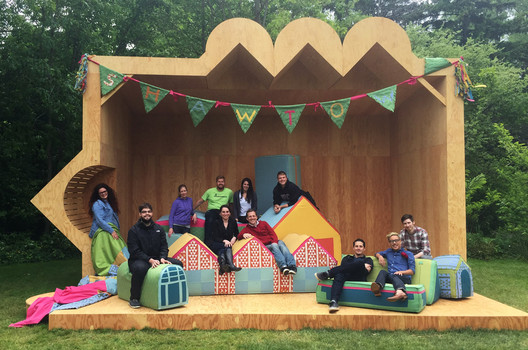