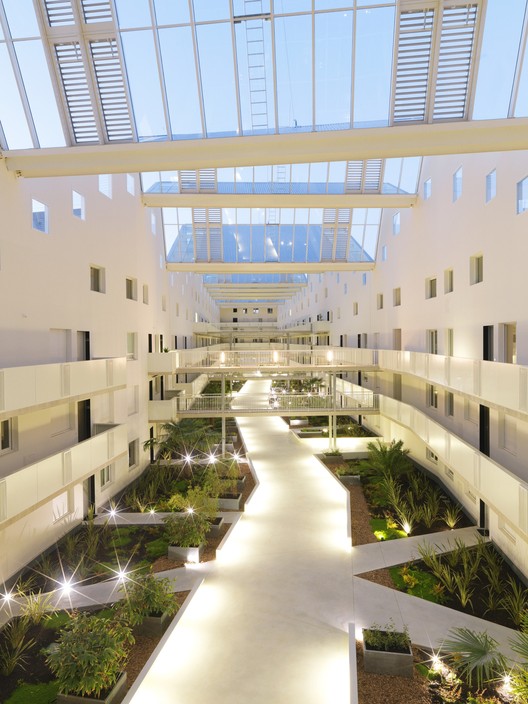 Text description provided by the architects. Les Bassins à flot Les Bassins à flot is an exceptional area in Bordeaux because of its maritime and manufacturing past and its patrimonial nature. The entire venue was added to UNESCO's World Heritage Site list in 2007. It is also singular for the position it occupies in the Bordeaux urban development project. This vast port area acts as a kind of hyphen between Les Chartrons and Bacalan and between Lac and the large area of La Bastide thanks to the recently constructed Bacalan-Bastide bridge. The Bassins district is serviced by the line-B tramway and contains extensive public spaces intended for radical transformation, i.e. the port area itself, but also a reconfiguration of Place Latule, rue Lucien-Faure and the Bacalan-Bastide bridge. Among the buildings and elements of this heritage site worth mentioning are the submarine pen, the dry dock slips, the locks, the silos, the food-storage buildings, some of the warehouses on the rue Achard, the cranes and, of course, the docks themselves for their size and shape. Just as remarkable are the 18th-century Richelieu house, the Garage Moderne, the Nautilus, the paving-stone quays, the bridges, the harbormaster's office, the Lesieur factory and the water that runs into the submarine pens. Developed by Agence Nicolas Michelin & Associés with the Atelier des Bassins, the urban development project was based on the idea of "doing cities differently".

This meant not continuous strips of land that characterize the Chartrons district and not copying the rationale of a small island with the landscaped interior gardens of the Bacalan district. The urban-planning project set out to create a new urban fabric adapted to the specifics of the wet docks. This new neighborhood facing the two central bodies of water asserts the multi-purpose intention of the wetlands area (dwellings, work, activities, hobbies, etc.). Fun, cultural and economic activities have been created or reinforced to stress the idea of a place for urban living around the theme of "active water". In order to conserve the notion of access to the docks, the project preserves as many of the existing road patterns as possible as well as openings onto the water. The existing small islands have also been preserved to define the size of the new operations. The macro-plots or big islands have consequently been divided up so as to adhere to the occupation principles as defined in the master plan.

The Achard-Blanqui-Étranger block fits into a fairly nearby environment that is in full mutation. The overarching goal of the urban planning project led by Agence Nicolas Michelin et Associés was to piece together a mixed block where buildings for collective housing would share space with nearby facilities and buildings that maintained their existing activities or created others. The project has, as far as possible, preserved buildings already housing activities and rehabilitated patrimonial elements. Such was the case for the hangar located on the rue des Étrangers that is presently home to the "Garage Moderne" association.

The desire for transparency towards the docks has been emphasized by placing buildings perpendicular to the port zone. This configuration ensures equal views for residents. The blocks are crisscrossed by landscaped paths between the new and existing buildings. These pedestrian spaces cut through the depth of the district on a N-E/S-W line from outside the neighborhood (Chartrons, Bacalan) down to the docks. The "unusual" buildings erected on either side of the paths echo the typologies adapted to the docks. Based on the existing urban forms, the types on offer ("residential hangars", activities buildings, small "towers" and "hybrid" buildings) compose different blocks and are linked in parallel in a blended program to the block and buildings. The roofs of the new buildings are in shed-like sloping sections open to the north.

Living in an Atrium

Designed along lines of a lived-in boathouse, the two apartment buildings for Nexity and Domofrance are organized around two parallel main buildings with a shared atrium-covered garden. Shared space The two main buildings are each 10 meters deep and stand face to face. This arrangement allows for a 15.50-meter wide space that serves as a shared area that contains the ground-level parking lot and a garden on the first-floor platform that is open to all residents. This shared space is covered by a shed-shaped roof that is mostly glassed in to the north and supports photovoltaic panels on the southern side. They are walk-through with an east-west prospect.

They are accessed by passageways that give directly onto the garden. Four shared reception halls serve as entrances to the two main buildings. The atrium, an inter-climate space The central area is an enclosed atrium that is ventilated naturally. In the summer this ventilation makes it possible to maintain compfortable air temperature. During the day the heat is evacuated by large openings located on the tympanums; while at night the atrium continues to be ventilated with the space benefitting from the earth's and buildings' themal accumulators. The volume of air moved and the combined thermal accumulation by the ground and the concrete mitigate the strong summer temperature variations.

In winter the ventilation is restricted in the central space so as to accumulate the sunshine captured by the south-facing roof and drawn by conduction towards the inside. Likewise the sunshine passing through the tympanums enables the walls and plant-supporting soil to warm up. These two factors directly contribute to creating an inter-climate space under the atrium. And the stored warm air is used to ventilate accommodations, thus reducing heating needs. This more temperate climate also makes it possible to considerably reduce the insulation required in the garden-facing walls. Covering this central area therefore makes it possible to have considerable energy in-put. Indeed the atrium becomes a controlled inter-climate space enhancing the interior comfort level all year round. Moreover the roof surface thus exposed makes it possible to alternate the opening part (to the north) that provide light, ventilation and the regulation of the temperature for the entire project. The immovable south-facing parts are particularly well disposed for supporting the solar panels. The shed-like roofing The roofing is a succession of north-south facing sheds in the manner of the hangars present on the site. On the south-facing side of the roof there are photovoltaic panels with some of the elements being transparent. On the north side the roof covering the public park is made of glass. The east-west facing tympanums are equipped with manual glass vents. The north-facing roof covering the accommodations is made of metal.

Contextual plant-life The roofed garden covers about 1,500 sq. m. It owes its uniqueness to the vertical plants, the "meeting" points and its criss-crossing paths that lead directly to the accommodations. The plants have been selected according to the place's context and buildings' architecture. The tallest plants are out in the middle and wind along the paths. The plants are smaller n size as they approach the walls, changing from an underbrush effect to that of a moor at the edge of the buildings. The land is at different heights also to increase its volume and give the tallest plants room to grow.

The temperature in the inter-climate space is optimal for temperate and oceanic climates (even Mediterranean) plant-life. There is mulching between the plants that helps to maintain a certain moisture in the soil, thus reducing the need to water. The plants also serve to provide a certain distance between the accommodations and the public passageways. There are larger spaces at either end of the garden, and a gazebo on the southern side opens up views of the surrounding landscape and is big enough to contain playing space for young children. The Domofrance building stands on the west side of the development on a plot measuring 4,826 sq. m. It is surrounded by rue Blanqui, rue Ouagadougou, rue des Etrangers and an east-running path. The Nexity building covers 34,168 sq. m and stands on rue Ouagadougou to the north, rue des Etrangers to the south, rue Achard to the east and a path to the west. 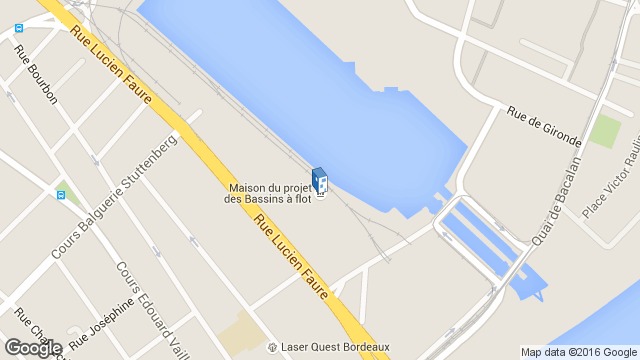