Save
'The Future Will Just Have to Wait': London's 10,000 Year Masterplan
Share
Or
Copy

Alice Theodorou, a graduating masters student from London's Royal College of Art, has developed a project which attempts to combat the challenges that London is set to face over the next 10,000 years. Her scheme factors in projections for population growth and then decline, rising sea levels, stricter energy targets, material depletion, future space exploration and, most interestingly, language obsolescence. 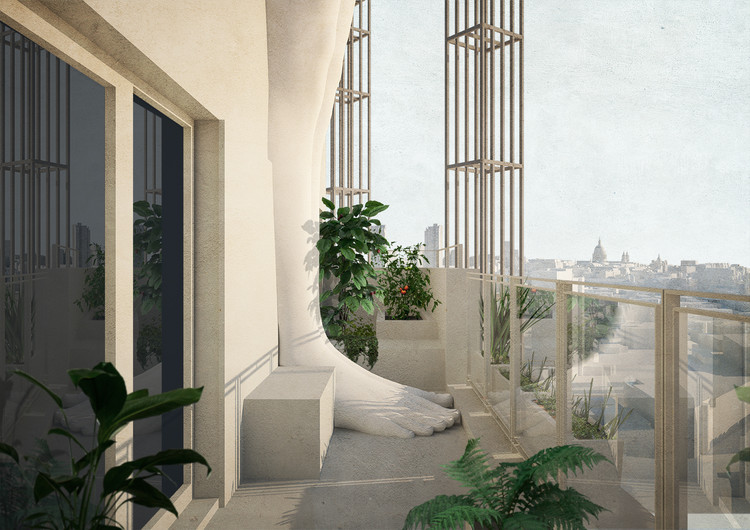 The project began when the development plans for the Mount Pleasant Sorting Office became a hot topic for local media. Boris Johnson, the current Mayor of London, approved a controversial design for the site in spite of fierce opposition from two local authorities — Islington and Camden.

Theodorou began attending meetings organised by the Mount Pleasant Association, a company and charity established by the local community who are tasked with creating an alternative conceptual design for site after receiving funding from the Greater London Authority. She became "increasingly frustrated with the fact that the argument had become fundamentally about architectural style and not about a long-term strategy for the site." So, as an antidote, she decided to produce an alternative proposal considered within the context of a 10,000 year masterplan.

I felt that the proximity of the Mount Pleasant site to the new Crossrail station Farringdon had played a signifcant role in Boris’ controversial decision to override Camden and Islington council's refusal of the current scheme. The level of first-hand exposure available through planning meetings as well as the vast media coverage of the process, made this site a particularly rich scenario to investigate.

Boris Johnson’s recent abuse of his planning power is an insult to what proclaims to be a democratic system. His habit of overturning the decisions of local authorities to grant permission for numerous unpopular developments has set a worrying precedent for London's future. As the capital continues to undergo widespread redevelopment as a result of the long-anticipated Crossrail link, the need to question the short-term, fnancially driven strategies employed by developers has become of paramount importance.

To ensure its own longevity, the building utilises a series of caryatids and atlantes as its structural support system. I discovered that one of the oldest artefacts ever discovered on planet earth is a figurine of a woman which is estimated to be over 40,000 years old. Carved from mammoth ivory, this depiction of the human form resonates with current generations just as it must have done when it was created. Therefore, in order to ensure the relevance of the scheme over multiple generations, the building favours the endurance of the human form over the fleeting nature of architectural style, utilising the caryatids and atlantes as a tool for reinforcing the ambitions of the scheme.

According to Theodorou, "the building exhibits the evolution of the human form as a reminder of our temporality, and is an expression of how the body is anticipated to evolve in the future to become taller, more culturally uniform, and more androgynous." She began investigations into how the body needs to be positioned in order to be load bearing by conducting scans of her own body carrying signifcant weight. These investigations evolved into a 1:1 routed sculpture, which aimed to demonstrate how the caryatids and atlantes could embody new forms of design, production and fabrication. "The figures are also evocative; the lead statues that inhabit the pit of the nuclear fallout shelter pay homage to the depletion of this resource, as well as representing solidarity, uniformity and protection in the face of danger."

Britain holds its Centennial National Exhibition, inkeeping with the precedent set by the Great Exhibition of 1851 and the 1951 Festival of Britain. The opening ceremony is attended by King William V, now aged 69. The Mount Pleasant site is earmarked as a site for the 2151 exhibition. In 2028, The International Space Station is decommissioned. Instead of being dumped in the Pacific Ocean like its predecessor, elements of the European funded Columbus module are rescued and rehoused at the Mount Pleasant site, in preparation for the Great Exhibition.

World lead reserves are depleted. Due to the anticipated future threat of nuclear warfare, a fallout shelter is constructed underneath the main atrium (nuclear shelters are typically built from lead and concrete). Lead statues line the walls of this shelter, paying homage to this depleted material.

The English language as it was known in 2015 becomes unintelligible. The proposals structural transparency is essential for securing its future.

Powered by gallium indium phosphide cells, this piece of submerged infrastructure serves as a node for new fishing communities in a newly flooded world. The habitual glow it produces on the surface of the sea is a haunting reminder of a disappeared territory — a capital city gradually swallowed by the rising sea over the course of 10,000 years.

World sand resources are depleted as a result of overconsumption in the booming construction industry; increased fracking worldwide and countries building extensive new territories out at sea. Sand as an aggregate in the construction of concrete is replaced by a variety of diferent building slags and other waste materials. Silica sand still remains in plentiful supply so glass construction is not affected.

Reminiscent of the blue plaques that delineate the historical signifcance of a building, Planning Plaque symbolises the longevity of a permission embodied in the form of an elegant timepiece.