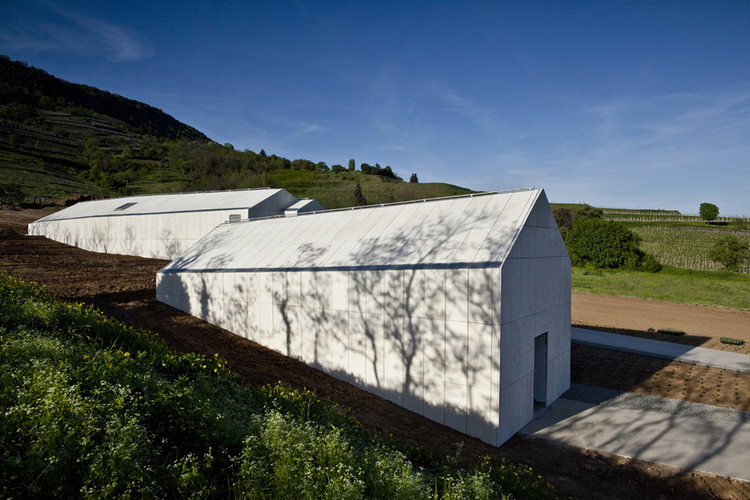 Text description provided by the architects. The wines of the Laposa-Cellar following the millennium became well known amongst Hungarian wine drinkers under the brand name “Bazaltbor” or Basalt wine. Their growing regions are only on the basalt hills – in Badacsony, Somló, on Szentgyörgy-hill and Csobánc – which is the reason for the characteristic mineral aromas of the wines that mirror their terroir. The cellar founding father, Dr József Laposa, Landscape Designer, and his son, the current manager Bence, today harvest from over 20 hectares local and international varieties, amongst others Szürkebarát, Juhfark, Olasz- and Rajnai Riesling or Kéknyelű. The market entry and dynamic growth of the cellar has also resulted in the expansion of the technological and tourism areas. During the development, besides increasing the scale, the aim on both an architectural and viticultural level was to modernise and maintain the making and presentation of the basalt wine.

The wine making activity moved down to the foot of the hill, to Badacsonytomaj, from the previous family cellar that operated in the southern side of Badacsony. With the freeing up of the old winery, a catering / tasting section and in connection with this also a small hotel will be built on the site emphasising the extraordinary panorama of Lake Balaton that opens up from there. The upper regions, which serve vine growing as well as relaxation, and the lower viticultural processing plant become connected by the revitalisation and recultivation of the vine regions of the hillside. In addition, the wine route or educational path to be built will also present this organic relationship.

The entire region is part of the Balaton Highland National Park, whilst however the upper section of the wine route belongs more to the natural landscape (as well as to the cultivated and terraced vineyard hillsides), the processing building on the lower site form part of the single level free standing style of the town. Whereas the urbanising process is only characteristic of recent decades, in general the viticulture of the Balaton Highland, (fundamentally rooted in its character, by its nature,”) has to connect more with nature.

An important question then is with what formal method can the building which is of a relatively large-scale compared with its environment be managed. The single reference point can only be the earthbound architecture of the vine (the press house and the retaining wall) as well as nature itself.

Being bound to the earth as a result of the programme should be taken literally: building shall take place downwards along the gravitational principle, so that the grapes are exposed only to the most necessary procedures. This way only a quarter of the total area of the vinery is above ground, the rest is contained in the belly of the hill.

On this basis we cannot work with architectural tools, forms, structures and clear archi(tectonic) matches in a traditional sense, but at the same time we cannot reject them entirely either. The viticultural building has to be like a model, but the hierarchic organisational structure is not an exclusive factor for this.

In the geometric model two basic elements – the symmetric gable, closed roof abstraction of the press house and the hexagonal shaped idealised cross section of the basalt pillars-layers – connect together into a new system, which at the same time is also a reminder of both references. The basic elements – as the basalt bands that erupted to the surface – run freely, in any direction where there are no obstacles; sometimes separating, sometimes joining. The dimensions of the geometrical basic elements (cross sections) are variable, thus flowing into each other, in places rising from the soil and providing a distorted surface on the roof.

The building is composed of connected panel elements, which were cast as monolithic visible concrete. The neutrality and rigidity of this is primarily detectable in the internal spaces and their relationship. There were two places where the dressing of the model, thus the addition of secondary ornamentation was necessary: when meeting the outside and at the cellar section for barrel maturation. For the former, following the principle of being like a model, the differentiation of the facades and the roof is missing; their homogenous covering is made up of prefabricated fine concrete facing panels, with a slightly transformed pattern of grapevines climbing and twining around them. If natural lighting needs to be provided in the inside spaces, the bands in the reinforced concrete model, following its geometry, were replaced by a light structure and glass cladding and the facing panel by a perforated metal sheet. Naturally the same grapevine pattern continues on this latter one, pulling it together into a unified surface.

The other ornament is to be found in the inside, in the deepest branch of the cellar. Although this space is of a longitudinal nature with a barrel shape, like a traditional cellar, its axis is broken several times and its structure is from reinforced concrete as part of the model. This bent-broken surface is covered by a brick layer characteristic of traditional cellars, but not according to the principles of tectonic order and brick binding, but diagonally, appearing as a woven fabric.

Inside of the model, the structural order and the sequence of the spaces follow the wine making process in both a vertical and horizontal sense. The processing building consists of a technological wing of more industrial nature and an integrally linked brick covered cellar wing with ripening / storage functions. The two parts at the same time are separated by the floor plan and really form the two wings of a building. The line of cellars is covered by a layer of soil which is over five metres thick, with only the entrance rising above ground level. Only one of the three levels of the technological wing is above ground, the remaining two are underground with access being provided to the cellar wing at the lowest level.

According to the gravitational system, grape processing takes place at zero level, in the middle of the building, with connections at soil level: following selection and separation of the berries the grape is placed into the receiving containers or tanks that are sunk into the floor. From here it passes on to the mobile press which is usually a level beneath, then to one more level deeper, now in the form of must, into the fermentation steel containers or the fermentation and ripening barrels. This central section is two storeys high and also has a direct connection to the processing space above through a floor opening. The press moves on a gantry that is suspended in the airspace. The vertical transport core is also located in this large space with stairs and a freight elevator. In line with gravitation the red wine barrel maturation can be found on the lower level and the maturation barrels for white wines in the cellar wing. The wine exiting the barrels reaches the bottling room on the zero level through the developed pump system, where the wine returns to the deeper levels with the help of the freight elevator. There are four bottle maturation rooms available, differing in size and climate.

At ground level there are two separate entrances in the technological wing for receiving the grape and for delivering bottles. The processing and labelling-storing space is accordingly behind them. The two-story reception area, which also houses bottle maturation in the southern direction and is linked to the cellar wing, also has entrances from the road and from Lake Balaton: guests who are also interested in the wine making itself are welcomed here.

The visible concrete cover supports the unified consideration of the internal spaces, which in reality is independent of the functions taking place within it. The displayed furnishing is characteristically technological, thus objects (tanks) or lateral pipe fittings and matching lighting fixtures of an “industrial appearance” are uniformly made of stainless steel. All installations are made separately from the structure and assembled, with an alignment following the directions of the model geometry and the roof ridge. The slotted soak-away that runs along the building is also in line with this concept, it removes liquids from the solid, non-slip epoxy floor covering, which is easily cleaned but at the same time resistant to industrial and cleaning water as well as chemicals. Such secondary units, as the social block, the laboratory and the mechanical spaces are located on the top floor. The external air technology unit and the aggregated technological cooling system have been located close to the central core, although still outside and along the western wall, being at the same height as the internal level, but at the same time sunken compared to the ground. 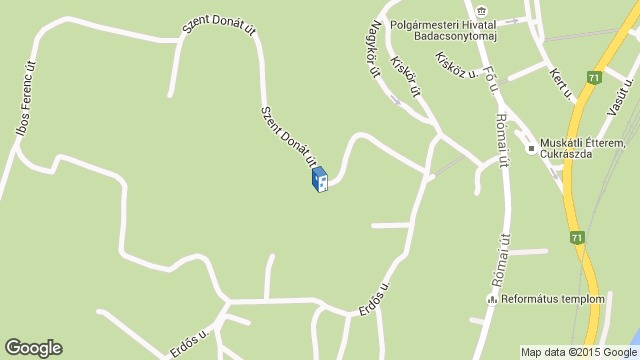 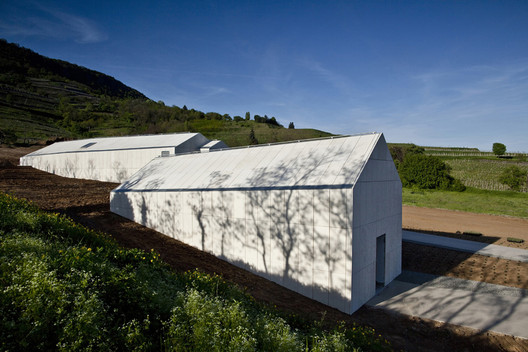