Paris has approved its first tower in over 40 years; the city council has agreed to move forward with Herzog & de Meuron's 180-meter-tall "Triangle Tower" - or "Tour Triangle" - after initially rejecting the proposal last year. The controversial plans have been the center of an intense debate since its unveiling in 2008 on whether or not Paris should preserve its 19-century skyline.

As Gizmodo reports, the Swiss architects sold the tower to the city by claiming its glass facade will "disappear" into the skyline.

“Almost everything the architects say has one message: This building is invisible,” as Foreign Policy pointed out last year. “As if to reinforce this strange duality, the renderings omit Paris’s one true existing skyscraper: the wildly unpopular Tour Montparnasse, built in 1973.”

Once built, the tower will be Paris' third tallest structure, after the 324-meter Eiffel Tower and 209-meter Montparnasse Tower. It will house a 130-room hotel, restaurant, Sky Bark and 70,000-square-meters of office space.

The building will be the city's first tower realized after its height limitations were removed in 2010, which prohibited the construction of buildings over 36 meters.

News via Gizmodo, The Independent 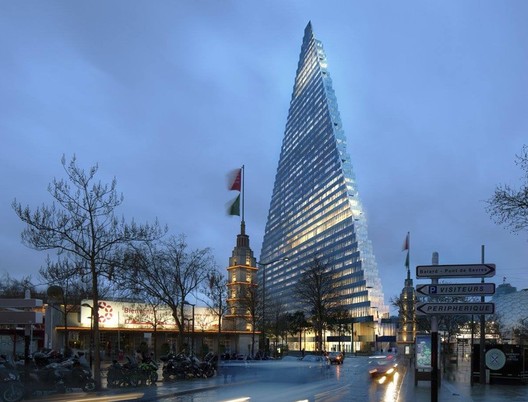