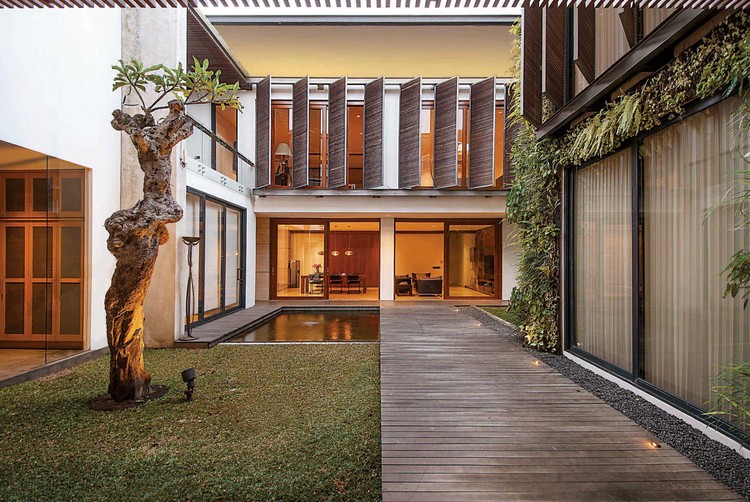 Text description provided by the architects. This modern house is actually two houses being designed as one building. Two families live there. It was built in 2011 to 2013 on a relatively even site of 597 square metres and designed in accordance to the Owner’s wishes, that is, to become a manageable, compact and harmonious house.

Manageable means that the house has a hierarchical room programming according to the public, semi-private and private areas. The private area are on the upper floor whereas the ground floor is made to accommodate semi-private activities such as dining and family gathering on each house. The courtyard is meant as a public area as well as an intermediary between the houses.

Compact means that it has a linear room organization and all rooms are facing the courtyard. Even the entrance to these houses is part of the courtyard’s terrace. This courtyard is also to allow maximum natural light and air into each house while the terrace becomes an intermediation between public and semi-private areas.

Having a limitation of void as a green open space, the concept of green wall or vertical garden is applied in combination with a pond to bring cosiness. Ulin wood is placed for floor covering that connects the two houses to bring more tropical nuance while the green wall is to reduce the heat of sunlight from the West. To unite all elements of exterior, interior and landscape, we combines variety of materials such as wood, marble, travertine, basalt stone, iron and cement.

Openings at the frontage are limited due to its orientation towards the West. However, the facade is made under a singular concept so as to look like a compact building. 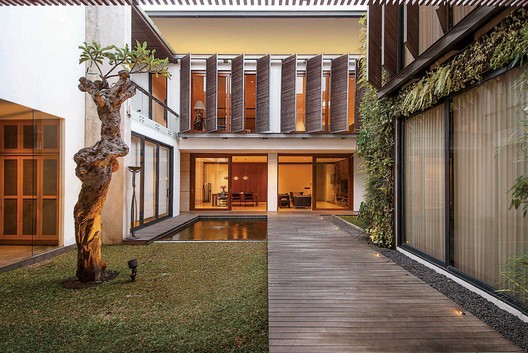