Hoping to reverse the fortunes of this small but distinctive area of Chicago, real estate development firm R2 Companies and urban planning group PORT Urbanism have teamed up to devise a plan to renew Goose Island. A man-made island with a long history of manufacturing, Goose Island lacks the revenue stream of many other Chicago regions, but the development team hopes to improve conditions by 2025 by enabling it to develop into a sustainable, high-tech neighborhood connected to Chicago’s urban grid. 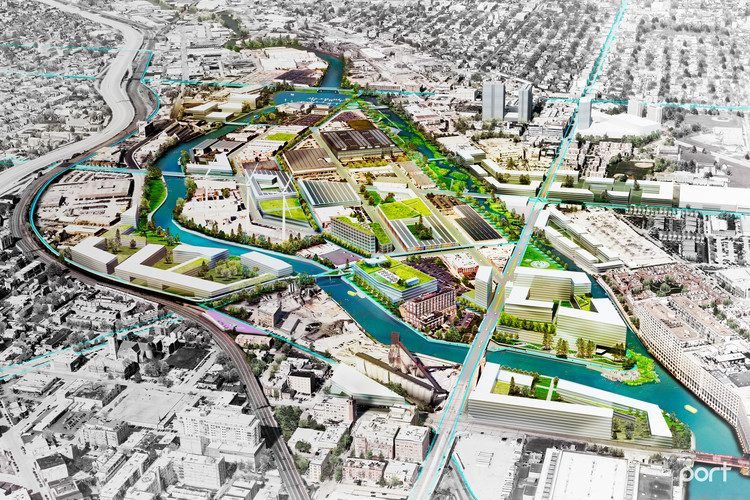 Created in 1853 by the dredging of the North Branch Canal, Goose Island was a major manufacturing and shipping center for almost one hundred years, but after World War II, manufacturing companies began to move to move to the suburbs, and fewer jobs were available. After a lengthy economic slump, the city began to see an upturn in economic conditions when legislators created incentives for developers to build in Chicago - but in spite of organizations like the Wrigley Corporation and Kendall College who have made Goose Island their home, the area has not kept up fiscally with other parts of Chicago.

The response to the economic problems that plagued Goose Island is simultaneously a demonstration of renewed corporate interest in urban environments and an exercise in creating design elements that encourage public interest in urban development. To achieve both of these, the project embraces the technology-loving spirit of recent years, firmly grounding it in current innovation that will likely continue to develop and play a role in the world economy for years to come. Sustainability measures such as enormous arrays of solar panels, water run-off systems, and rainwater collection systems as well as up-to-date offices and manufacturing plants fill the proposal, bolstering Chicago's burgeoning technology industry and establishing Goose Island as an important manufacturing center for the American Midwest.

For R2 and PORT, reinvigorating Goose Island is also process of connecting to the rest of the city. The team has created a system of innovative circulatory and infrastructural pathways that reconnect the island to make it an attractive destination for individuals and businesses alike; the project would add pedestrian and vehicular bridges, as well as train and water-taxi stops. The North Branch River Canal would become a water garden, allowing for kayakers to safely explore part of Chicago, and providing an attractive recreation and exercise area for bicyclists.

For the development team, the proposal does not represent a completed idea - rather they hope their proposal can be the beginning of a long-term discussion on a region with plenty of potential for economic growth. Mick Senner, of the real estate company Colliers International, astutely described the ambition of the team’s project in a remark to Crain’s Chicago Business:

“It’s like something you’d see at a world’s fair, because some of it’s never going to happen. But to (R2’s) credit, they’re thinking about what can happen there, and some of that stuff definitely will happen. They’re the ones who are really trying to make something happen there, which translates to jobs.”

For R2 Companies, the design developed with PORT Urbanism will serve as a guiding vision as it adds plots of land on the island to its portfolio. But perhaps more importantly, the design offers a vision to other companies which will encourage them to invest in the area, and present a unified goal for Goose Island once they do.

Find out more about the Goose Island 2025 proposal here. 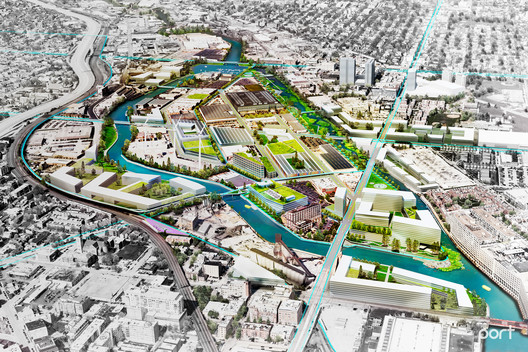