Text description provided by the architects. The urban expansion of the capital advances beyond its borders, as well as toward other urban centers of the country, and the skyline changes, so present in the lives of its inhabitants.

Thus arises a new contour of the city where the visual is different from what is expected in urbanization projects from the master plan by Lucio Costa. The gated communities, proliferated by the controversial belief in creating safe spaces, alter the landscape and deprive residents of interrelationships present in conventional cities. But paradoxically, only in these isolated areas are there rare opportunities to project the renunciation of "front enclosure", either by the obligation imposed by the very rules of the condo or the perceived sense of security in its residents. And it was this feature - to integrate the house into the street - what offered the project guidelines for the design of the residence.

As a siting strategy to enhance the land use and alignment with the sun, the house occupies one of the sides of the site, ensuring the best possible use of the 700 m2 site. In addition, we meet the demand of the clients to not have a single garden in the back, but a green and leisure space that can be accessed throughout the entire length of the house. The internal organization of the spaces, in turn, occurs along the circulation axis in the north facade, which connects all the environments of the site.

The north gable, in turn, is then converted into a grand structural wall instead of enclosure. An element of protection for different sun paths releases the south facade, more open, almost like stilts.

A sequence of contained environments within a structural modulation of 5.2 meters defined the social and service areas on the site, and the private spaces on the upper floor. The position of the garage on a semi buried floor enabled a terrace on the roof that defines the interaction between the public space and the privacy necessary for the pool. A large metal pergola provides the necessary shade to the balcony of the pool and the afternoon conversations on the terrace of the garage.

The profile of the clients, who value the road and contact with the neighborhood, contributed to addressing an open project that is related to its environment. 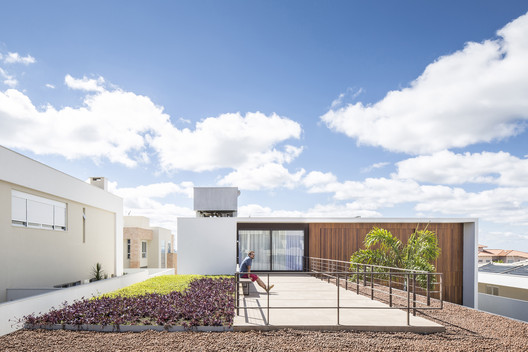 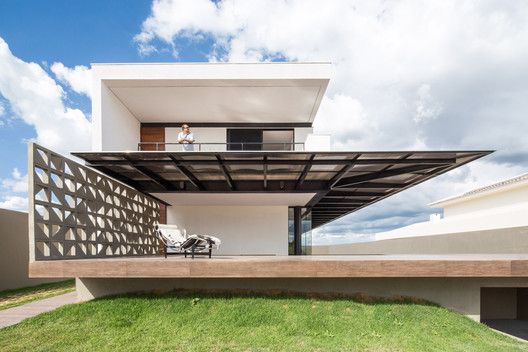