The violent insertion of Daniel Libeskind’s Spiral into the Victorian neighborhood of South Kensington renders a cataclysmic disruption into a landscape of order and propriety. It envisions a rupture in the fabric of space and time, aggressively anachronistic from the building it adjoins, unapologetically appealing not to cultured humanism but to the mathematical logic of complexity and chaos. What is now textbook "Libeskind" was in 1996 a shocking non-starter for the London establishment, an unacceptable risk for a city perpetually torn between its agitated cosmopolitan energies and its quintessential impulse toward nostalgia and restraint. Nearly twenty years after the Spiral was selected as the winner of a distinguished international competition, this controversial extension proposal for the Victoria and Albert Museum remains unbuilt. 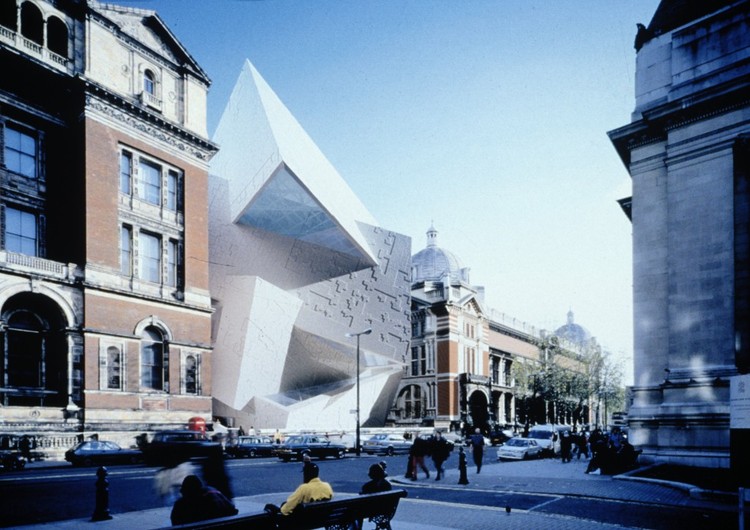 The project's nonfulfillment is perhaps its most enduring legacy, but the design broke ground in other ways. When Libeskind's proposal was released amid great fanfare to the public, it was on the leading edge of a turn toward what Charles Jencks refers to as "Nonlinear Architecture," a "new shared language of expression ... more in tune with an unfolding, jumping cosmos than the rigid architectures of the past." [1] Jencks was fascinated by Libeskind's project and held it up as an example of the "aesthetic of undulating movement" that he correctly predicted would consume global architecture in the new millennium. The Spiral also coincided with (and partly triggered) the rise of Libeskind's stardom. While prompting the very outcry that felled its realization, its destabilizing audacity sent shock waves through the architecture establishment and attracted a bevy of client-suitors that ensured the architect's future success.

The project begins as a single tectonic strip folded into itself in an upward spiral six layers high. Although the disheveled geometries of the Spiral appear uncontrolled and deconstructed, they are quite the opposite, resulting from a single creative apparatus whose movements are governed by an organized process. As the irregular sequence of trapezoidal and rhomboid walls accelerates upward, the planes collide into each other, creating a series of box-like shapes that interpenetrate and seem to crush the hollows below. Jagged floorplates are inserted into the enclosed volume, stabilized by the presence of a strong vertical core that anchors the turbulent energy swirling around it. The resulting structure is scaleless, governed not by its relationship to the human occupant but by the mathematical principles behind its generation; devoid of its context, it could just as intelligibly be three times larger or the size of an elegant paperweight.

Check out a spectacular animation of the design process here.

While the folded walls play a powerful formal role, they are also structural. Calculated using advanced digital computational models, forces are channeled through the precipitously angled walls, allowing the interior gallery spaces to remain open and column-free. This feat of engineering, spearheaded by the acclaimed studio of Cecil Balmond, is all the more remarkable given the design's unusual tectonic conditions: unsupported planes running diagonally through space, misaligned with their neighbors, cantilevered at will.

Balmond's other major contribution to the project was his work on the exterior skin. An interlocking pattern of tessellated tiles, each derived from a manipulated golden rectangle, sheathes the exterior surfaces. According to Studio Balmond's website, this "mathematical mosaic... illustrates the sequential nature of the building's spiral form." Dancing across the folded walls like pixelated static, these tiles are animated by the same dialectic of chaos and control that pervades the project's entirety. Inspired by the geometry of fractals, they attempt to channel an energy that is cosmic and infinite.

The Spiral’s linguistic and scalar tensions with its surroundings constitute the source of both its conceptual strength and its political weakness. The Victorian and Edwardian architecture of the V&A’s accretions, historicist and eclectic, engages and activates Libeskind's creation. But for the proposal's detractors, this dialogue came at too heavy a cost to the existing landscape, overshadowing if not defacing the older structures. One apoplectic critic famously predicted that the Spiral's confrontational incongruence would leave the museum "visually raped." [2]

Despite securing a significant portion of its projected $160 million cost from private donors, the controversial proposal was repeatedly denied public funding. When it was rejected for lottery funds for a third time in 2004, Libeskind's design was finally scrapped. [3] The frustrated architect, whose career had since taken off through major commissions in Berlin and New York, parted ways with the museum shortly thereafter. [4] While he was never able to see his visions fully realized, he was able to reconfigure them last year on a smaller scale for a sculpture in Almeria. In this defanged, lesser iteration, impotent in its pastoral solitude, it becomes clear how critical the urban context was in activating the Spiral's rhetorical polemic and revealing the potency of its cosmic aspirations. 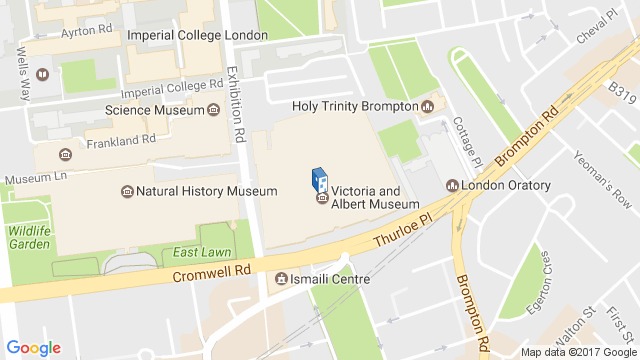 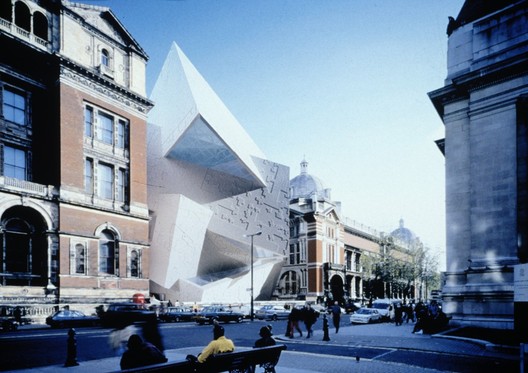