Save
Horse on the Ceiling / Zauberscho(e)n 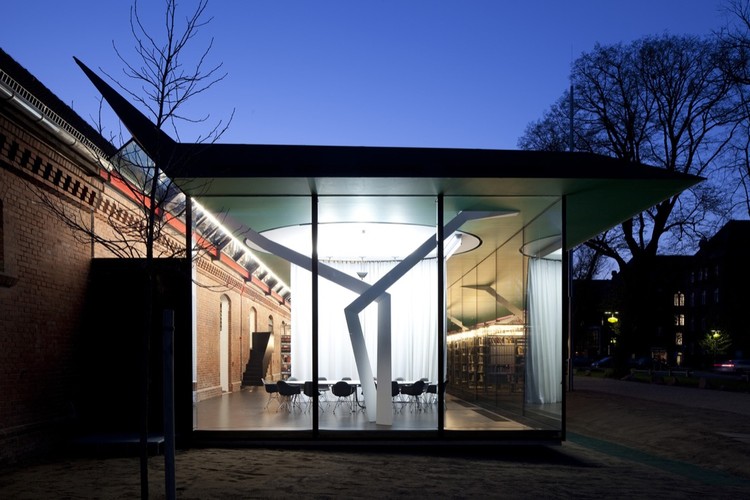 Text description provided by the architects. The Leonardo Campus in the north of Muenster forms with the academy of art, the muenster school of architecture and the school of design a creative-campus on the site of a former trooper barrack. the book inventories of all three institutions are merged in a library and stand behind the walls of a part of the former horse stables. the shelves required more space. but where?

In the past horses stood in front of the stables, now the books are going to stand there. They are framed by a glass facade, whose large-sized glass panels are reinforced by glass fins. This facade out of especially clear glass shapes the building through its great transparency. The books so become during daytime and especially at night from the outside an important focus of the university campus and so form a memorable sign of education.

The space is devided into three parts and offers different working atmospheres to the students. Up front the facade developes into three study-carrels for an undisturbed learning, in the rear stands a large table for groups, separable as required through an acoustic curtain. As a transformable element it can form an individual thinking-zone or open up a larger area. The outside is printed with a digitally generated motive on the basis of the “School of Athens“ by Raphael. Through its indifference the curtain gene- rates a constantly changing relation to space.

Gottfried Sempers postulate for polychromy and his conclusion that color has a less bawling effect than glaring plain white becomes clear in the interaction of intense green ceiling and black floor with the chromaticity of the trees outside and the brick color of the surrounding buildings. Looking through the facade the surrounding appears in high gloss, much more colorful as this can be experienced outside the building.

In the rear of the building the wing-like roof rests on three columns. Their form is orienta- ted on a moment of movement of the leg of a horse who have been moving there in former times. They are digitally generated and a product of a computer supported, modern steel technology.

In Muenster it proverbial rains a lot. Along an open cullis on the entire length of the building the rainfall is being staged and becomes a spacial experience as it drops down like a curtain in form of a second layer in front of the glass facade. The rainwater is being collected in an infiltration ditch in front of the building and returned ecologically to the terrain.

Between new and old roof a light gap illuminates the historic stable wall. Stairs and openings in the wall prevent standstill and contribute to an interconnection of historic building and new extension.

The extension of the Library for Architecture, Art and Design emerged from a design project on the münster school of architecture. The building has been completed in April 2010. On the occasion of this project the student planning team zauberscho(e)n has been founded in june 2008. The realisation has been carried out together with Bühler and Bühler Prof. Dipl.-Ing. Architects, Munich. 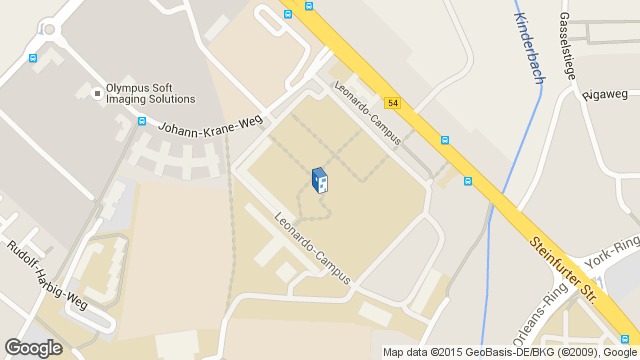