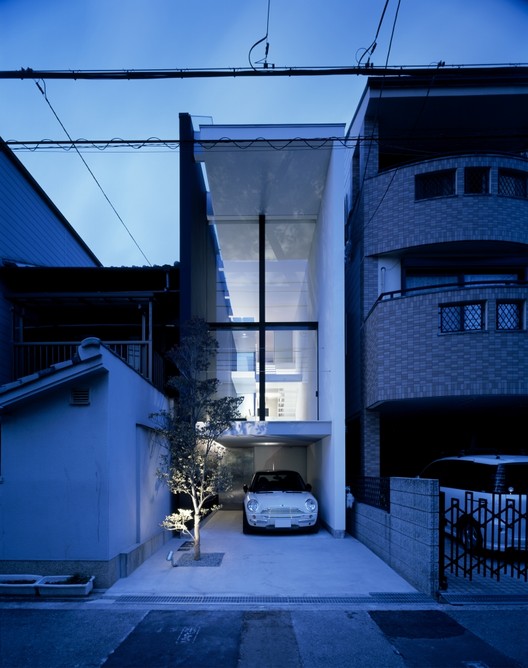 Text description provided by the architects. Showa-cho is a quiet place even though it is downtown. There are many people residency from a long time ago. The design of the residence has a narrow frontage, which is a part of a row house (17.89m x 3.94m). The design of the residence is that the street in front of the house could be a part of scenery rather than to be closed towards the street.

A big problem in the progress of the planning was that it could take only less than 3 meters for effective flange width inside when it was built in such a long narrow lot. According to this condition, it was studied many times on how it could have an expansive feeling and continuity from the street side to the end of the back of the house.

The main solution was to use cross section construction. From the south side that faces the street, a tree (Ternstroemia gymnanthera) was planted. The living room has 5.6m of ceiling height, "stairwell and stairs spaces", "4 layers of construction from basement to 3rd floor each rooms", "a small outside stairwell". Each floor is not piled up, but adopted the skip floor method, which made a gap. This method made it possible to see the outside street from the back rooms so, that it could be unified with outside of the house and create a larger atmosphere.

Despite the stairs being in the center of the house it is not blocking the view of outside. Glass was used for every partition wall. Slits were also made on the floors and ceilings. From these effects, the house can be unified with the outside and therefore create a larger atmosphere within the house.

In general, when constructing on a small plot of land, planning tends to take on the idea of making the property spacious, but keeping privacy inside within the property. In such a case, the façade would normally be built with a wall, but then it would create an enclosed and pressured atmosphere. Since the Showa-cho property is a small plot of land, the house was constructed with a courtyard to follow the building coverage ratio by using almost all of ratio.

In this case, the house in Showa-cho, deliberately included the city side to scenery and made façade by planting a tree in the space in front of the house that made it could be seen inside of the house, too.