During this week’s “Alternatives for Low Carbon City Architecture and Life” conference in Shenzhen, China, we sat down with Rocco Yim to ask him how his work—driven by his interest in connecting cultures— is related to the pursuit of low-carbon or sustainable design. Yim explained the core values that motivate his approach to design, revealing his attitudes towards technologically-driven design solutions. Read on to see what Yim believes to be the essence of succesful urban spaces.

ArchDaily: Your main research interest is in reconnecting cultures, so from a low-carbon or sustainability point of view, how do you think these two topics are interchangeable or related to each other?

Rocco Yim: Well, first of all, my interest in connecting cultures arises from my belief that architecture is not just an art. The biggest mistake is to think that architects are artists. That’s what is responsible for a lot of…how should I say this…junk that we see.

Now so in that respect, I have highlighted a number of cultures that I think are relevant to architecture. The one that I haven’t highlighted really is sustainability. The reason that I haven’t highlighted that is because I think sustainability or the concern for the environment is a given; it doesn’t need to be highlighted. It has been there all along. And it’s not particular to any country or region or any race. It’s a universal value, something that our ancestors upheld in one way or the other but it is something that because of the advance of technology and because of our belief, especially in the last century, that we are above nature that we tend to overlook it.

So, when I talk about reconnecting cultures, for instance, the values of spatial quality, of community, of urban connectivity — these things differ from city to city. But these are indirectly related to sustainability issues.

Take connectivity: when we talk about connectivity, we talk about the wish for contemporary human beings and city dwellers to move about freely, and in so doing, increases opportunities for encounter and interaction, emphasizing convenience and efficiency. And that, in a way, has been exemplified in a city like Hong Kong, where spatial connectivity really has been, in certain areas, not in all areas, has really been given an expression and an emphasis that is lacking in Shenzhen.

But connectivity is also a sustainability issue. Because when you move about freely, without hinderance, and in a manner in which you feel happy, you forget about your vehicles. You just walk about. The Central Elevated Walkways in Hong Kong is a good example of a sustainability measure because it allows a lot of people to forsake the bus, forsake a taxi, and just go about from the residential area to the CBD just on foot.

So, the emphasis I put on the making of architecture and these pursuits of culture and values, is not in conflict with creating a low-carbon city. And, in fact, when we look for a low-carbon city or low-carbon district, a lot of the prerequisites that we are looking for are in fact simply tied to good urban design.

For instance: that spaces are human-scale, human-friendly, areas have a sense of place so it encourages people to use it and enjoy it. It encourages a love of the environment, because you only love it if you’re happy in it. And when you love it, then you care about not damaging trees, picking up garbage or putting garbage in the correct container— and all of these are behaviors which are essential to low-carbon living. Behavior, not any particular technology or sophisticated mechanism, but simply behavior. If you love your place you care for it and you care for how you save energy and water and the general conditions. So that’s the very essence of low-carbon living.

It also has to do with a fundamental principle, I would stress, of what sustainability is. What sustainability means, at the end of the day, is reducing waste as much as possible. Reducing waste means therefore using as best as you can the resources that you have, including land resources and how to make the best use of the land resources. Which means that if you allocate spaces for parks or squares and that it’s used as much as possible and loved by the people; that it’s not left there, empty.

A lot of the problem in China’s cities is that we see lots of green, but it’s not used. And that, I would say, is not a good use of resources and therefore it is not sustainable no matter how green it looks, or no matter how many square-meters you allocate for trees. At the end of the day in a city—whether it’s a low-carbon city or whether it’s simply good urban design—we’re looking for the same things.

Now, when you deal with low-carbon cities there are certain technologies or methodologies, and that is something else, but I don’t think that’s important. Maybe it’s essential, but the most important thing is the mindset in design, in using it and in operating it.

Rocco Yim founded his own practice in 1979, and was one of the co-founders of Rocco Design Partners in 1982. Rocco Design Architects is a Chinese architectural practice based in Hong Kong.

The preceding interview took place during the Alternatives for Low Carbon City, Architecture and Life (ALCCAL) Forum & Exhibition in Pingdi, Shenzhen, China on Jun 17th-18th, 2015. Hosted by the Shenzhen Center for Design, the forum and exhibition featured presentations of the results of the PINGDI 1.1 Alternatives for Low Carbon Architecture competition. 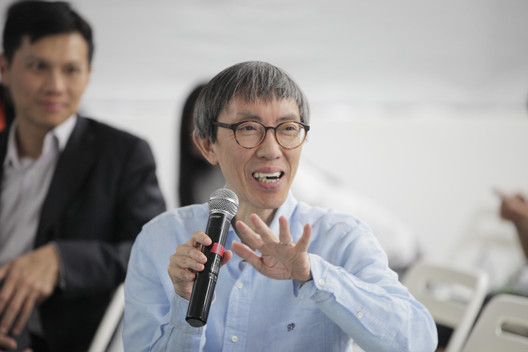